Accessibility links
Greek Leader Vows To Stick To Austerity Plan Greek Prime Minister Papandreou pushed aside popular unrest and defections within his own party, refusing to back down from harsh measures designed to pull the country out of a major debt crisis. 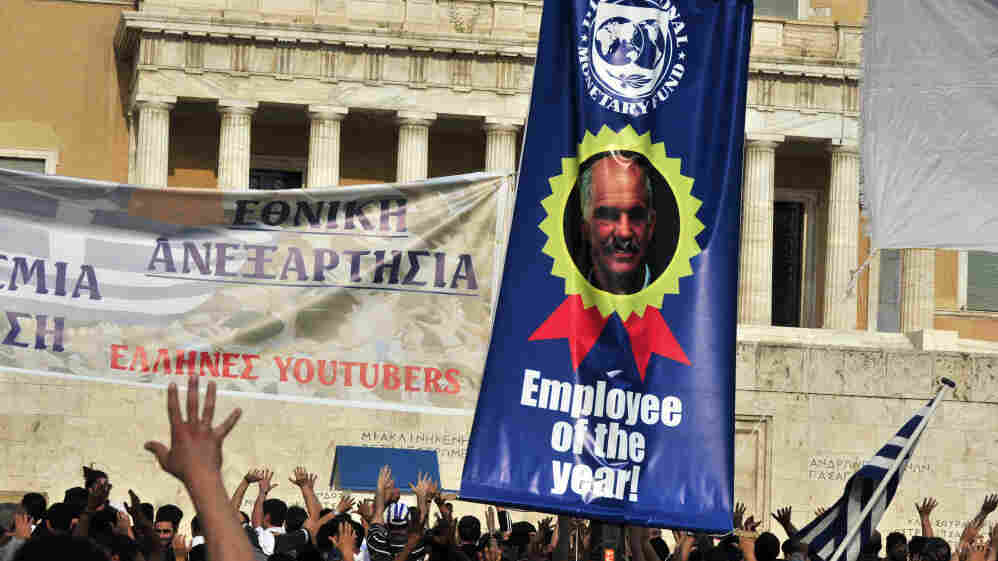 Protesters demonstrate in front of the Greek Parliament in Athens on Wednesday with a banner criticizing Prime Minister George Papandreou as an International Monetary Fund employee of the year. Louisa Gouliamaki/AFP/Getty Images hide caption 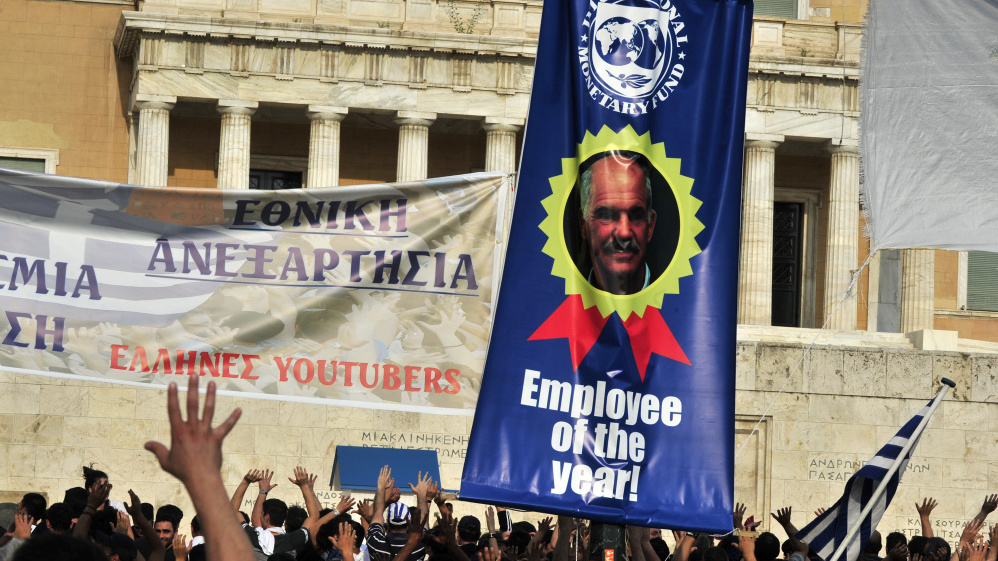 Protesters demonstrate in front of the Greek Parliament in Athens on Wednesday with a banner criticizing Prime Minister George Papandreou as an International Monetary Fund employee of the year.

Greece's prime minister on Thursday pushed aside popular unrest and defections within his own party, refusing to back down from harsh austerity measures designed to pull the country out of a major debt crisis.

The political system is rotting. ... The country is not being governed the way it should be.

George Papandreou said he would stay the course on reforms and would reach out to other political parties to find support for the changes.

"Our response to the challenges we face is stability and to stay on our course of reforms," he told lawmakers at an emergency meeting of the ruling Socialist party.

Papandreou admitted his government had displayed "mistakes and weaknesses," but promised a new, stronger Cabinet in a reshuffling.

The establishment of a new Cabinet is an apparent move to regain the confidence of both Greeks and the financial markets, but Papandreou's hopes for party unity ahead of the reshuffle fell apart after two of his party's prominent deputies resigned.

The collapse Wednesday of talks to form a coalition government triggered a sell-off in global financial markets. Investors are worried that a default in Greece could hurt banks elsewhere and set off a financial chain reaction that some experts predict would be catastrophic.

After the negotiations broke down, Papandreou announced the reshuffle and requested a vote of confidence in Parliament, a tactic he hoped would help get new taxes and spending cuts approved before Greece was cut off from international lending.

Although the defections don't affect the Socialists' five-seat majority in Parliament, political analyst John Psaropoulos told NPR there are "rumors that others were in the process" of also defecting.

The prime minister has faced withering public criticism over the new five-year package of cuts to spending that creditors have demanded in return for continued funding from the $155 billion international bailout. Market turmoil reflects waning confidence that Papandreou can win the austerity vote.

"The political system is rotting. ... The country is not being governed the way it should be," said Socialist deputy Nikos Salagianis. "A reshuffle will not resolve the country's problems."

Trying to quiet the criticism, the Socialists announced the emergency talks for Thursday afternoon. But Psaropoulos said it appeared only to delay the inevitable and predicted a "day of reckoning" for the government when the unpopular austerity measures come up for a vote again.

Athens University law professor Aristides Hatzis told NPR a national vote appeared to be the only way out of the impasse.

"The government that will govern Greece after this difficult moment must have legitimacy, and the only way to acquire legitimacy in a democracy is to have elections," Hatzis said.

Fears that a messy Greek default may be in the offing have sent the euro down nearly 4 cents over the past few days to below $1.41. The worries also triggered widespread selling in stock markets and pushed the Greek yield on its 10-year bonds up to more than 18 percent, a record.

The next week is crucial for Greece. Finance ministers of the 17-nation eurozone are expected to thrash out details of a second Greek bailout to be presented to EU leaders. It's extremely unlikely that another rescue deal will be offered if the Greek Parliament fails to back the austerity measures.

"We expect the Greek Parliament to endorse the economic reform program as agreed by the end of June," Rehn said. "The efforts needed to avoid a default — which would be a catastrophe for Greece — are the responsibility of all political forces."

The European Union's economic chief said Greece was expected to receive its latest $17 billion installment of bailout loans Sunday, saving it from the immediate risk of default. However, a decision on a new longer-term bailout will be delayed until July amid disagreement over the role of private investors.

The vote of confidence called by Papandreou was expected to take place as early as Sunday.

Joanna Kakissis in Athens and The Associated Press contributed to this report.