Accessibility links
S. Sudan Battles Poaching In Quest For Tourism Officials in the emerging nation hope people will one day think of it for its wildlife, not war. So it's taking steps to track the animals for anti-poaching efforts. South Sudan's economy now relies on oil, "but these animals will be there for life if we manage them well," an official says. 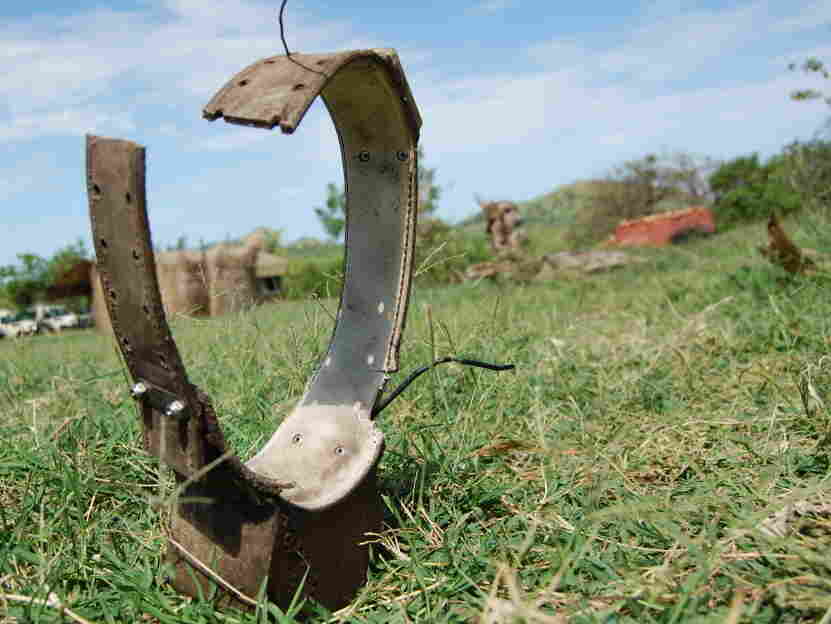 A radio-tracking collar worn by a tiang was cut off by hunters after the animal was shot. Conservationists track wildlife in South Sudan to help the government devise anti-poaching strategies after decades of devastating civil war. Frank Langfitt/NPR hide caption 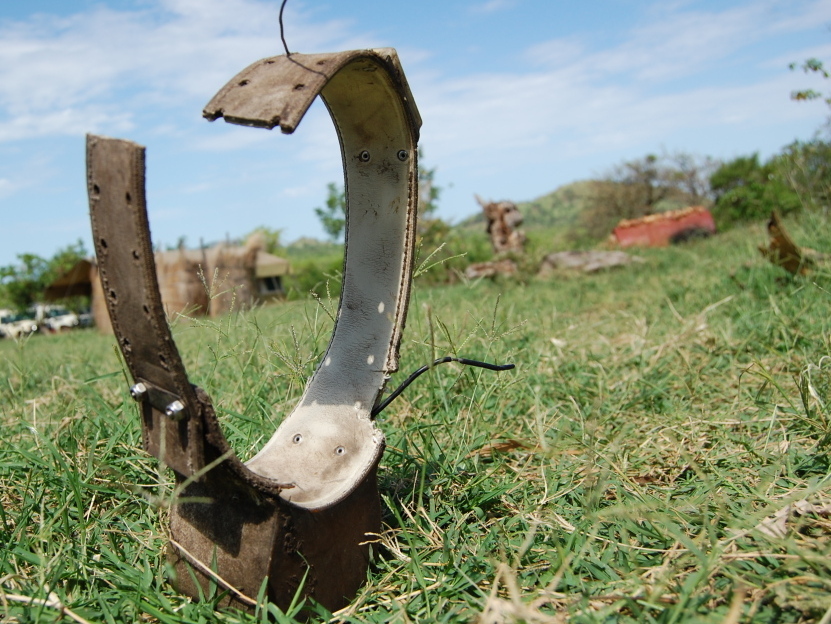 A radio-tracking collar worn by a tiang was cut off by hunters after the animal was shot. Conservationists track wildlife in South Sudan to help the government devise anti-poaching strategies after decades of devastating civil war.

When people think of Sudan, they think burning villages, civil war. Wildlife tourism? Not really. But South Sudan wants to change that.

Next month, it will secede and become the world's newest nation, and officials there want people to come see the animals.

It turns out many antelopes, elephants and even some giraffes survived the civil war between the north and the south. Now, South Sudan is trying to protect them and build a tourism business — from scratch.

Paul Elkan returns to his bush camp in South Sudan's Boma National Park one recent morning carrying a radio-tracking collar. Elkan, who works for the New York-based Wildlife Conservation Society, found the collar lying in the savanna, about 5 miles away. It's cut clean through, the edges chewed up by a knife. The antelope that wore it? Long dead.

"The animal was shot, this tiang," Elkan says. "And then the hunters cut the collar off and obviously they were cutting little pieces on each side — maybe they were trying to find gold. ... They didn't know what they had."

Elkan says he has lost a couple of tiang and white-eared kobs — both types of antelope — to hunters, and a few elephants as well. He's tracking the migration patterns of the animals to help the government build strategies to protect them from poachers.

After more than 20 years of war, most wildlife in South Sudan was thought to be dead. But in aerial surveys a few years ago, Elkan and his team found an estimated 5,000 elephants and more than 1 million antelopes.

"You have one of the last great intact wildernesses in Africa, and you have the world's second-largest land mammal migration," Elkan says.

If only the government here can keep it going. The war left South Sudan awash in AK-47s. Relative peace and new roads have made it easier for poachers to find game. South Sudan has park rangers, but they are undermanned and often outgunned.

"Our force is not able to contain the poaching because it is over a vast area — our parks are very large," says Minnisona Peter, head of wildlife management for South Sudan. He says the worst poachers are members of the national army.

"The soldiers contributed a big amount; I would say 60 percent," Peter says.

A Region In Turmoil

Peter says some soldiers poach animals to sell to South Sudan's growing commercial bush meat market, while others kill to feed their families. Once, he tried to arrest a soldier on his own.

"He was just coming from the bush with his meat on his head and a gun on his shoulder. So, I was asking, 'Why do you do this?' He just threatened, [saying] I should not disturb him because he had not been paid money, so that is the only way they can live — do I want to kill him with hunger?"

Peter was unarmed, so he let the soldier go.

Jonathan Wright, who runs Wildplaces Africa, a tour company in neighboring Uganda, sees potential in South Sudan. But first, he says, the government has to fence off areas to protect the surviving animals so they can breed.

"For example, say you're talking about a species like tiang or topi," Wright says. "You'd put in anywhere from ... 30 or 40 animals into that area where they can live normally and are protected against cats and poachers. And gradually as those populations breed up, you start releasing into the wild the captive population."

Even if South Sudan can protect the animals, it's a challenge to persuade people to come see them in a place synonymous with war. Wright acknowledges it will take years to educate potential tourists.

Recent events have not helped. The northern Sudanese army sent tanks into a disputed border area last month, resulting in more than 100 deaths and tens of thousands of refugees.

Wright points out that Boma National Park is nowhere near the volatile north-south border — and the main conflict there is cattle-raiding.

"The people are generally nomadic cattle herders," he says. "Really, their main interest is not being rebels and charging around. Actually, their lives are like normal people. So I've never really found that these people are very difficult to deal with — unless you have a cow."

Wright has applied to the government of South Sudan to run high-end tours, and he says five groups have already asked to go. 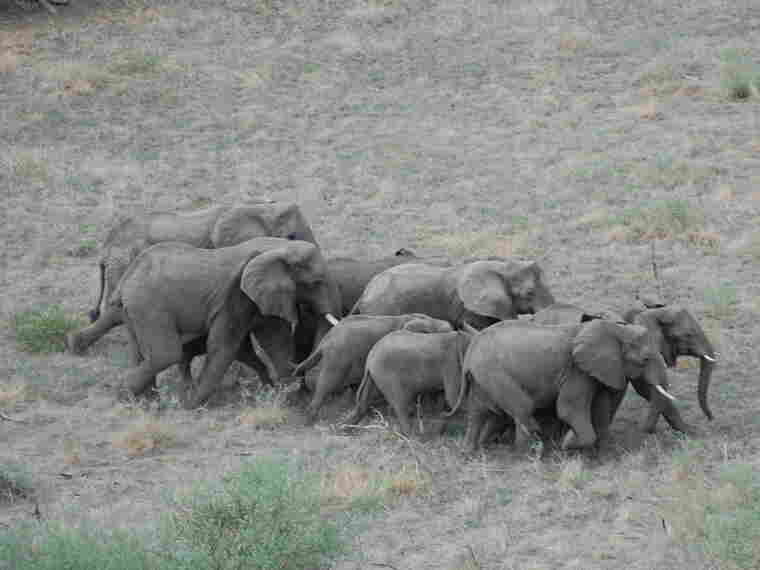 A herd of elephants crosses the bush in South Sudan, which will become the world's newest nation in July. South Sudan relies economically on oil but hopes to someday attract tourists to visit its wildlife. Frank Langfitt/NPR hide caption 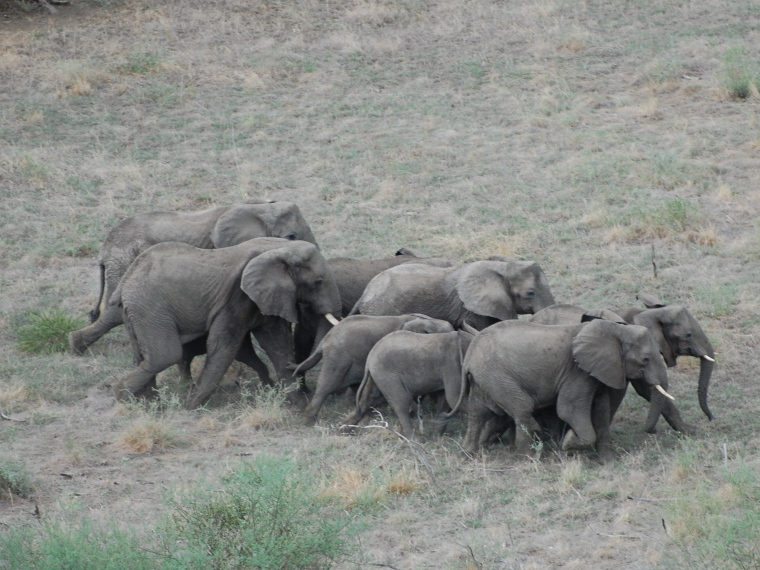 A herd of elephants crosses the bush in South Sudan, which will become the world's newest nation in July. South Sudan relies economically on oil but hopes to someday attract tourists to visit its wildlife.

"We would put seasonal camps for three to four months whilst the migration is going through," he says. "We would want to bring in horse riding into it; it's always a great way to get around a savanna habitat."

It's ambitious for a region that has almost no infrastructure, but Wright says that's part of the appeal — and marketing pitch — to adventure travelers.

"You know, that pure sense of Africa," Wright says. "The vast spaces and wilderness. You know, the Africa before Karen Blixen [author of Out of Africa] came. Sudan still has that."

South Sudan could certainly use the tourists: The economy is based entirely on oil, which doesn't create lots of jobs.

Wani says he hopes South Sudan can establish independence next month with little bloodshed and build a sustainable peace. Years from now, he hopes when people hear the name of this new country, they won't think of war anymore.

But maybe, just maybe, they might come to see the elephants, antelopes and giraffes.