Accessibility links
Campaign Protests Saudi Arabia's Ban On Women Behind The Wheel A fatwa, a religious edict announced by clerics in Saudi Arabia, prohibits women from driving. A social media campaign calls for Saudi women to defy the ban and hit the road on Friday. Host Michel Martin discusses the "Women-2-Drive" campaign with Hala Aldosari, a Saudi blogger who is part of the campaign, and Ali Alyami, executive director of the U.S.-based Center for Democracy and Human Rights in Saudi Arabia. His group is leading a "driving protest" in Washington D.C. on Friday.

A fatwa, a religious edict announced by clerics in Saudi Arabia, prohibits women from driving. A social media campaign calls for Saudi women to defy the ban and hit the road on Friday. Host Michel Martin discusses the "Women-2-Drive" campaign with Hala Aldosari, a Saudi blogger who is part of the campaign, and Ali Alyami, executive director of the U.S.-based Center for Democracy and Human Rights in Saudi Arabia. His group is leading a "driving protest" in Washington D.C. on Friday. 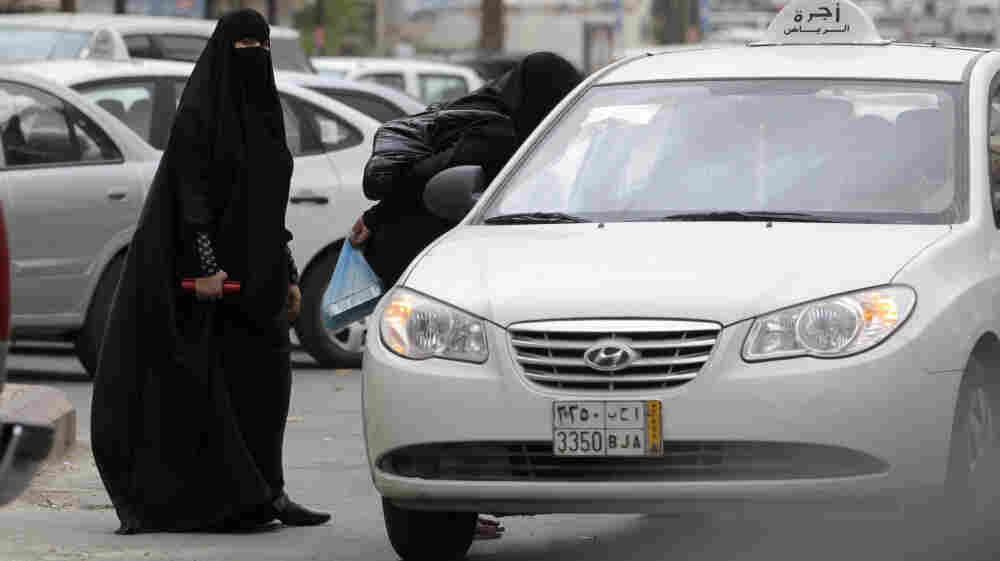 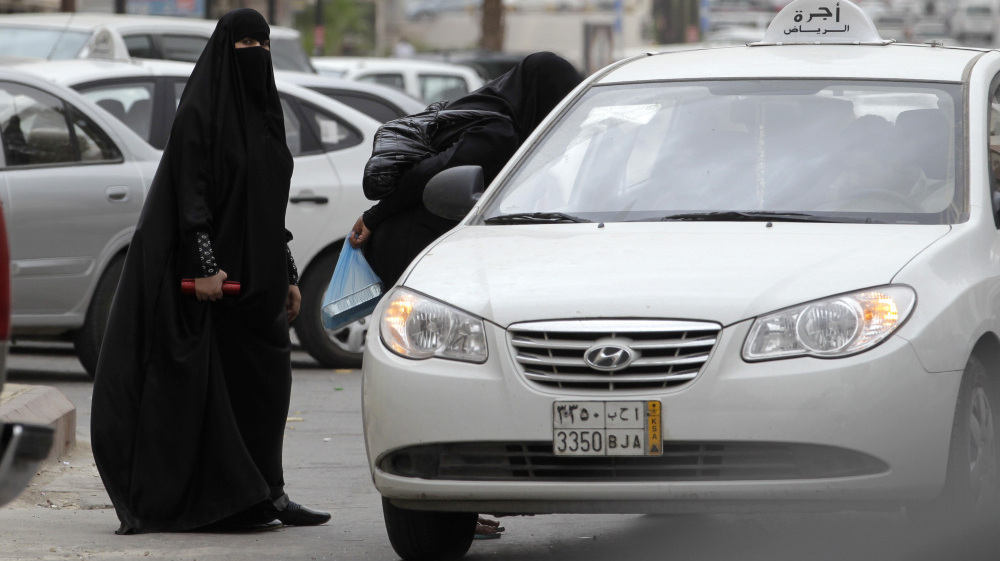 Saudi women enter a taxi in Riyadh, Saudi Arabia, in May.

I'm Michel Martin and this is TELL ME MORE from NPR News.

Y: In Saudi Arabia, should a woman's place be in the driver's seat? You may know that in that country, women are banned from driving. And apparently it's not actually a law. It comes from a religious fatwa, a religious ruling. And the ban is the focus this week of a worldwide protest bolstered by a YouTube video. Here is sound from that video of a Saudi Arabian woman, Minal al-Sharif, behind the wheel, defying the ban.

MARTIN: She's saying, we are ignorant and illiterate when it comes to driving. You'll find a woman with a PhD, a professor at a college and she doesn't know how to drive. We want change in the country. At least a woman sometimes during an emergency, what is she going to do?

So, now, with help from thousands of friends on Twitter and Facebook, Minal al-Sharif is calling for women throughout Saudi Arabia who are capable of it, to drive themselves to work, drive their kids to school and drive to the market or the shopping center without a guardian or a male driver. And to do this tomorrow.

Here to talk about this Women-2-Drive campaign is Hala Aldosari. She's a Saudi woman who's studying here in the U.S. She's a PhD student in health research with an emphasis on violence against Saudi women. She also blogs in both Arabic and English.

Thank you both so much for joining us.

MARTIN: Mr. Alyami, I'm just going to ask you to just clarify one thing. There's no law against women driving. How did this ban come about? And how is it enforced?

ALYAMI: Women have - Saudi women have never been allowed to drive since the establishment of the Saudi states. However, Aramco, the oil company - a compound where Minal al-Sharif works, because it's mostly for foreign people. A woman could drive in that little town - Aramco compound.

MARTIN: They can. Hala, why is it important for you to try to get rid of this ban? And why did you want to participate in this protest to try to achieve that goal?

ALDOSARI: I have to clarify one thing - women are driving in Saudi Arabia in rural areas and in certain compounds, women are driving. And there is a law that hasn't been released to the public, except after Minal's arrest. That law was enacted by the ministry of interior during the '90s. It is (unintelligible) fatwa for the (unintelligible), who stated that woman driving is not allowed because of the problems that might - they are having if a woman is alone on the street.

MARTIN: Do you mind if I ask what it was like for you when you first got behind the wheel?

ALDOSARI: I think because of general good order of traffic here and the streets where I live are not as crowded, so it was fairly easy for me to start driving, and really liberating.

MARTIN: Ali Alyami, what are some of the arguments that have been used to maintain this prohibition, which is unique? Is there any other Muslim country in which women are not permitted to drive or - even though we do take your point, Hala, that women are driving, you know, they are driving in certain places. But they're not officially permitted to do so.

ALYAMI: And that is also extremely small number, the ones who are allowed to drive. But Saudi Arabia is the only country in this planet where women are not allowed to drive. Some of the arguments the system is using both the autocratic and theocratic regimes in Saudi Arabia - and there are two of them - is it's our tradition or our religion. It is a nonsensical argument. Of course I'm sure, you know, culture and religions in every society have something to do with people, functions and way of life.

The woman 40, 50, 60 years ago have more rights in Saudi Arabia than they do today, actually.

MARTIN: Now, you, as I mentioned, you're the founder of the Center for Democracy and Human Rights in Saudi Arabia. Why do you see this as a human rights issue?

ALYAMI: A very basic human rights - mobility. If you need to move from place to place, you have to be able to do that, especially in this day and age. If your child gets sick or dying and you want to drive your child to an emergency room, that's a basic human right to save your child. It's a very empowering and good feeling to be independent instead of relying on me as a man to take you from place to place.

MARTIN: Once again, this is TELL ME MORE from NPR News.

Ali Alyami is also with us. He's the executive director of the Washington-based Center for Democracy and Human Rights in Saudi Arabia, which helped organize the driving protests.

And, so, Hala, what's your argument for why women should be able to drive?

ALDOSARI: Because it's a basic human right. And as Dr. Ali just mentioned, most of the women who are affected by that are the middle class - the women who have to work, who have to tend to the family, who feel that that's relying on a driver who has to be (unintelligible) a different country, with different backgrounds - moral backgrounds and ethical backgrounds. And having to accommodate this driver in your home and be responsible for him just so he can take you from one place to the other is way too limiting. And it puts you at more risk. It puts you at a social risk and it puts you at an inconvenience.

ALDOSARI: A lot of harassment cases happened because of the - you know, those drivers - we live in a very restricted social living. They are away from their family and friends and they come from, you know, and just basically you don't know a thing about the competence of a driver that you're recruiting. You're just bringing in a person that you don't know at all, and to trust him with your children and you trust him with your family - because you don't have any option but that.

MARTIN: Finally, before we let you go, what is your sense of - Hala, I'll start with you - what do you see? Do you see there - any progress being made toward lifting this ban?

ALDOSARI: I hope so. I hope that the decision maker for them respond to the people - we don't want more women to go to the streets - we don't want conflict. Or we don't have to stand for basic rights and in front of the streets and demand it. We want a peaceful management of our demands without any problems with authorities.

MARTIN: Mr. Alyami, what do you think? In fact, there's been, apparently some cables that were leaked from WikiLeaks, that indicate that the Obama administration has quietly been urging the Saudi government to lift this ban. Although, Minal al-Sharif was arrested for organizing the online campaign, initially. But there have been severe repercussion for women who have protested this ban in the past. So, what do you think?

That's all it takes in Saudi Arabia. And he's the king and he's a very powerful man and it could actually work. So, yes, it's coming. There is no way this is going to be stopped.

MARTIN: Ali Alyami is executive director and founder of the Center for Democracy and Human Rights in Saudi Arabia, which helped organize the driving protests in Washington, D.C. around the Saudi Arabia embassy.

MARTIN: And it's happening tomorrow.

Hala Aldosari is a Saudi woman who's studying here in the U.S. She's a PhD candidate and she also blogs in both Arabic and English. Thank you both so much for joining us.