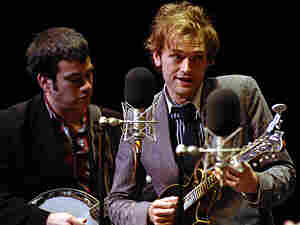 Selections from Thile's epic chamber work for bluegrass instruments — the four-movement, 40-minute "The Blind Leaving the Blind" — highlight this live performance from an episode of Mountain Stage recorded in May 2008. Also included here is "Punch Bowl" and "It'll Happen" from the group's official debut, Punch, and a tune from How to Grow a Woman from the Ground, a CD recorded by the same band under Chris Thile's name.