Accessibility links
Bucky Pizzarelli On Piano Jazz The guitarist plays the swinging tunes of the 1930s with his son and guest host, John Pizzarelli. 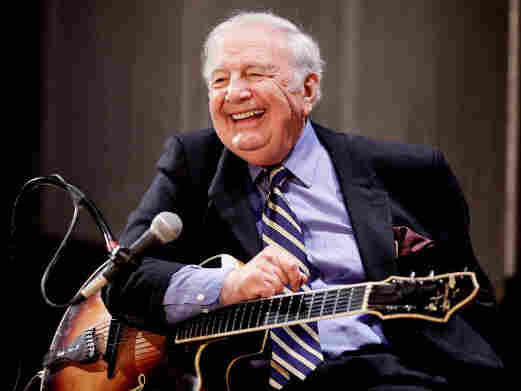 "They Can't Take That Away from Me" (G. Gershwin, I. Gershwin)

Bucky Pizzarelli began his professional career at age 17, when he joined the Vaughn Monroe dance band. In 1952, he became a staff musician for NBC and eventually joined Doc Severinsen's band on The Tonight Show Starring Johnny Carson. Along the way, he played with many of the biggest names in jazz. On this episode, Pizzarelli plays the swinging guitar tunes of the 1930s and '40s on his custom seven-string guitar.

The session starts swinging with a cheerful guitar duet on "Tangerine." The senior Pizzarelli remembers learning to play guitar from watching his uncles.

"They used sit and play at our house on Sunday afternoon, and that was the entertainment," Bucky Pizzarelli says. "I wanted to join in. They bought me a guitar and I learned everything they knew."

Pizzarelli called one of those tunes, "Sweet Sue," for a duet that carries on the family tradition, as father and son trade solos over an easy tempo.

Both Pizzarellis play instruments equipped with an extra low A-string, which expands the guitar's range to include bass lines. George Van Eps is credited with adding the seventh string to the jazz guitar in the 1930s, and Bucky Pizzarelli learned to play the instrument from him.

Pizzarelli also played with many other legendary guitarists such as Les Paul, Django Reinhardt, George Barnes and other jazz players like Stephane Grappelli and Benny Goodman, to name a few. He also worked with pianist and fellow Piano Jazz alum John Bunch, who passed away this week. Guest host John Pizzarelli is still clearly awed by his father's career: "I find it amazing that all of those guys you heard on the radio as a kid in New Jersey, you ended up playing with and being friends with them."

The guitarists get into a speedy duet on the next tune, "Pick Yourself Up," with some fleet-fingered fretwork and staccato solo lines. And they change things up a bit with John adding vocals on the next two tunes: the Nat King Cole-inspired "It's Only A Paper Moon" — a favorite of Bucky's — and a version of "My Blue Heaven" that borrows a page from pianist Dave McKenna.

A medley of Ray Noble tunes follows: "I Hadn't Anyone 'Til You" and "The Very Thought of You." This arrangement proves fertile ground for the lush tone of both guitars, and the additional low A-string figures prominently in both songs, giving this duet a more orchestral feel.

Rooted In Big Band And Django

Bucky Pizzarelli's playing is firmly rooted in the swing and big band sounds of the 1930s and '40s, when the guitar became an important rhythm instrument thanks to the electric amplifier. But guitar solos took center stage in smaller, unplugged settings, and none were more widely known than those of Gypsy jazz guitarist Django Reinhardt. On this Piano Jazz, the Pizzarellis pay homage to Reinhardt with his signature tune, "Nuages." From the brightly floating melody in the opening bars to speedy, two-fingered Gypsy chords at the bridge, father and son enjoy working out on this guitar milestone together, and they polish the tune off with a few harmonics.

Before their last duet, the senior Pizzarelli closes this session with a few words of advice for aspiring jazz guitarists: "People like the melody. When you're playing someone else's music, be aware that you owe them the melody." The two guitarists finish with a Piano Jazz favorite, "In a Mellow Tone," by Duke Ellington.

"Thanks very much, pops," says John Pizzarelli. "That was great!"