Accessibility links
Syrian Activist Dodges Authorities On Streets, Online Mohammed Feezo, a Syrian cyber-activist who brought his family to southeastern Turkey, says the Internet allowed opponents of the Assad regime to follow the examples of Tunisia and Egypt. But "even if they cut the Internet in the whole country," he predicts, "the protests will continue." 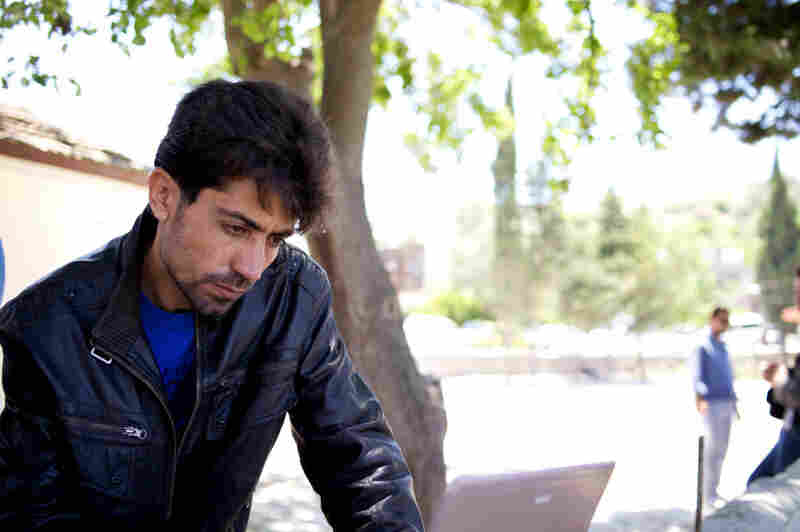 Syrian activist Mohammed Feezo, 32, with his laptop in the village of Guvecci in southeastern Turkey, overlooking the Syrian border. He brought his wife and children here for safety, but intends to return to Syria to continue the uprising against the government. Courtesy Clint Willey hide caption 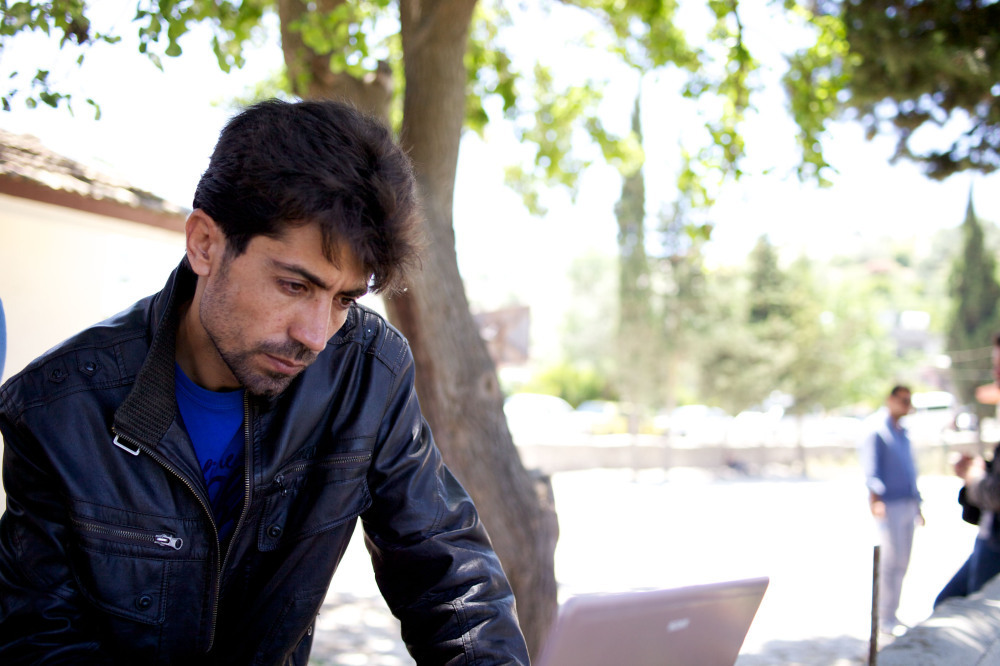 Syrian activist Mohammed Feezo, 32, with his laptop in the village of Guvecci in southeastern Turkey, overlooking the Syrian border. He brought his wife and children here for safety, but intends to return to Syria to continue the uprising against the government.

Mohammed Feezo, 32, unpacks his laptop in the windswept Turkish village of Guvecci, just a few miles from the hills of northern Syria, and looks for a network to connect to. Another 12-hour day online has begun.

A former worker at an iron factory in the coastal city of Latakia, Syria, Feezo seems an unlikely cyber-activist. But his Facebook page and online activities provide information and a sense of purpose and hope to Syrians desperate for change.

Born to a Sunni Muslim family in the northern town of Jisr al-Shughour, Feezo moved with his family to Latakia in the 1980s. There he encountered the discrimination that favors Syrian Allawites, who dominated the government of President Hafez al-Assad and continue to do so under his son Bashar.

He also got a taste of the power and reach of the dreaded mukhabarat, or secret police. After criticizing Syria's involvement in Lebanon one day in a coffee shop, he found himself under arrest.

"I was 24 when I was first arrested; it was horrible," he says. "They put me in a basement interrogation room. But they didn't even want information, their way is just to humiliate you.

"That's why I now use my real name," he added. "It's a kind of revenge, just to show them I'm not intimidated."

After being detained several times, Feezo decided that if the regime was determined to consider him an adversary, he might as well join the opposition.

At first Feezo had the same problem other opposition figures faced — how to communicate in the face of a highly evolved domestic spying apparatus that caused Syrians to adopt the saying, "Don't even talk to yourself. They'll hear you."

But then about five years ago he discovered the Internet, and a new world of possibilities began to open.

"I started using the Internet and I discovered it wasn't really on their radar. For instance, when they would detain me they would never ask me about anything I had written on the Internet," he says.

He says gradually more and more Syrians came to realize that the Internet offered a measure of virtual freedom.

"In the beginning, any discussion I had, I felt like people on the other end were still afraid, afraid to speak out," he says. "But then we began to realize that the government can't really monitor 6 million Internet users, so people began to get more brave. And I turned my Facebook page into a page with opposition comments."

Feezo says nonetheless, when he and his friends began calling for the initial demonstrations on March 15, they were terrified. They had no idea who would respond, since protests are so rare in Syria.

But when the Facebook page attracted 70,000 people in the first the week and grew to 150,000 soon after, they realized that Syrians were ready to follow Tunisians and Egyptians onto the streets, whatever the consequences.

Internet Has Its Limits

Three months and more than 1,000 deaths later — he believes the true number is much higher — Feezo is grappling with the downsides of Internet freedom, including the danger of forged documents being planted by the regime or sites being infiltrated or hacked.

He knows the government is adapting to the new reality of Internet-driven protest, just as the demonstrators are.

But he believes the movement has reached a critical mass that cannot be stopped.

"Yes, I think it's unstoppable," he says. "The government can affect it, by cutting the Internet. But in the end, the Internet is just a networking tool. It's the people in the streets who make the difference.

"Even if they cut the Internet in the whole country," he predicts, "the protests will continue."