Accessibility links
'The Death Of Klinghoffer' Returns To Face The Music The John Adams/Alice Goodman opera 'The Death of Klinghoffer' sparked bitter debate when it premiered in 1991. So it's not surprising that it hasn't been staged in this country in almost 20 years. Now Opera Theater of St. Louis is taking it on, with help from the community. 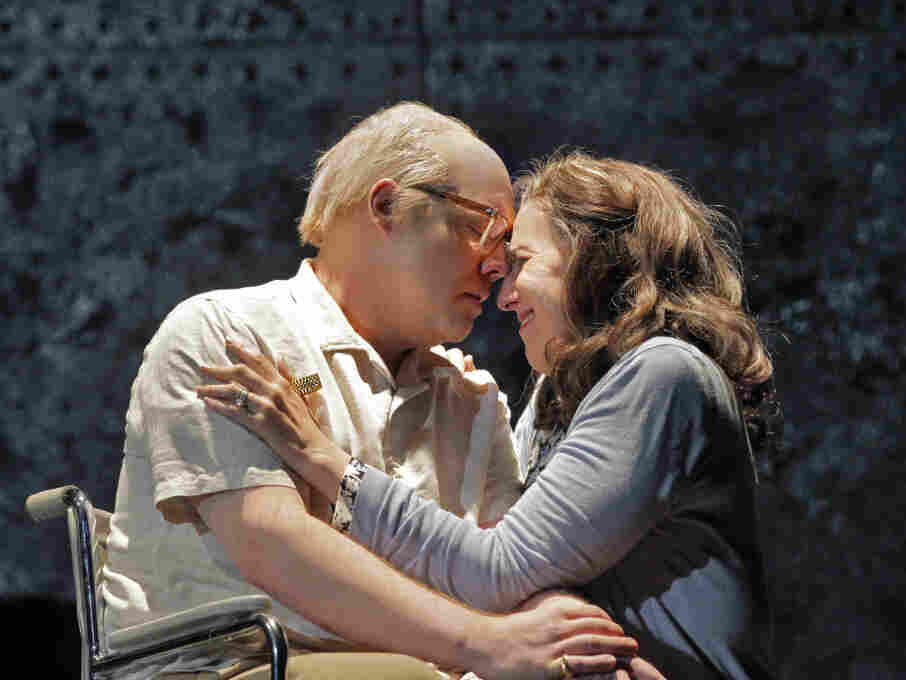 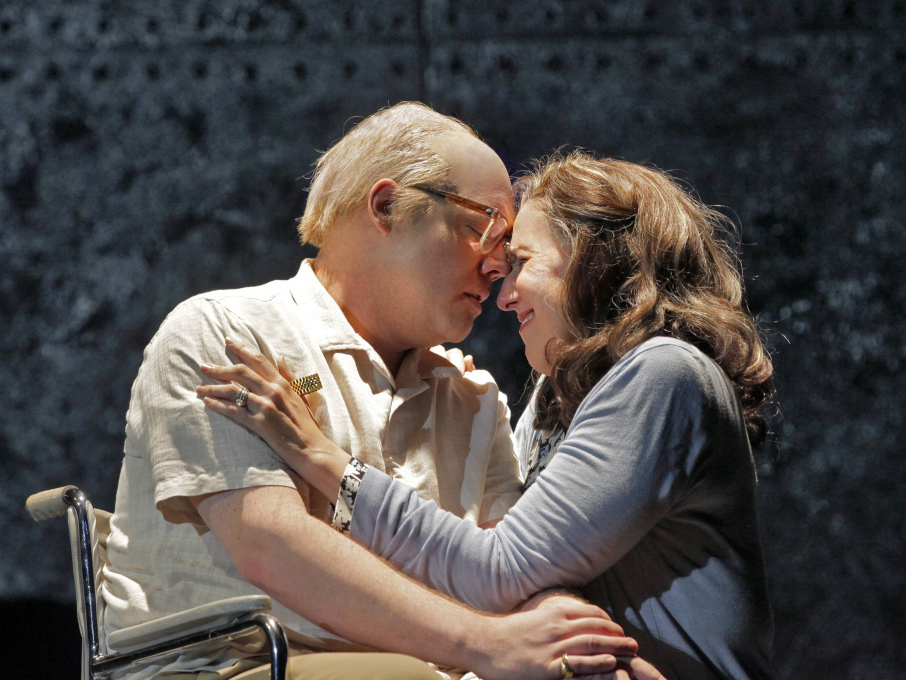 Brian Mulligan as Leon Klinghoffer and Nancy Maultsby as Marilyn Klinghoffer in the 2011 Opera Theatre of Saint Louis production of The Death of Klinghoffer.

It's been nearly 20 years since the John Adams/Alice Goodman/Peter Sellars/Mark Morris opera The Death of Klinghoffer has been given a full U.S. stage production; the last was in San Francisco in 1992. Perhaps that should come as no surprise, given the rancor stirred by its 1991 American premiere at the Brooklyn Academy of Music. But it's back at Opera Theater of St. Louis for the next week. Its revival has tried to address some of the issues and concerns raised by the controversial premiere.

The original artistic team tried to tackle the immensely complex issues behind the Middle East conflict through the headline-making story of Leon Klinghoffer. He and his wife Marilyn were celebrating their wedding anniversary aboard the Italian liner Achille Lauro, when the ship was hijacked by Palestinian terrorists off the Egyptian coast. The following day, they shot Klinghoffer as he sat in his wheelchair, then threw his body overboard.

Six years later, composer Adams and librettist Goodman completed an opera based on those events, and Adams says they expected some controversy.

"We were not naïve. We knew that choosing this theme was going to be a hot potato," Adams says. "You know the opera opened in Europe. It was first performed in Belgium and then in France and the reaction actually was sort of tepid. And I was mostly concerned I'd written a piece that hadn't made any impact. But then when it came to the United States, it became a real flash point for some very, very bitter debate."

The reviews were mixed. As Edward Rothstein wrote in the New York Times on September 7, 1991, "The work continues to give seemingly historical resonance to Palestinian wounds ... The plot doesn't gentrify the terrorists' acts, but their victims continue to be ... narrow in their focus and vision, singing primarily about their physical condition, revealing the simple-minded historical blindness that the avant-garde has long attributed to the bourgeoisie." Richard Dyer had this to say in the Boston Globe the same day: "There are those who enact the events in a perpetual present, a present charged by millennial hatreds — Leon and Marilyn Klinghoffer, four hijackers of contrasting temperaments. Each speaks out of central conviction; the opposing sides have skewed but real understanding of each other, which is all they can have, given their points of departure, which are their lives."

The Klinghoffer's daughters wrote a letter condemning the opera, saying in part, "The juxtaposition of the plight of the Palestinian people with the cold-blooded murder of an innocent disabled American Jew is both historically naïve and appalling."

Originally commissioned by the Brooklyn Academy of Music and five opera companies, two of them dropped out in the wake of the controversy. So when Opera Theatre of St. Louis General Director Timothy O'Leary, decided he wanted to revive the work, he knew he had to handle it differently. As a first step, O'Leary contacted community leaders including Batya Abramson-Goldstein, who directs the Jewish Community Relations Council in St. Louis.

"The question was never, 'Should Opera Theatre put on this opera?'" says Abramson-Goldstein. "The question I was asked was, 'Since the opera is being put on, are there ways that we might work together to make what plays out in St. Louis different?'"

Abramson-Goldstein and other community leaders participated in interfaith discussions, including one co-moderated by Muslim physician and professor Dr. Ghazala Hayat.

"We're going to stay away from the political because there's no way we can sit here and solve what happened or what's going on or what should be done or has not been done," Hayat said during the discussion. "I think basically you just have to look at it from the perspective of art. Art, if it's not for propaganda, it just tells you what every person or character is feeling — at least they want you to be in their shoes. And the more you get into their shoes, I think that's the strength of that art."

The consensus that's seemed to have emerged from the discussions is that although The Death of Klinghoffer presents many perspectives, it does not excuse the murder of Leon Klinghoffer or any form of terrorism. American conductor Michael Christie – who's conducted the work before in Europe – is conducting the St. Louis production, and he says it delivers its message subtly.

In one key scene, the captain of the hijacked ship tries to talk with one of the hijackers named Mamoud. But composer John Adams says the talk doesn't really lead anywhere: "After this long conversation, the captain sort of blandly and naïvely says, 'I think if you could talk like this, sitting among your enemies, peace would come.' And Mamoud, who has grown up in a horrible Palestinian refugee camp and has had a life with no hope, responds, 'The day that I and my enemies sit peacefully, each putting his case and working towards peace, that day our hope dies, and I shall die, too.'"

Adams says the tragedy of the opera is that the Klinghoffers were caught between two historical forces that continue to collide. And that makes the work just as relevant as it was 20 years ago.

"It's wrong to try to focus the opera entirely on that event," Adams says. "I mean, these people became victims of racial hatred that is as old as the Old Testament. So we're dealing, right from the start, with collisions of vast numbers of people and historical narratives that come into play, both on a vast, world-historical scale and on, you know, down to the marriage of a couple of Americans who've lived in New Jersey and they're taking a trip to the Holy Land."

There seems to be renewed interest in The Death of Klinghoffer, despite its difficult subject matter. After its St. Louis run, there will be another new production in London next year.