Accessibility links
Miles Davis: 'Kind of Blue' Miles Davis' Kind of Blue is frequently cited as being the best-selling jazz album in history. Released in 1959, this classic from the master trumpeter has sold more than five million copies and is still going. 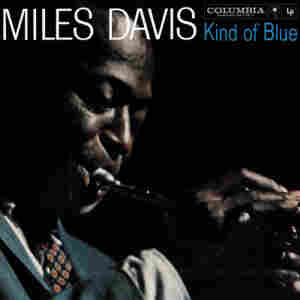 SPELLMAN: There's great depth to this record, too, I believe. And I know that every time that I listen to it I find some real bottom to it, something to ruminate over.

HORWITZ: It's true. The emotional range as well as the intellectual range of the music being played is phenomenal. There's a poignancy about the record, but you go from incredibly poignant to very joyous and playful, and sometimes in just a few notes.

SPELLMAN: The musicians on this record are not local talent.

HORWITZ: No. This is not the local "Dentists of Dixieland," you know. These are heroes, not just all-stars. And maybe the least-sung heroes are the rhythm players: the bassist, Paul Chambers, and the drummer Jimmy Cobb. They are there just as a solid foundation, and yet a melodic — even in the drums — accompaniment to everything that the more famous players are doing.

SPELLMAN: There's a unique and specific sound to this ensemble, I think, that adds to the depth and the color of it.

HORWITZ: You know people have asked recently, especially since we've been doing this Basic Jazz Record Library, A.B., "Are there some more albums like Kind of Blue. I mean, if we like Kind of Blue, what are some albums like that?" And you're right, with just the sheer sonic texture of this, there really aren't. It's mostly, I think, the collaboration among the players that just makes a whole that's greater than the sum of the parts.

SPELLMAN: One of the advantages of the LP record was that you could make a release which was like a suite in itself in the relationship of one tune to another. It seems to me that Kind of Blue is like a suite.

HORWITZ: I think that's very true. The pieces are sequenced in a way that they have certain functions. "So What" is the perfect opening tune...

HORWITZ: And you know, A.B., when the record gets at its "moodiest" in this sort of tone poem called "Blue in Green," he follows up immediately, Miles Davis does, with — and Irving Townsend, the producer of the record — with this great swinging blues, "All Blues."

SPELLMAN: And so for your NPR Basic Jazz Record Library, we are recommending Miles Davis' Kind of Blue. It's on the Sony/Columbia Records label. For NPR Jazz, I'm A.B. Spellman.