Accessibility links
Chick Corea: 'Return to Forever' Although 1972 is not usually considered a golden year for jazz, it did witness the release of a classic: Chuck Corea's Return to Forever. The Latin-tinged album successfully synthesizes elements of rock, jazz, and classical music. Don't miss the jazz standards "Spain," "La Fiesta," and "Windows." 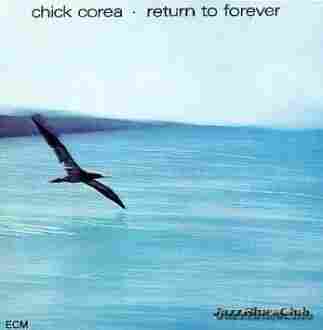 A.B. SPELLMAN, National Endowment for the Arts: Murray Horwitz, this is Chick Corea in 1972 — a transitional period for jazz, is it not?

MURRAY HORWITZ, American Film Institute: "Transitional" may be a kind way to say it, A.B. It's not what you'd call the golden age of jazz in America. But it might have been the beginning of a golden era for the influences of world music on jazz, and jazz becoming much more of an international art form.

SPELLMAN: Yes, and we also had electronic instruments coming into it. Every age makes its own instrument and the previous age puts them down, I've found, but here we have Chick Corea on a very great electric piano record.

HORWITZ: It's true and it's electric piano is not used in any way as a gimmick but really fits the musical mood of this CD.

HORWITZ: In the early '70s, there was a lot going on in music. There was rock and roll, there was the sort of long solos you got in avant garde jazz, and there were weird things happening in classical music. There was a lot of electronic music and new production techniques in pop music. And there were all these attempts to synthesize all this, and this CD is one of the most successful — I'd argue fully successful. The CD is Return to Forever.

SPELLMAN: Chick Corea seems to have chosen some musicians of disparate backgrounds, but who were all masters in their medium or in their styles, is that not so?

HORWITZ: And some of them were very young masters. There was Stanley Clarke, the bassist, who had played at the age of — I'm not certain of this — eighteen or something with Stan Getz. There's the incredible virtuosic Latin-American percussionist Aerto Morera, and the Brazilian singer, Flora Purim. And from the United States, the saxophonist and flutist Joe Farell.

SPELLMAN: Now, this record has what as its quality? What do people listen for here?

HORWITZ: A.B., I think that it has to do with what we talked about briefly: the synthesis. The fact that in Chick Corea, there was a compositional sensibility that could pull all these things together, but always with a terrific rhythmic pulse. I mean, people can argue. Does this swing? Does it rock? Does it do neither? Something is going on rhythmically that keeps the whole thing together at all times. And it works all the way through in a variety of grooves, including the terrific—I guess I'll call it a "Latin number" — "Fiesta."

SPELLMAN: The selection that we are recommending for your Basic Jazz Record Library today is Chick Corea's Return to Forever. It's available on ECM Records.