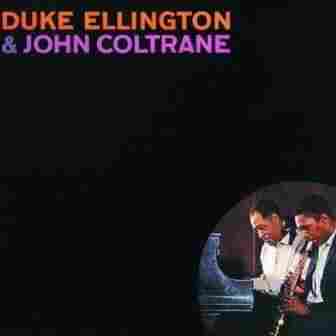 A.B. SPELLMAN, National Endowment for the Arts: Toward the end of his life, Duke Ellington started having collaborations with some of the other musicians who were of his stature, particularly some of the modernists. Here, we have Duke Ellington with John Coltrane. And just when you think he's fixing to do something, and coming out of that opening vamp, here comes John Coltrane as though out of a mist, or another world, or maybe just the apartment next door. It's all so beautiful. Murray Horwitz, I assume that's why we're adding this to our NPR Basic Jazz Record Library.

MURRAY HORWITZ, American Film Institute: This is one of those perfect albums we've talked about from time to time. What seemed astonishing in the early '60s, when this album came out, makes perfect sense in hindsight. All of these musicians play as if they were made for each other. Each headliner, Duke Ellington and John Coltrane, brought his own bassist and drummer to the session. They divided the accompaniments, and even mixed it up on one tune, but you can tell that Coltrane, Ellington, Elvin Jones, Jimmy Garrison, Aaron Bell, and Sam Woodyard understand one another's music perfectly.

SPELLMAN: And it makes sense, really. Ellington and Coltrane both loved the blues so well and were masters of it.

HORWITZ: That's right. That's where they meet most often in this recording on tunes like "Take the Coltrane" (get it) and "Stevie." In a very short span of time, they cover a lot of ground - blues, ballads, a Latin rhythm thing called "Angelica," and a piece called "The Feeling of Jazz." Believe me, the latter could be the title of the whole album.

SPELLMAN: It's a landmark, and a glorious confirmation of the greatness of these two musicians. That's why we're recommending it for your NPR Basic Jazz Record Library. The CD is Duke Ellington and John Coltrane. It's on the Impulse! label. For NPR Jazz, I'm A.B. Spellman.