Accessibility links
John Coltrane: 'John Coltrane and Johnny Hartman' Although he was a solo artist for only seven years, John Coltrane became one of the most renowned saxophonists in history. In 1963, Coltrane teamed with Johnny Hartman to record this classic compilation of ballads. It was Hartman's first record in eight years. 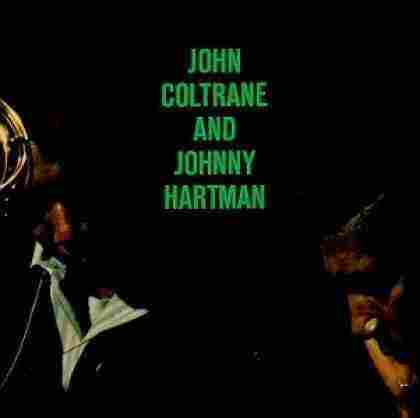 MURRAY HORWITZ, American Film Institute: Ooh, what a sound. Actually, two important sounds in American music: the tenor saxophone of John Coltrane and the lush, rich, deep baritone of the singer Johnny Hartman. A.B. Spellman, tell me about that musical partnership between the two of them on this CD, which is called John Coltrane and Johnny Hartman.

A.B. SPELLMAN, National Endowment for the Arts: Yes, John Coltrane and Johnny Hartman had known each other since their days in the Dizzy Gillespie Orchestra. Coltrane was third alto in that band in 1949. Johnny Hartman had been the vocalist, in and out of the band, sharing time with Joe Carroll, mostly.

He — Hartman — was a balladeer who was very much unappreciated in jazz history. There's almost nothing written on him. He's the kind of singer who exemplifies the cool sound that was so typical of bebop musicians... the cool attitude. It's an attitude that is laid somewhat back, and it's not going to get loose too much in the way it presents itself. But then again, as he sings, you can tell he's a man who very much trusts his voice to the degree that he can make the song work without tearing it apart.

John Coltrane, similarly, does that kind of playing on the ballads as well. On this record, there's only one extended John Coltrane solo, on the very last cut, "Autumn Serenade." And otherwise, he is playing the melodies as they are and making those melodies work. He's getting the most out of them with just a very little embellishment and using his very beautiful tone, which is something that enough people don't acknowledge.

HORWITZ: Tell me about that. Talk about that a little bit. You say, "the effect of the sound." I mean there's a big emotional range in all this stuff. What happens to us when we listen to this record?

SPELLMAN: What happens with this record is that we get into songs. It is going back to almost the beginning of American song presentation — the "sell the song" idea — which was required of the first generation of recorded jazz artists. And John Coltrane and Johnny Hartman here have selected all very beautiful songs. They believe in these songs. Now here is Rogers and Hart — who are not a trivial collaboration — on "You Are Too Beautiful." It's a beautiful lyric. And a beautiful melody which John Coltrane and Johnny Hartman expose to you gorgeously.

HORWITZ: Your point about it being a musical partnership is so true. It struck me that voice and saxophone are truly equal in all of this.

SPELLMAN: They are. They are equal partners in this collaboration. If you listen to "Dedicated to You" for example, you'll find that the roles are reversed. Johnny Hartman takes the opening lead, sings the first verses of it, and simply introduces the song — the way that John Coltrane has done on many of the others. Then he steps back and John Coltrane "sings" the song first. Then Hartman comes in with a somewhat more elaborate solo than on most of the other songs on the record.

HORWITZ: The result of this happy collaboration in the spring of 1963 was a recording that's still available and still able to move people very deeply a couple of generations later. The eponymous title of this album is John Coltrane and Johnny Hartman. It's available on the Impulse label. For NPR Jazz, I'm Murray Horwitz.