Accessibility links
John Coltrane: 'Blue Train' Of all of his albums, John Coltrane selected one as his favorite: Blue Train. Released in 1957, the record is frequently cited as one of the most important in the history of jazz. The 1997 reissue has several bonus tracks, as well as video and interview clips. 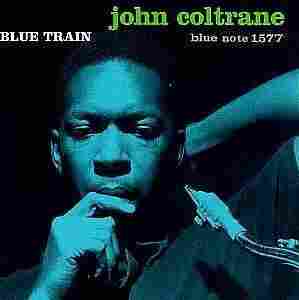 MURRAY HORWITZ, American Film Institute: If the name John Coltrane is mysterious to you or conjures up thoughts of mysterious music, you should get a hold of this for your Basic Jazz Record Library. It's called Blue Train, and it's on the Blue Note label. A.B. Spellman, why should this John Coltrane disc be in our collection?

A.B. SPELLMAN, National Endowment for the Arts: Well, John Coltrane said that this was his favorite record — of his own.

SPELLMAN: He did. It was his first great record as a leader. It is a record which he never surpassed during this particular period. He made others on Prestige — which were all very good, they were all very fine pieces — but this whole band came together in such a tight way for him that it was an excellent sort of underpinning for the solo work that he, Lee Morgan, and to a lesser extent, Curtis Fuller, on trombone did.

HORWITZ: Where does this stand in Coltrane's career?

SPELLMAN: Well, Coltrane had worked with Miles Davis in 1955. After that, in the summer of 1957, he would work with Thelonious Monk at the Five Spot. It was a very great moment in jazz because it was Monk's return after having had an exile, because he didn't have the cabaret card that was required to work in nightclubs. So that was an event in itself.

When John Coltrane joined him on the stand, nobody thought much of it. Coltrane had recorded with Monk briefly, on very halting sort of solos. Ideas that seemed good and got started but didn't go anywhere. I didn't think much of him.

But then, over that summer, in 1957, in just a couple of months, he went from what you would hear if you went back and listened to that Monk's Music record on Riverside, to this open, lyrical, fantastically developed style. All of a sudden John Coltrane had his voice. All of a sudden John Coltrane was able to take one or two ideas during the course of a solo and evolve those — a fantastic musical development. I do compare it to Johann Sebastian Bach, in the way the melodic line just keeps opening and opening and opening.

SPELLMAN: John Coltrane was also a tender balladeer. He was not often thought of that way because he is noted for such loud, strong, cutting edge solos, but he loved to just relax into a ballad and just sing to you. And I think you can hear that on this record in "I'm Old Fashioned."

HORWITZ: John Coltrane, tenor saxophone. One of the most important voices in jazz music. The record is a classic. It's called Blue Train, and it's on the Blue Note label. For NPR Jazz, I'm Murray Horwitz.