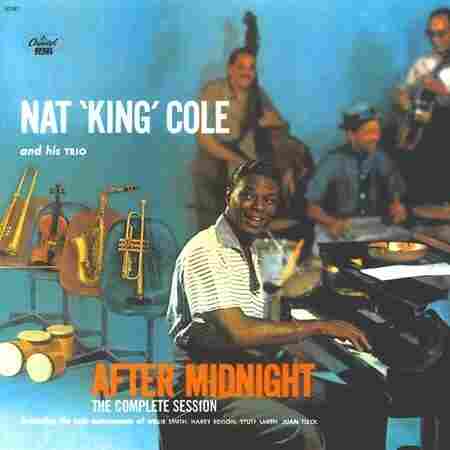 A.B. SPELLMAN, National Endowment for the Arts: So Murray, that's some very tight trio playing by Nat Cole and his friends. That's a great piece of instrumental work by Nat, and he was a great instrumentalist as well as a singer, wasn't he?

MURRAY HORWITZ, American Film Institute: Yeah, and of course he was an instrumentalist before he was a singer, and really one of the greatest jazz pianists of all time. We can now say with some certainty at the remove of fifty or more years.

But you put your finger right on it, A.B. That's three guys playing as one man. Bass, piano, and guitar — the original Nat King Cole Trio. The song is "It's Only a Paper Moon." Johnny Miller is on bass. Oscar Moore is on guitar and the great Nat King Cole is on the piano.

SPELLMAN: How would you characterize Nat's style as a singer? What should listeners pay attention to when they hear him crooning?

HORWITZ: They should listen for a jazz sensibility. Now what I mean is, he's a very rhythmic singer. But he's sneaky about it. You think of Nat Cole, and you think of this velvet smooth sound. Where he places notes, how he phrases, where he starts words, and where he ends them, always have to me a swing pulse — a pulse that sort of challenges the rhythm of the song, or plays against it in some way. And that keeps you on the edge of your seat, even if it's a beautiful ballad.

SPELLMAN: Murray, the trio had a lot of prominence for a long time. And Nat Cole was one of the first African-American jazz musicians to cross over in such a successful way. Why do you think he appealed so well to so many different people?

HORWITZ: I think its for the same reasons that if you want a Basic Jazz Record Library, you want this disc or a disc of Nat Cole Trio sides in your collection. It's instantly accessible music. It's very attractive music. You don't have to know anything about jazz or music to like it.

But if you do know a lot about jazz or about music, it will reward very, very close listening. What's amazing is that this is the first really big, successful jazz trio... if you can say a trio is "big." This was the era of the big bands, of big 17-piece ensembles touring around the country, and in 1940-41, there weren't a lot of jazz trios. Nat Cole really invented this sound.

And then, when he began singing a little bit later on — you're right — he crossed over and became eventually a giant star... really a superstar. About the time of the peak of his superstardom, in the 1950s, he went back into the studio with the basic trio and guest soloists, and he had maybe his greatest album of all time, a thing called After Midnight.

HORWITZ: That's the great jazz trumpeter Harry "Sweets" Edison from Columbus, Ohio, and he was one of the star soloists that Nat Cole brought into the studio on this date. Others were the violinist Stuff Smith, and Willie Smith, the alto saxophonist. Then there's Juan Tizol, the great Duke Ellington trombonist, and...it's a perfect record. There's not a clinker in the bunch, and on the CD reissue of this album, you actually get a couple of bonus tracks that weren't released in the 1950s.