Accessibility links
Benny Carter: 'BBB & Company' Benny Carter made his recording debut in 1927. Six decades later, he was still going strong, having made a mark as an alto saxophonist, bandleader, composer, and arranger. This 1962 album has his most famous song, "When Lights Are Low." 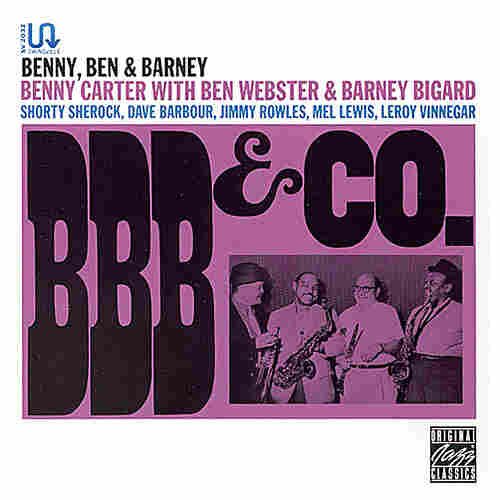 Benny Carter on the Web

A.B. SPELLMAN, National Endowment for the Arts: You know, some artists get the recognition they deserve just by living long enough. One of the longest-lived in jazz is Benny Carter. And, Murray Horwitz, today we're inducting him into the NPR Basic Jazz Record Library.

MURRAY HORWITZ, American Film Institute: Yeah, A.B., I mean, I wonder how we would remember George Burns or Ubie Blake if they hadn't lived to be 100. I'm mean, they're great artists, but they're even more famous because they lived so long. But Benny Carter is in his 90s, and I think he's still underrated.

SPELLMAN: We should say for the record that that beboppy, still swingy, off timey alto saxophone solo was Benny Carter, and he is a composer...

HORWITZ:...and an arranger, and a trumpet player. He's really one of the greats, and he was there at the beginning of jazz. Let's put it this way. He's played and written professionally, in jazz music, for parts of 10 decades.

SPELLMAN: And of all those talents, which are on display on this CD, Murray?

HORWITZ: All of them, not surprisingly. That's one of the reasons I picked it. It's a 1962 session with just four tunes on it, but two of them are Benny Carter originals. Another is a 12-bar blues, and the musicians are terrific. It's called BBB & Company, because it features Benny Carter with tenor saxophonist Ben Webster and clarinetist Barney Bigard. They are two of Duke Ellington's most famous instrumentalists. The trumpeter Shorty Sherock is on the date. The rhythm section includes the great drummer Mel Lewis and Billie Holiday's accompanist Jimmy Rowles at the piano. And these people all swing hard.

HORWITZ: You know, throughout this deceptively simple album, A.B., you hear all that musicality in Benny Carter, plus a big dollop of playfulness. It's a wonderfully enjoyable CD, and it includes his most famous song, "When Lights Are Low."