Accessibility links
The Dave Brubeck Quartet: 'Time Out' President Bill Clinton said one artist inspired him to take up the saxophone: Dave Brubeck. Brubeck had a No. 1 hit with "Take Five," which is heard on Time Out. The album also illustrates the Brubeck Quartet's experimentation with complex poly-rhythms. 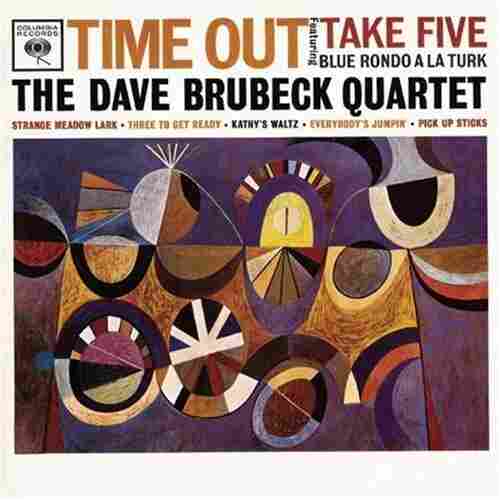 MURRAY HORWITZ, American Film Institute: Well, there you have the saxophone sound that, according to President Clinton, inspired him to take up the saxophone. That's Paul Desmond's alto sax, playing with the Dave Brubeck Quartet on "Take Five," a Paul Desmond composition. It appears on what album, A.B. Spellman?

A.B. SPELLMAN, National Endowment for the Arts: Time Out, on Columbia, by The Dave Brubeck Quartet.

HORWITZ: And why should this be part of our Basic Jazz Record Library?

SPELLMAN: Well, these are some of Brubeck's and Desmond's best compositions.

HORWITZ: That's true, and a lot of these were hit tunes — "Take Five" was on the the Pop charts.

SPELLMAN: "Take Five" was on the top of the Pop charts, it was number one for awhile. That's unusual for serious jazz.

HORWITZ: And it's still really the sound that for a lot of people who aren't really jazz listeners defines what jazz is.

SPELLMAN: Well, there's jazz of a kind. There's jazz that proceeds from Miles Davis "The Birth of Cool" records, which we'll talk about on another day. But it's also music by some very accomplished musicians who are well set in their styles. I have always considered Paul Desmond to be one of the great musicians in jazz for improvising a beautiful melodic line—a long melodic line that is lyrical, and that holds together impeccably.

SPELLMAN: Eugene Wright was a very solid bass player. Bass playing for musicians like this is very difficult, because it's hard in a harmonically complex piece of music to choose the right note out of the chord to keep the thing going forward.

HORWITZ: Why is Joe Morello, the drummer who Dave Brubeck stole from Marian McPartland, the right drummer for this group?

SPELLMAN: Well, Joe Morello is one of the best technical drummers in all of jazz, and for this kind of work here in which the time were so various, it was important to have a musician who could handle it, and make it all seem natural and keep it going together.

HORWITZ: It's true, because he gets a stunning array of timbres, just a different like, orchestral sound out of the drum kit. He has brushes and he has cymbals. He gets different sounds off of one instrument. Let me ask you, how did this come about? I mean, how did they start experimenting with different time signatures?

SPELLMAN: Well, Dave Brubeck had taken the band on a tour of the Middle East and India in the late 1950s, and they were struck by the variety of rhythms that they heard. Jazz as you know, has been wed to dance rhythms for most of its history.

SPELLMAN: American dance rhythms, absolutely, which is basically four-four, and then later, after Max Roach and Clifford Brown, there were some excursions in three-four time, but these guys were wondering...How do we make use of these nines and these...

SPELLMAN: Fives and sevens, that we're hearing in all this modal music of the Middle East and of India. So they thought that they would try to see how they could stitch it all together. Not only that, but they thought that they would see what would happen if they changed rhythms during the course of a tune. So you might go from a nine back to a four.

SPELLMAN: Exactly so. And as I say, you might hear them changing that as they go along. They don't stay in one rhythm on very many of these pieces.

HORWITZ: What's extraordinary is that it was so very experimental and at the same time it was a huge hit.

SPELLMAN: It was a huge hit because it was so accessible. Paul Desmond said that "Take Five" was never meant to be a big hit on the charts, it was meant to be a drum solo for Joe Morello, primarily.

HORWITZ: Well, it shows that things don't always work out the way you want them to.

HORWITZ: Happily, indeed because it's still a very listenable album and one that you should have in your Basic Jazz Record Library. It's called Time Out, The Dave Brubeck Quartet, it's on the Columbia label. For NPR Jazz, I'm Murray Horwitz.