Accessibility links
Art Blakey: 'The Best of Art Blakey and the Jazz Messengers' Art Blakey was one of the greatest jazz drummers of all time. He employed his powerful, rhythmic playing in the "hard bop" — or East Coast — style of jazz. His trademark was the forceful closing of the high-hat on every second and fourth beat. This album illustrates his unique style. 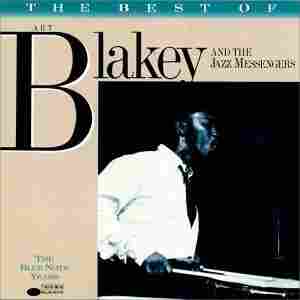 MURRAY HORWITZ, American Film Institute: Well, the word is overused and it's definition has expanded nowadays, but for many of us, that sound defines the word "funky." Tell us, A.B. Spellman, what have we been listening to?

A.B. SPELLMAN, National Endowment for the Arts: That's "Moanin'," a Bobby Timmons composition for Art Blakey and the Jazz Messengers. It is probably the anthem for the style of music known as hard bop.

HORWITZ: So here we get into labels of jazz — tell us what "hard bop" is.

SPELLMAN: Hard bop was also called mainstream jazz or East coast jazz. Hard bop brought back some of the elements of swing, including having a lot of fun with the playing.

Art Blakey is a musician who featured a lot of the younger artists as they were coming up. He caught the talent early. He put it up front, and he gave it a good chance to develop.

HORWITZ: And incredible talent, right? I mean, who were some of the musicians on this CD?

SPELLMAN: On this CD, you will hear Bobby Timmons, the pianist who wrote "Moanin'." You will hear Lee Morgan, who was the standard trumpet player of the period. There's Wayne Shorter as a very young man in his early twenties. There's Freddie Hubbard, another trumpet player who's still making some waves today. There are lots of musicians whom I could go on naming, but it was sort of a rite of passage, an order of faith for young musicians.

HORWITZ: And we should, I guess, state for the record that Art Blakey was a terrific, ebullient drummer. You hear his style throughout all these pieces and it just gives it that groove that we think of when we think of hard bop and funk.

SPELLMAN: Listen to Blakey on this record. Notice his articulation. Notice how he controls the flow of the composition. Notice how he picks up the tempo and lets it lag when it needs to. Notice his crest rolls and the point at which they come in. They just lift the whole band up. He was the master of that, no one was better.

HORWITZ: A.B., you mentioned the fun. These musicians always sound like they're having a good time.

SPELLMAN: These are very secure musicians. They are comfortable in what they can do. They have no doubt that they can stand up and blow forever. They are really proud of their improvisational skills and of their chops on the instrument.

HORWITZ: So you can hear them having fun all through this CD.

SPELLMAN: Yes, and I would especially point to the coda on "Night in Tunisia" as an example of guys just playing.