Accessibility links
Sidney Bechet: 'The Sidney Bechet Story' In the 1920s, Sidney Bechet developed a distinctive, vibrato style on soprano saxophone that won him wide acclaim. His career lagged until 1949, when he went to a jazz festival in Paris and became an overnight sensation. His skilled improvisation is highlighted in this box set, which covers 1923 to 1950. 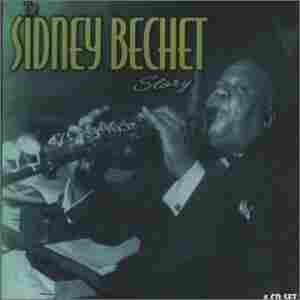 MURRAY HORWITZ, American Film Institute: O.K., listen up. I want you to check out this sound, and once you hear, you'll be able to identify Sidney Bechet in just a very few notes.

HORWITZ: O.K., you got it? Is that fabulous sound drilled into your head? It's from a four-CD set, The Sidney Bechet Story on the Proper Label. A.B. Spellman, that's one of the most distinctive styles in all of jazz.

A.B. SPELLMAN, National Endowment for the Arts: Distinctive and beautiful. Sidney Bechet had a sound that has never been duplicated, Murray. That carefully cultivated wide vibrato, that deep woodsy tone, that soulful phrasing — they all spell Bechet.

HORWITZ: And, he could swing.

SPELLMAN: Like a demon. From the very beginning of his career, Bechet was one of the strong forces in jazz.

SPELLMAN: Here, he is in his mid-20s (in 1923) playing "Wild Man Blues" with the Clarence Williams Blue Five, and shaking up the jazz world.

HORWITZ: Now, a common instrument back then was the clarinet. And he played that, but he's most noted for the soprano saxophone. As a real soloist instrument, that was very unusual. Wasn't it?

SPELLMAN: Yes, it really was Murray. Bechet made his reputation in New Orleans as a clarinet prodigy, but he saw a soprano saxophone in a shop window, while he was on tour in England. And he went in and tried it out. Then he asked them to customize it for him. And soon after he married the horn. He liked the power that he found in it. A power, by the way, that nobody else, not even John Coltrane, has been able to draw from it.

HORWITZ: The set is The Sidney Bechet Story. It's another one of those really great Proper Records sets. It has four CDs that cover Sidney Bechet from 1923 to 1950, and some very good liner notes.

SPELLMAN: And, it's a bargain, Murray... an excellent collection of one of the greatest improvisers in jazz history

HORWITZ: Well, for information about The Sidney Bechet Story and other selections in the NPR Basic Jazz Record Library, visit the NPR web site at (www.npr.org). For NPR Jazz, I'm Murray Horwitz.