Accessibility links
Count Basie: 'The Essential Count Basie, Vol. 1 & Vol. 2' In the late 1930s, big bands frequently vied for the greatest applause in "ballroom competitions." According to commentator A.B. Spellman, "the Basie band was never beaten" in these competitions." This two-volume set showcases Basie at the height of his ballroom success, and features his renowned rhythm section, "the Kansas City Walk." 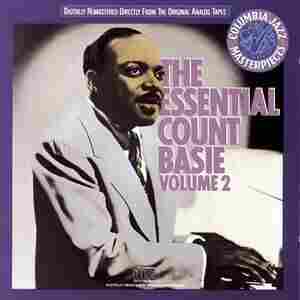 MURRAY HORWITZ, American Film Institute: The best description of that piano I ever heard was from my father, who called Count Basie a "sneaky" piano player. And that's one of the reasons you need this record in your Basic Jazz Record Library. A.B. Spellman, tell us about this CD and some other things we need to know.

A.B. SPELLMAN, National Endowment for the Arts: Well this is The Essential Count Basie. It's a two-CD set on Columbia Jazz Masterpieces. It catches Basie from 1936 to 1940. This is Basie when the band had been sort of added to over the years. He had been sort of adding musicians in to the basic core that he brought out of Kansas City. And that included the mighty rhythm section, this "Kansas City walk," which astounded jazz and dominated jazz for years.

HORWITZ: Because they swung so hard...

SPELLMAN: They swung so hard. Walter Page on bass — "Big Gun" they called him. Count Basie is of course on piano. Joe Jones is on drums. And then Freddie Green, the rhythm guitarist, was added a bit later.

HORWITZ: And indeed you're right — nobody ever swung harder than the Count Basie Orchestra.

SPELLMAN: Nobody did. It's an orchestra that — typical of Kansas City style — featured soloists. It's not one that had an ensemble sound, which had the sort of purity of the Ellington sound. It was one which had people who just blew very well all the time and had a great time doing it.

SPELLMAN: There are many great soloists on this record. You have people of the stature of Sweets Edison, one of the all-time greatest trumpet players. There's Buck Clayton, and a host of other musicians who were in the band.

HORWITZ: Including one of the great tenor saxophonists of all time...

SPELLMAN: Lester Young. Lester Young stands out in this very strong ensemble. You hear him jumping out of the band again. And it is a solo style that was influential in many ways. Billie Holiday, for example, was very much influenced by Lester Young's phrasing — the sort of style that's on the very end of the beat.

HORWITZ: And he had feature numbers for some of these great soloists, right?

SPELLMAN: Yeah. Trombonist Dicky Wells, for example, is featured on one of the very best arrangements on the record, which is "Dicky's Dream."

HORWITZ: These guys sound like they were having a great time.

SPELLMAN: They did have a great time, and the band had to encourage that because it was the core of its aesthetic. It was a battle thing. You see, these bands had to fight. The ballroom scene at that time had "Battle of the Bands," and the bands would come in, they would play opposite of each other, and they would just fight to see who would get the greatest applause. And the Basie band was never beaten, at least not decisively, by anybody and there were some great bands at the time. They also featured some of the better singers of the period: Jimmy Rushing, a Kansas City singer, who is a pre-microphone stylist. He is someone who can fill a hall without standing at a mic.

HORWITZ: So we recommend that you add to your Basic Jazz Record Library The Essential Count Basie, Volumes 1 & 2, a two-CD set on the Columbia Jazz Masterpieces label. For NPR Jazz, I'm Murray Horwitz.