Accessibility links
Louis Armstrong: 'The Complete Hot Five & Hot Seven Recordings' Louis Armstrong, one of the greatest entertainers of the 20th Century, exuded joy and exuberance as a trumpet player and singer. He rose from poverty in New Orleans, before achieving worldwide fame. In this 1928 album, a young Satchmo shows the extraordinary inventiveness that put him on the map. 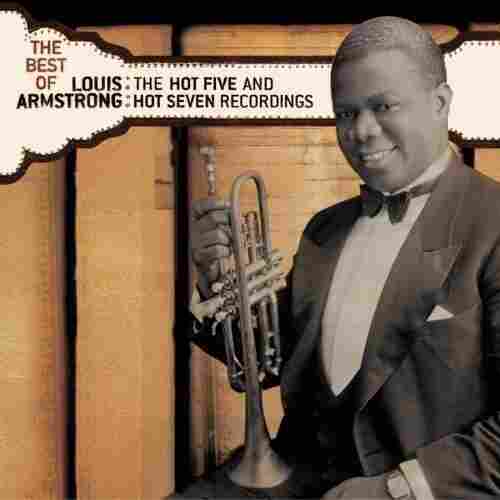 A.B. SPELLMAN, National Endowment for the Arts: Well, that fanfare turned the trumpet around, didn't it Murray?

MURRAY HORWITZ, American Film Institute: It turned almost everything around. I don't think anybody has ever really been able to listen the same since Louis Armstrong played that opening cadenza to "West End Blues" in 1928.

SPELLMAN: That piece is studied by conservatory students in jazz and they find it very hard, even these very classically trained trumpet players.

HORWITZ: Yeah, I tell you what. People who aren't classically trained (are jazzers) find it difficult. It really is maybe the most important fifteen seconds in all of American music.

SPELLMAN: 1928, so we're in Chicago. You're either working for Al Capone or Bugsy Moran.

SPELLMAN: And, uh, let's see, Storyville is closed. Soon, everybody will be in New York.

HORWITZ: Well, except what's really interesting about these recordings A.B., which we think everybody ought to have as part of their Basic Jazz Record Library, Louis Armstrong's Hot Fives and Hot Sevens, is that they were made after Louis Armstrong returned to Chicago. He clearly had some unfinished business. He had played in New York. He had made a big sensation, and played with the Fletcher Henderson Orchestra.

He had not yet become the sensation he was to become in New York City, but Chicago was still, in 1925... 1926... 1927... the center of the jazz universe. And Louis Armstrong comes back from New York and embarks on an extraordinary recording project with a studio band — a band that he never really played with live — The Hot Fives, and then amplified by drums and tuba, The Hot Sevens.

SPELLMAN: When you hear Armstrong in these Hot Five/Hot Sevens recordings, he just jumps out of the band.

HORWITZ: I'm so glad you said that! There are some really important musicians on these recordings: Armstrong's wife, Lil Hardin, is the pianist. Johnny Dodds is the clarinetist. Kid Ory is the trombone player. But they're really not in the same league. I mean, the main event is really Louis Armstrong. And you can hear him "pop" out of the band, as you say. The example I would use is not his trumpet playing, but a scat vocal that he does on a record called "Hotter Than That." You can hear he's just in a different place from the rest of the band.

SPELLMAN: Now along with Armstrong, we have Earl Hines, who is generally accredited with having made the piano a jazz solo instrument. Armstrong does this with his trumpet with a real bravura style, does he not?

HORWITZ: He really does. He created the art of the jazz solo. People had taken solo breaks before, but the idea of an improvised composition that had a beginning, a middle and an end... that took ideas, that played with them, that hung together structurally and told a story. That's something that you can hear Louis Armstrong develop over the four years of these recordings.

HORWITZ: These recordings really are as basic as you can get in the Basic Jazz Record Library. These really are the recordings that put jazz on the map in many ways. They consolidated the musical revolution that was jazz. They allowed it to reach a wider, more diverse audience, and you need to have them as part of your collection.

SPELLMAN: So we've been listening to and talking about Louis Armstrong's The Complete Hot Five and Hot Seven Recordings on Columbia Legacy. For NPR Jazz, I'm A.B. Spellman.