Accessibility links
Mose Allison: 'The Sage of Tippo' Born in Tippo, Mississippi, Mose Allison, known as the "William Faulkner of Jazz," grew up playing a piano in back of a gas station — and never stopped. Allison, a prolific songwriter, pianist and singer, brought his down-home Southern bluesy style to jazz. This album illustrates the versatility of a man said to play "blue-eyed soul." 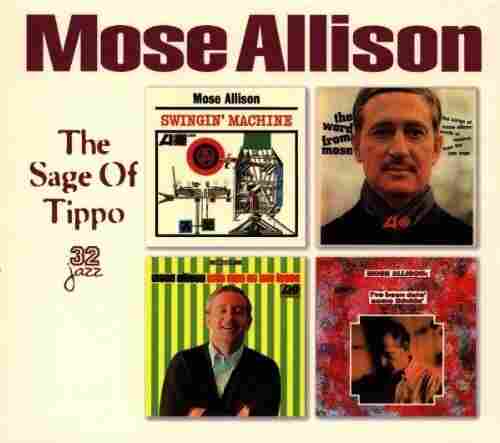 A.B. SPELLMAN, National Endowment for the Arts: I'm A.B. Spellman and on days like this, we induct CDs into the NPR Basic Jazz Record Library. Murray Horwitz, they tell me you can walk among the three places in Mississippi, where Elvis Presley, William Faulkner, and Mose Allison were born.

MURRAY HORWITZ, American Film Institute: Or at least ride a bicycle. Yeah, Tippo, Mississippi in Mose's case. What is it about the Deep South, A.B.?

SPELLMAN: Well, I'm from the South, Murray, and I think it has something to do with dead mules.

HORWITZ: It must be something down there, because Mose Allison is able to get hard, emotional, and intellectual truths into some deceptively simple, bluesy, swinging jazz.

HORWITZ: Can I say the word, A.B., please can I say it? Please? Please?

SPELLMAN: Oh, not the word, Murray.

HORWITZ: Unique. Mose Allison is really unique in all of jazz. Maybe in all of American music. I think that he's still underrated, and one of the greatest of all American artists. He's had a huge influence on the singer/songwriters of rock and roll and the folk tradition.

SPELLMAN: I think he's like a lot of other musicians, who started out in the '50s. He grew up on bebop, and at the same time, he loved that good ol' country blues.

HORWITZ: Yeah, but he's one of the few jazz songwriters, I think, who embraced the blues — lyrically as well as musically. And he uses them to give us a lot of metaphors for modern life.

SPELLMAN: And Mose Allison is a jazz musician. He's got his own piano style and he works with good sidemen.

HORWITZ: Yeah, and this set is a two-CD compilation of his most important work from the '60s, and it's a combination of instrumentals and vocals. And nobody's got a voice like Mose Allison.

SPELLMAN: Well, maybe nobody except you when you imitate him. It's called Mose Allison's The Sage of Tippo. It's a two-CD set on the 32 Jazz label.