Accessibility links
Gene Ammons: 'All-Star Sessions with Sonny Stitt' Gene "Jug" Ammons played bebop and R&B with equal skill. As the founder of the "Chicago School" of tenor sax, he performed with the Woody Herman and Billy Eckstine orchestras. He and his saxophonist friend, Sonny Stitt, often seemed to be in competition when they played together, as they do in this album. 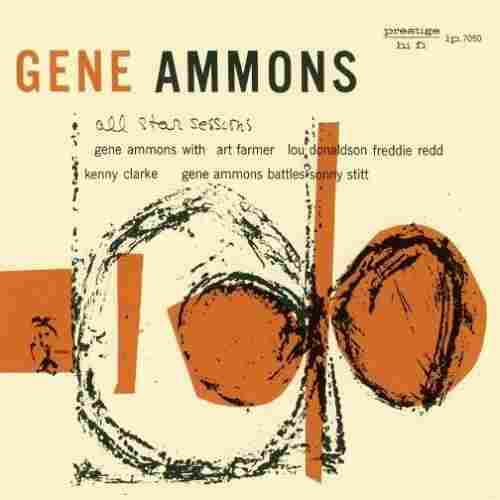 MURRAY HORWITZ, American Film Institute: Yes, it's a fresh wind. What can I tell you. There are no two guys, I think, who ever blew harder than Gene Ammons and Sonny Stitt when they were together on the bandstand.

SPELLMAN: We miss the battles of the horns. Don't we?

HORWITZ: Yeah, I think there are some of the younger musicians now, who are trying to bring the tradition back. One of the things about jazz that really makes it reflective of the American character is the way it accommodates competition and encourages it. I mean, we are a very competitive people, after all, we Americans. At its best, our competition provides progress. It moves it on up, it pushes us to do better and better. And in jazz, this takes the place in these famous cutting contests, these battles, where two musicians will get up, and go head to head and see who could do better.

A.B. SPELLMAN: Now this particular session has much to commend it, does it not?

MURRAY HORWITZ: It does. Ammons and Stitt actually led a band together, so they made this battle part of their ongoing repertoire. And when Gene Ammons was hired by Prestige records to do a session in 1950, he did one that you'll hear, with two extended tunes on it that include the trumpeter Art Farmer, his twin brother, the bassist Addison Farmer, Kenny Clarke on drums, and the alto saxophonist Lou Donaldson. When they added other cuts to make it a 12' LP, they used some of the battles that Sonny Stitt and Gene Ammons had done together in their own group around the same time.

SPELLMAN: Where do you see Ammons and Stitt in the history of jazz?

HORWITZ: I think that Ammons and Stitt could not have happened before bebop in a way. They have really assimilated all the lessons of Charlie Parker. Certainly Sonny Stitt, who also played alto saxophone, was a great Parker disciple, but they do the kind of hard blowing that Lester Young did with the Basie band.

So I see them as two fellows who comprise a lot of the traditions of their instrument that had gone on up to the post-World War II period. And then, they sort of presage the hard boppers who come later with Art Blakey, and some of the things that Miles Davis did, because this is music that you can always tap your foot to and there's a whole lot of blues all the way through it.

SPELLMAN: Is it all blowing or is there some tenderness to it?

HORWITZ: For this CD, there are two beautiful ballads that are appended as bonus tracks.

SPELLMAN: So, all together, Gene Ammons' All-Star Sessions with Sonny Stitt on Prestige is a welcome addition to the NPR Basic Jazz Record Library.

SPELLMAN: You can get information about this and other NPR Basic Jazz Record Library selections at our Web site. For NPRJazz, I'm A.B. Spellman.