Accessibility links
How Author Juliet Eilperin Learned To Understand Sharks, The 'Demon Fish' Author Juliet Eilperin says that while sharks are efficient, relentless killers, humanity's fear of the animals at the top of the ocean's food chain is overblown. "They're incredibly good at what they do," she says, but "they're not targeting us." 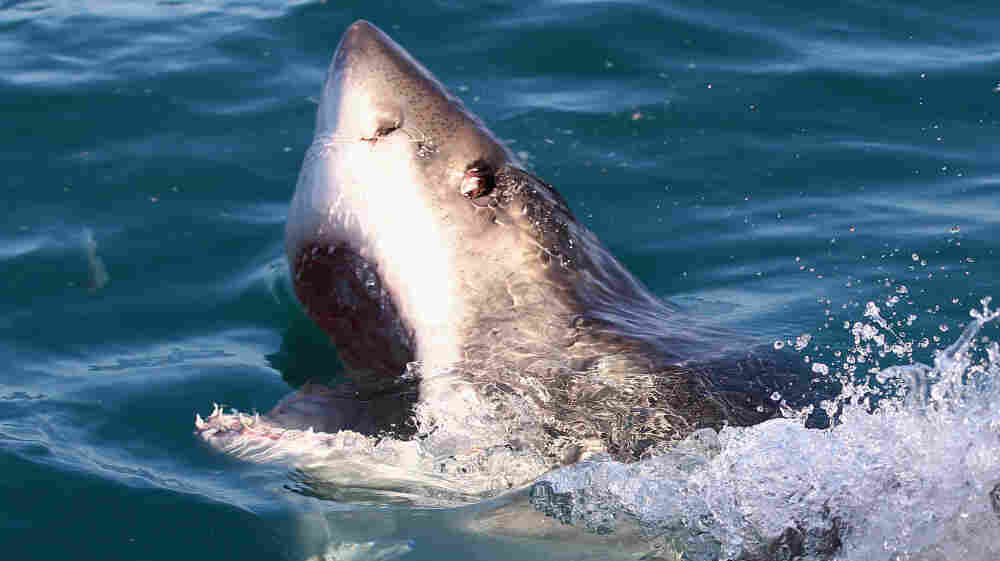 Ever since Jaws, the combination of summertime and sharks has conjured images of killer fish stalking beaches as puffy-legged vacationers frolic in shallow waters, never suspecting that the animal that has been called the "definitive predator" has seen them, smelled them and now craves them.

If you judge Juliet Eilperin's new book — out just in time for beach weather — by its title, you might brace yourself for tales of man-eaters and blood in the water. But the author of Demon Fish: Travels Through the Hidden World of Sharks says that in reality, it's the sharks that should be afraid of human predators.

In the book, Eilperin, the national environmental reporter for The Washington Post, visits communities around the world where people interact with sharks, sometimes with respect, but far more often with fear or aggression. 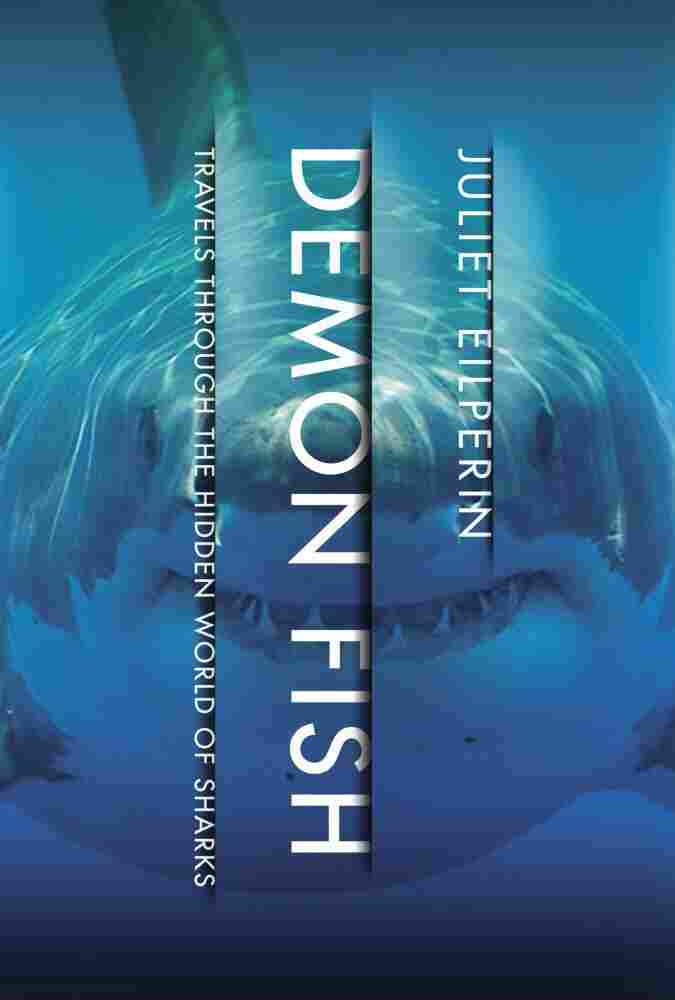 "We're the ones who are dangerous," Eilperin tells Weekend Edition Saturday's Scott Simon. "It's not that sharks are without dangers, but if you want to say who poses the greater threat between the two, there's no doubt it's humans."

"Because we crave sharks both for their fin so that we can put it into an Asian delicacy — that's shark fin soup," Eilperin says. "We catch them by accident, and then some people like to go catch them so they can create fiberglass trophies and tell tales to their friends. And as a result, we're killing somewhere between 80 and 100 million sharks a year, where by comparison, sharks kill between four and five people worldwide."

"We're not fatty enough. We don't have enough on us. So, in fact, often when a great white attacks someone, they do the 'bite and spit.' They do the bite hoping that we're a seal and they spit us out. You know, what you see in the movie, and this total consumption of humans, is not usually what happens," she says. "It's not to minimize it [when it does happen], but if it's any consolation, we now have a 90 percent chance of surviving a shark strike, so that's a lot better odds than it was at the turn of the last century."

So how did sharks win their reputation as the monsters of the sea? Eilperin says the relationship goes back to a time when humans depended on — and traveled in — the sea more than we do now.

"I think we came to see them as evil during seafaring times," Eilperin says. "I mean, I think there's this primordial fear that we have of them because, frankly, particularly with island cultures, they were more closely tied to the sea, they were going out to sea, and many of them were having interactions with sharks."

So sharks have earned at least a bit of their reputation as mysterious and efficient killers.

"I think that they are one of the few creatures that can attack us with no warning," Eilperin says. "To some extent it makes sense. I mean, basically, they are relentless predators. It's why they've been able to survive for hundreds of millions of years. They're incredibly good at what they do; it's just that they're not targeting us. The way that Christopher Neff, a researcher in Australia, puts it is that we're in the way but not on the menu. So I think that's our biggest misconception. But in other ways, sharks can be pretty brutal. Some of them eat each other in utero. They abandon their young. So they're not saints, by any means."

Eilperin says that sharks predate dinosaurs by about 200 million years. And while they display traits that have evolved into characteristics we share, like the muscles that humans use to chew, DNA tests have shown that the animals themselves have barely changed.

"It's one of the reasons why they're pretty ill-equipped to adapt, whether it's intense fishing pressure or ocean acidification," Eilperin says. "There are things happening now that they never had to contend with over the course of hundreds of millions of years."

Of course, humans still present the greatest threat. But Eilperin is convinced that we can co-exist. 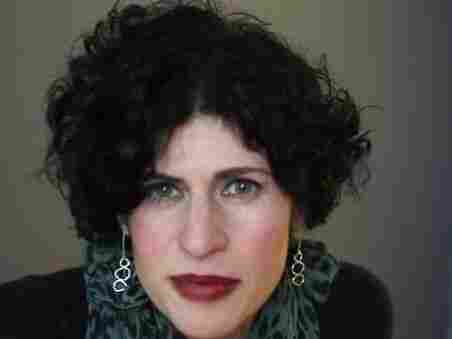 "I think there are many ways we could consider ourselves allies. Basically, sharks are essential for maintaining the balance in the ecosystems," she says. "They're one of the top predators, and they really keep midlevel predators in check so that we can have all sorts of species and healthy coral reefs. And for that reason, it's actually more in our interest to keep them around than to get rid of them."

In the course of writing Demon Fish, as Eilperin got to know sharks quite a bit better, her appreciation for them grew.

"I'm not obsessed with them and I don't — 'love' is not the right word for them — but I have both incredible respect for this animal that's managed to survive for so long and I do have a little bit of affection," she says. "I think that they're beautiful creatures, and that's something I didn't really think before getting in the water with them. But now that I've seen them up close and in lots of different contexts, I just think there's nothing else like them.

Each kind of auctioneer has a style. There's the robust cattle auctioneer, who spits out numbers in a bold, singsong voice that determines where animals go to be bred or slaughtered; the elegant estate auctioneer, whose rich, mellifluous tone entices art and furniture collectors to fork over their savings; and then there's Charlie Lim.

A spectacled, wiry man in his early fifties, Lim sports a short-sleeved, button-down shirt and a modified bowl cut that lets his straight black bangs fall neatly across his forehead. Standing in front of the sort of shiny whiteboards that appear in classrooms and corporate conference rooms across the globe, he doesn't talk much as he auctions off his wares; instead, he shakes an abacus in short, regular bursts. Much of the time, the clicking of the beads is the loudest sound in the room.

Lim is a shark fin trader. More precisely, he's the secretary of Hong Kong's Sharkfin and Marine Products Association. And at the moment he's standing in a nondescript auction house whose spare white decor evokes a Chelsea art gallery. But when the auction begins, the buyers crowd around Lim in a semicircle, jostling for a look at the gray triangular fins splayed across the floor. A shark fin auction is as fast as it is secretive. By the time Lim takes his position at the front of the room, one of his assistants has already marked on the board behind him — in a bright red felt-tipped pin — which sorts of fins are being auctioned in any given lot. As soon as men dump the contents of a burlap bag on the floor, the bidding begins: any interested buyer must approach Lim and punch his suggested price into a single device that only the auctioneer and his assistant can see. The bidders must make a calculated guess about what price will prevail, rather than compete with each other openly for a given bag of fins. Within two minutes the lot is sold, and the winning price per kilo is duly noted on the board. Lim's assistants sweep the pile back into its bag, using a dustpan to gather any errant fins that might have escaped to the side. Another bag — containing the first dorsal, pectorals, and lower lobe of the caudal fins that are most valuable — is dumped on the floor, and the cycle begins again.

The group of men gathered here — and it's all men — are experienced traders who hear about these auctions through word of mouth. There is no downtime, no chitchat; in fact, there aren't even chairs for them to sit on during the auction. Given the quick pace of shark fin sales, they must be prepared to bid without hesitation. The bidders show no emotion during the entire process: this isn't fine art they plan to furnish their homes with, or livestock they will devote months to raising. It is a heap of desiccated objects they will seek to transfer to someone else as soon as they acquire it.

Lim does make a few remarks in Cantonese about the fins before his feet, but it's not the sort of chatter most auctioneers use to boost the price of a given lot. He's not saying, "Take a look at these gray beauties!" or anything to that effect. Sometimes he indicates the species that's collected in a given bag: blacktip, hammerhead, or blue shark. But a shark fin auction is not really about salesmanship. It's about moving product.

Some rare metals and stones have carried a high market price for centuries. Basic foodstuffs, including several fish species, have also held a quantifiable commercial value over time. The shark trade, however, is a more recent arrival to the world scene. Unlike many other fish, such as salmon or red snapper, for example, shark does not derive its value from its taste or nutritional worth. In fact, there's ample evidence that the high levels of toxins sharks accumulate in their bodies pose a potential threat to humans, just as tuna does. While many consumers — especially in China — view shark meat and fins as nutritious, sharks are likely to contain high levels of mercury because they are large, slow- growing fish that consume other fish as their prey, which allows mercury to build up in their muscle tissues. WildAid, an environmental group that crusades against shark fin trafficking, commissioned a study by the Thailand Institute of Scientific and Technological Research in 2001 that found shark fins in Bangkok's markets contain mercury concentrations up to forty-two times above the safe limit for human health.

The market for sharks is based more on the animals' mystique than anything else. In the same way that De Beers has convinced young men across the globe that women will be more likely to accept their marriage proposal if it comes with a diamond ring, men like Lim have managed to persuade Asian consumers that the very presence of stringy shark fin cartilage in their soup speaks to their own social status. Other marketers have different pitches, bottling sharks' mysterious promise in a range of salves. One U.S. entrepreneur has made a decent amount of money peddling the line that sharks cure cancer, while other companies are in the business of advertising shark oil's anti-aging properties. None of these appeals are based on science, but they tap into our long-held beliefs about the power of an animal that can consume us. And nowhere do they resonate more strongly than in Asia, where an ever-expanding group of consumers is seeking new ways to demonstrate its upwardly mobile status.