Accessibility links
At 90 Days, Libya Conflict Has D.C. Divided Congress has not formally authorized military operations in Libya, and the White House contends there's no need to do so. Is Obama in violation of the War Powers Resolution? It may depend on what constitutes being at war. 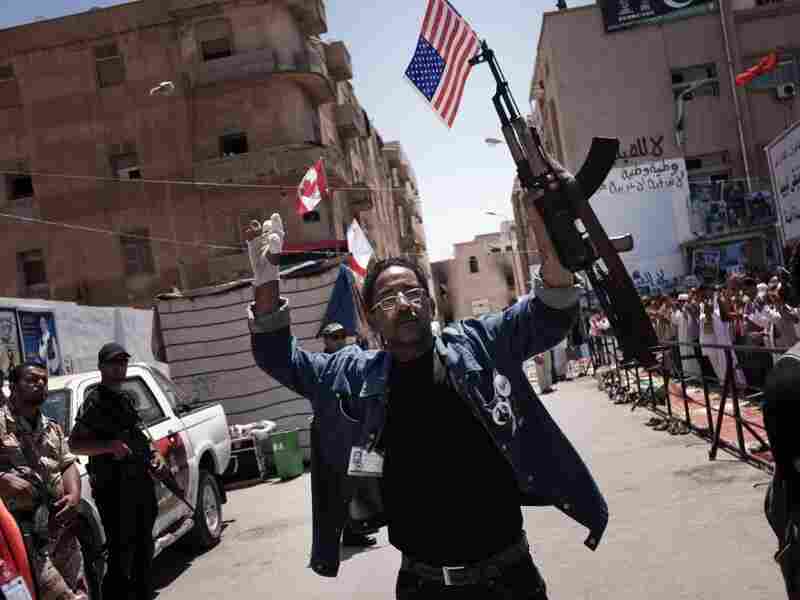 A Libyan raises his AK-47 and an American flag in the rebel-stronghold city of Benghazi. Gianluigi Guercia/AFP/Getty Images hide caption 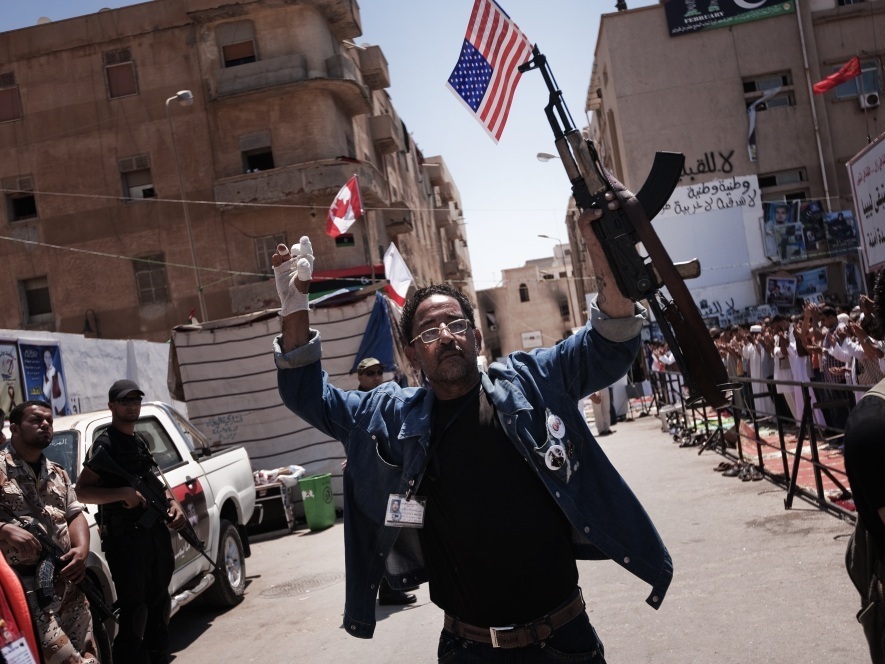 A Libyan raises his AK-47 and an American flag in the rebel-stronghold city of Benghazi.

The debate over what to do about Libya is coming to a head on Capitol Hill.

The U.S. military intervention in Libya reaches its 90th day on Sunday. That number is significant, because according to the 1973 War Powers Resolution, Congress must authorize American engagements in hostilities that surpass 90 days.

Congress has not formally authorized military operations in Libya, and the White House contends there's no need to do so. Obama's position on the War Powers Resolution and Libya was laid out in a 30-page report sent to Congress this week. It's quite simple, as White House spokesman Jay Carney explained on Friday to a roomful of reporters.

"We do not believe, as a legal matter, that our engagement in this mission meets the hostilities threshold set by the War Powers Resolution, and therefore does not apply," he said.

In other words, Obama will not be violating the War Powers Resolution starting Monday because, by his lights, the U.S. is not at war in Libya. Speaker of the House John Boehner isn't buying it.

"We've got drone attacks under way; we're spending $10 million a day; we're part of an effort to drop bombs on Gadhafi's compounds," he says. "It doesn't pass the straight face test, in my view, that we're not in the midst of hostilities."

As soon as next week, Boehner says, the House could exercise its power of the purse to try to put limits on the Libya intervention. Meanwhile, 10 House Democrats and Republicans filed a suit in federal court this week, declaring the president in violation of both the Constitution and the War Powers Resolution.

Siding with Obama in this quarrel, however, are several prominent House Democrats. Minority leader Nancy Pelosi is one of them.

"I'm satisfied that the president has the authority he needs to go ahead, and I say that as one very protective of congressional prerogative," she says.

But while some longtime anti-war House Democrats such as Pelosi are giving a Democratic president a pass on Libya, their once-hawkish GOP counterparts are not.

In the Senate, it gets more complicated. Perhaps Obama's staunchest defender there on Libya is the Republican he beat two and a half years ago, Arizona's John McCain. This week on the Senate floor, McCain took House Republicans to task for prompting a letter of thanks from Libyan leader Moammar Gadhafi after they passed a resolution this month chiding Obama on Libya.

"Republicans need to ask themselves whether they want to be part of a group who are earning the grateful thanks of a murderous tyrant for trying to limit an American president's ability to force that tyrant to leave power," McCain said.

McCain has teamed up with John Kerry, the Democratic chairman of the Foreign Relations Committee, to draft a resolution expressing the Senate's support for the Libyan intervention. Kerry says their motive in doing so is not the War Powers Resolution.

"I don't believe it applies," Kerry says, "but I think it's good for us to be on record as being supportive."

The top Republican on the Foreign Relations Committee disagrees. Indiana's Richard Lugar says starting next week, Obama will indeed be in violation of the War Powers Resolution, and Congress must act.

"If the administration wanted to declare war on Libya, we should ask for a declaration of war and have that debate," Lugar says.

Libya also divides Senate Democrats. Illinois' Dick Durbin, the chamber's No. 2 Democrat and one of Obama's closest allies on Capitol Hill, disagrees with the president's characterization of the U.S. role in Libya.

"We went beyond supplying technology to supplying support for refueling, for intelligence and the like," he says. "America is engaged in this conflict."

"It is war, in the classic sense, in that we are in open hostilities with the forces of Moammar Gadhafi," Durbin says.

So it may all come down to one troubling question: What constitutes being at war?