Accessibility links
Why Seeing (The Unexpected) Is Often Not Believing Two psychologists have been conducting experiments on inattentional blindness — how people fail to see things in front of them when they're focused on something else. They were inspired by a case in which a police officer said he didn't see a crime in progress even though he ran past it. 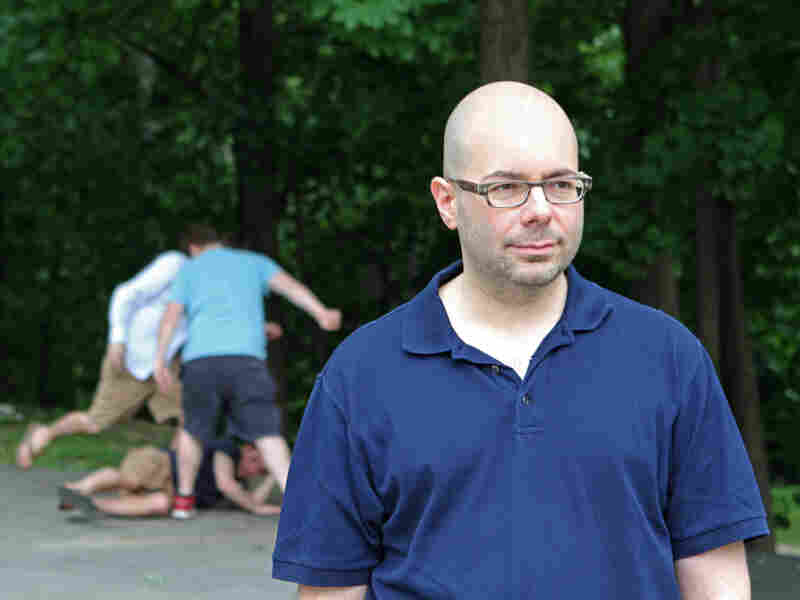 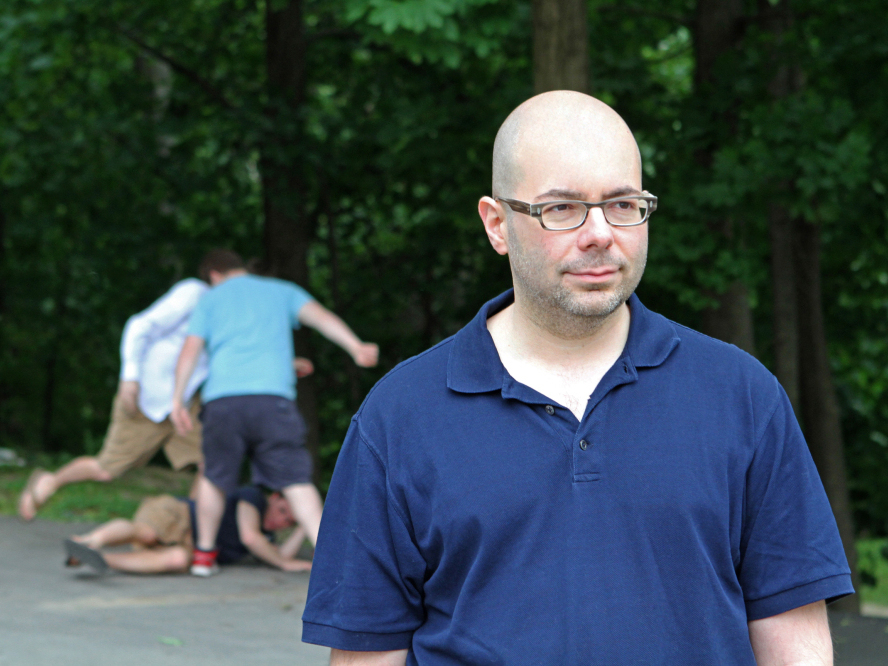 Two months ago, on a wooded path in upstate New York, a psychologist named Chris Chabris strapped a video camera to a 20-year-old man and told him to chase after a jogger making his way down the path.

For close to two years Chabris, who teaches at Union College, had been conducting this same experiment. He did the experiment at night, in the afternoon, with women, with men. All were told to run after the jogger and watch him.

The goal of all this was to answer a question: Is it possible to see something really, really obvious and not perceive it?

But for Chabris and his co-researcher, psychologist Daniel Simons at the University of Illinois, this wasn't just some abstract scientific inquiry. They wanted to know for a reason. Chabris and Simons were trying to understand whether a Boston police officer named Kenneth Conley had been wrongly convicted of lying.

What happened to Conley was the inspiration for their experiment.

The Case That Inspired The Experiment

The case of Kenneth Conley began late one night in January of 1995, after the Boston police department got a radio call that an officer had been shot and four black suspects were fleeing by car. 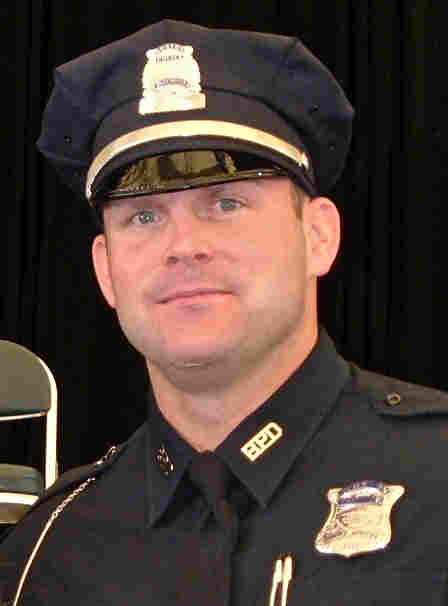 Boston police officer Kenneth Conley was convicted of perjury and obstruction of justice because he claimed not to have seen a brutal police beating as he chased a murder suspect. The conviction was later overturned, but a new study re-examines his claim. Courtesy of Kenny Conley hide caption

Dick Lehr is a former Boston Globe reporter who wrote a book about what happened, and he says that this call triggered a huge response from the department. Reportedly, one of their own officers was down.

"Cops were flying in from all over," Lehr says. "There were more than 20 cruisers involved at different points in the chase."

The police cruisers followed the suspects all over town, until finally the chase came to a screeching halt at the end of a cul-de-sac, and all four suspects jumped from the car to run in different directions.

The first officer out of his car to chase the fleeing suspects was an undercover policeman named Michael Cox. Cox was a black officer who worked in the gang unit, which meant that he was not in uniform, but in plain clothes. And unfortunately, in the dark and the chaos of the night, a group of officers getting out of their cars mistook policeman Cox for one of the fleeing suspects, and went after him.

"Suddenly he's hit in the head from behind," Lehr says. "And they do a Rodney King on him. He's beaten in the head, and beaten on all fours, he's down and the cops are whaling away on him."

Conley is in his car when he spots one of the suspects making a get away and decides to go after him. He leaps from his car and gives chase, and in his pursuit, runs directly in front of the beating of Cox.

There is some controversy about exactly how close Conley came to the beating, but all parties agree that he was fairly close.

"Common sense would say that he had to see something," Lehr says. "Whether it's two feet away or five yards away, [the beating] is in his area, his radar, so to speak."

Shortly after Conley ran by, the police officers beating Cox realized that they had made a terrible mistake, and the beating stopped. But the officers didn't rush in to help their victim.

"Those cops sort of disappeared into the shadows of the night," Lehr says.

Another twist in the case of Kenneth Conley was the testimony of Robert "Smut" Brown. He was one of the murder suspects (though eventually acquitted) that Conley and the other police officers were chasing on the night Michael Cox was beaten, and a key eyewitness for the prosecution in Conley's original perjury trial in 1998. On the witness stand in Conley's trial, Brown recalled running from the police, and looking back to see the beating of Cox. He said he saw a "tall, white cop" standing near the scrum of people. Minutes later, he was arrested by Conley, who also happens to be tall and white.

But the prosecution never actually asked Brown to point out the cop he'd seen near the beating in the courtroom that day. And the prosecution and the defense never clarified that Brown had actually seen two different officers in those moments: one near the beating, and one who arrested him. The first one was never identified, but the second was indeed Conley.

In 2006, while in prison for a drug charge, Brown told Dick Lehr, a former reporter at the Boston Globe, that he had actually tried to tell authorities that the police officer he'd seen by the beating on that frenetic night wasn't Conley. Brown said he told an FBI agent on the day he gave his testimony that he'd seen the other officer in the courthouse hallway. But he said the FBI agent told him he was mistaken. That FBI agent, Kimberly McAllister, told the Globe she did not recall Brown saying that.

By the time Brown's account came to light, Conley's conviction had already been overturned on the basis of other evidence withheld by the prosecution, and the government had decided not to retry him. In 2006, Conley rejoined Boston's police force, where he still works today.

"There were like 20 or 30 police reports written that night," Lehr says. "[And they all said], 'I was over here, I don't know what happened, I didn't see anything, all I know is that we found Mike there.'"

"The official explanation for Mike's extensive injuries which kept him out of work for six months was that he had slipped on ice," Lehr says.

Was Conley Telling The Truth?

In fact, the only person to admit to being near the beating was Conley. He told everyone he was right there. But like the others, he insisted he hadn't seen a thing.

But the investigators didn't believe Conley. They thought he was lying to protect his fellow officers.

Conley was indicted for perjury and obstruction of justice. At trial he was convicted and sentenced to 34 months in prison.

When psychologists Chabris and Simons first heard about Conley, they were intrigued.

They do research on something called inattentional blindness, or how people fail to see things that are directly in front of them when they're focused on something else. And in Conley they felt they had found a compelling example.

They started pointing to Conley's case in lectures, and writing about him in their books. He became their poster child.

But through all this, both say, there was always a little nagging worry. Chabris says most of their research on inattentional blindness is done in a lab, in front of computers. "And I had always worried that the generalization we were trying to make that the Conley case was a real-world example of inattentional blindness might not be true," he says.

And so they decided to re-enact as closely as possible what happened to Conley in 1995.

Obviously, it wasn't possible to recreate all aspects of the case, like the adrenaline rush of running after a murder suspect, or the chaos of so many people moving through the same space. But Chabris and Simons did their best. Their results were published this month in the journal i-Perception.

"The subject in the study was supposed to follow behind the jogger at a fixed distance and count how many times the jogger touched his hat," Simons says.

One of the early tests for inattentional blindness devised by Daniel Simons and Chris Chabris.

The purpose of this was to maintain the focus of their attention, just as Conley was focused on the suspect he was chasing to make sure he didn't pull a gun or throw something away.

Then about a minute in the run, slightly off to the side, Chabris and Simons had three students stage a fight.

"We had two students beating up a third, punching him and kicking him and throwing him to the ground," Chabris says.

The question was whether the students would see the fight, and under the conditions — nighttime — that most closely resembled Conley's experience. The numbers were shockingly low.

"Only about a third of the subjects reported seeing the fight that we had staged," says Chabris.

And broad daylight didn't cure the problem. In the light of day 40 percent still didn't notice the student being beaten.

Unfortunately this work was only published this month, far too late to factor into the Conley case.

Conley was the sole officer convicted after the 1995 beating of Michael Cox. His 34-month sentence for perjury was eventually overturned in 2004 after it became clear that the government had withheld documents helpful to Conley's case. But in the meantime Conley lost his position on the police force. For years he bumped around from job to job.

But both Chabris and Simons are hopeful that this work might influence future cases.

"We hope that maybe this will influence the courts to take notice of the fact that people don't see everything around them — and they intuitively think that they will," says Simons. "And those two things together can lead to a lot of mistakes: potentially convicting people of crimes that they weren't really guilty of."

And the relevance of this work isn't limited to what happens in court rooms.

Chabris points out that our inability to absorb visual information coupled with our mistaken belief that we actually are able to absorb a lot of it influences all kinds of behavior.

"This underlies problems with using cell phones while driving and all kinds of situations like that," Chabris says.

Seeing is believing the old adage goes. But do we always see, when we look?