Accessibility links
Stephen Sondheim's 'Company': Can Theater-To-Film Take Off? This weekend, movie theaters played a filmed version of a star-studded production of Stephen Sondheim's Company that played live in New York in April. An experiment in filmed versions of live performances (though certainly not entirely new), it raises the question of what the future could hold. 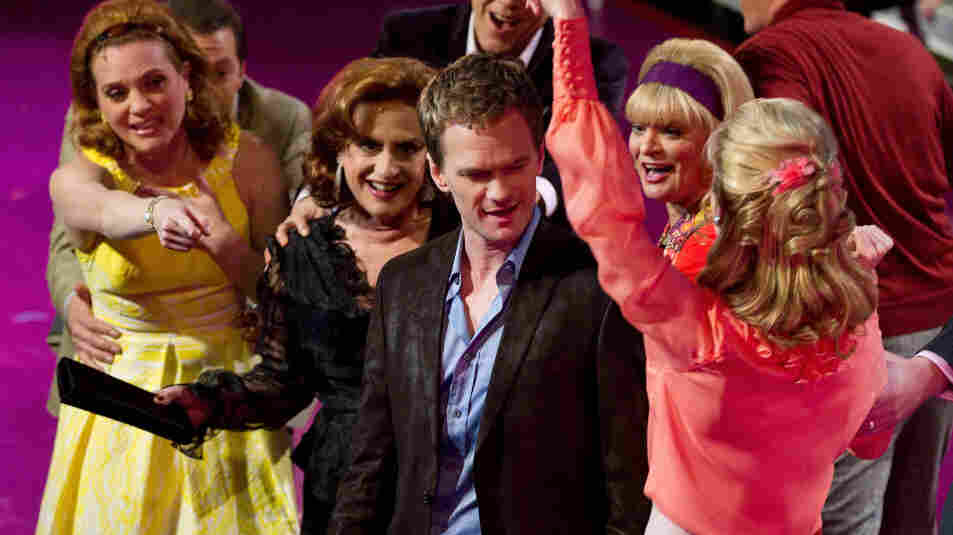 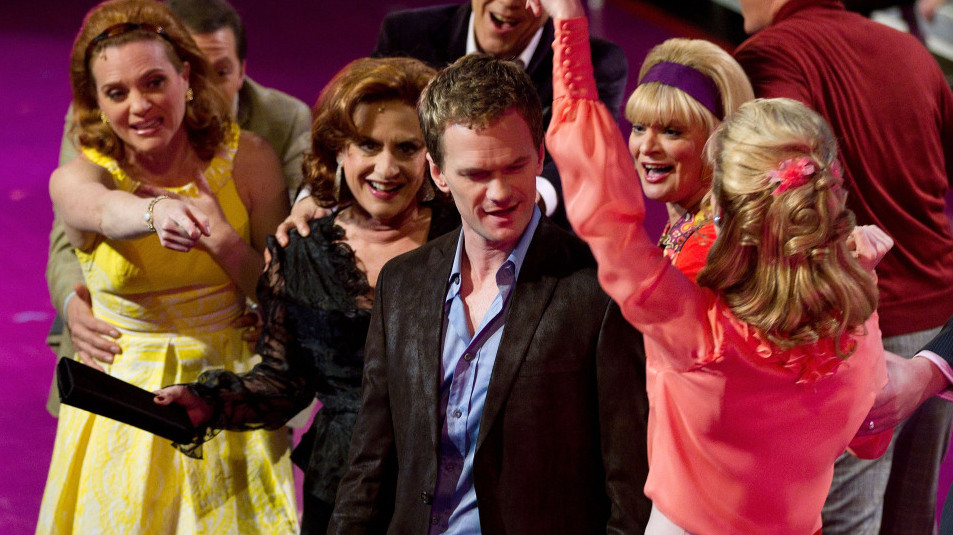 Neil Patrick Harris stands among the cast of Company, which played in select movie theaters this weekend.

This was the weekend that the production of Stephen Sondheim's Company filmed during a brief run with the New York Philharmonic in April enjoyed a limited run in movie theaters across the country. (If you missed it, there are rumblings of a one-shot encore date in July, but they're not yet listed on the official site, so stay tuned.)

While the poster for the show includes some TV stars who lack musical theater backgrounds, including Stephen Colbert, Jon Cryer and Christina Hendricks, the backbone of the production is a core of people with extensive Broadway experience: Neil Patrick Harris, who made a career for himself on Broadway between the time television turned him out and the time it took him back; Martha Plimpton, who's an experienced singer as well as a two-time Tony Award nominee; Patti LuPone, who ... is Patti LuPone, for crying out loud; Katie Finneran, who starred on TV's Wonderfalls but is familiar to theater people for roles like Sally Bowles in Cabaret; Craig Bierko, who's done a mountain of television but also The Music Man and Guys And Dolls ... in other words, a few of the names are TV people doing Broadway, but more of them are Broadway people who have done television. (Or, in the case of Anika Noni Rose, who's responsible for pulling off the very big number "Another Hundred People," Broadway people who have done movies.)

There's no question that this Company was, in part, an experiment in accessibility designed to continue the ongoing exploration of the potential for live theater to make money by filming performances for display in movie theaters. This isn't a new idea — it's been done with concerts, and the Metropolitan Opera, for instance, does it all the time — and they often do it live (which Company, of course, wasn't). But this is probably the most heavily publicized version I can remember, and one where they've made a real effort to bring in people who will be familiar and will draw crowds, perhaps even including folks who aren't traditionally theatergoers.

I had the interesting experience this weekend of seeing the Kennedy Center production of Sondheim's Follies on Friday night (starring Bernadette Peters and Jan Maxwell), then the filmed Company on Saturday. They're from a similar period in Sondheim's career, and they share the basic tone of most of his work, which I would describe as "Living is really kind of terrible; but you have to do it anyway." (I will share for another time my theory that Company and Into The Woods are largely the same show. The fallibility of fairy tales, you see.)

In conclusion: A movie is not the same thing as live theater. I would rather have seen Company live — provided I was in New York and I could get a ticket and the sound was good and my seat was good and it wasn't incredibly expensive. In other words, in a perfect universe, I'd have seen Company as live theater, but it was live theater in April, and for all those reasons, I didn't see it. And neither did all but a relative handful of other people. We do not live in a perfect universe. (And, coincidentally, as mentioned above, Stephen Sondheim is kind of the composer most likely to make that point himself.)

And while I went in thinking it would be sort of a novelty — Stephen Colbert sings and dances! Support theater! — it wound up being quite an affecting show all on its own. The editing featured too many cuts for my tastes, and some of them felt a little too pointed, as if I was being instructed to look at this person right at this moment to notice this reaction.

Overall, though, was it worth the premium ticket ($18 at my theater)? Of course it was. Neil Patrick Harris was great, Christina Hendricks was a revelation doing pure light comedy, and Patti LuPone was Patti LuPone. For crying out loud. Plimpton was great, Finneran was really great, Colbert and Cryer were perfectly fine, it's spectacular music, the philharmonic killed it, and the whole thing built appropriately to an emotionally raw ending that's notoriously a little hard to parse, but effective nevertheless.

Was it as good as seeing Follies? Well, it wasn't as special. Live theater is incredibly specific; it is something you are sharing with only the people in that one room. In seeing a particular performance, you are seeing something that nobody has ever seen before, that is completely new.

But given how hard and how expensive it is to get yourself to a Broadway show — particularly if you don't live in New York to begin with — seeing a really good staged production that's been competently filmed (again, I could have used a little less cutting, but other than that) is certainly a way for more people to see great shows. Part of seeing Company as live theater is the live theater experience, but part of it is the performances, the songs, the story, and other things that it's always been possible to enjoy in a recorded format — if it weren't, there wouldn't be cast albums, let alone PBS Great Performances showings.

Would this have worked with a regular Broadway show (pretending, as we briefly will, that you got around rights and clearances and you found the right timing and cleared the other hurdles)? Would it have worked to pick a weekend and get theaters to show Daniel Radcliffe in How To Succeed In Business Without Really Trying, or Sutton Foster in Anything Goes? Would it work with The Book Of Mormon maybe three months after it won all those Tonys? (By the way, theater experts: Yes, again, there are a million things about the way shows are currently structured that wouldn't allow this to happen. We're speaking conceptually, projecting into a future that is structured differently.) Maybe.

There's been a bit of grousing about the impurity of the production — The New York Times pooh-poohed Colbert as someone who never should have been cast to sing Sondheim, apparently not knowing that the composer recruited the guy personally — but my guess is that more people saw Company this weekend than have experienced a Sondheim musical in a single weekend in ... a very long time. And while I'd love to have brought them all to Follies, I couldn't. So I'm glad they got to see Company.