Accessibility links
Ben Webster: 'Ben Webster and Associates' Born in 1909, Ben Webster is considered one of the most important swing tenors in jazz. He also was a master of ballads, as exemplified on 1959's Ben Webster & Associates. The album features trumpeter Roy Eldridge and tenor saxophonist Coleman Hawkins. 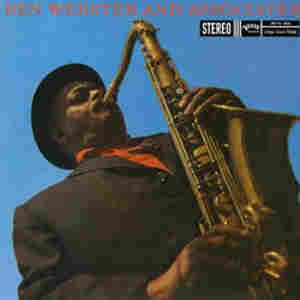 MURRAY HORWTIZ, American Film Institute: Well there is what Dr. Billy Taylor calls "the great man theory of jazz history" and it does have its limitations, but certainly any Basic Jazz Record Library would have to have the sound of that tenor saxophonist in it. It belonged to Ben Webster. A.B. Spellman, tell us about this CD.

A.B. SPELLMAN, National Endowment for the Arts: This is Ben Webster and Associates, and it's on Verve, and it includes Ben Webster playing with Roy Eldridge on trumpet, and Coleman Hawkins on tenor saxophone. Budd Johnson is also on tenor saxophone, and there is a great rhythm section which comprises Jimmy Jones on piano, Les Spann on guitar, Ray Brown on bass, and Jo Jones on drums. It's almost like a jam session, and that's one thing that I like about the quality of this.

HORWITZ: Well they play a jam tune, here. They play "In A Mellow Tone" by Duke Ellington, which is — I always thought it is a tune that you could either play very, very well or very, very badly. You can sort of just mess around on it.

SPELLMAN: "In A Mellow Tone" is the longest selection on the CD. It goes on for twenty-something minutes. First, they allow the rhythm section to get their solos in, then each musician, particularly Ben Webster, who plays the longest, gets their statement in. And it is lovely, lovely, saxophone playing.

HORWITZ: When was this recorded? From what year is this from?

SPELLMAN: This was recorded in 1959. It was recorded a month after Lester Young had died. And some of it almost seem like a tribute to Lester.

HORWITZ: And it's, therefore, mid-career in Ben Webster's musical output.

SPELLMAN: Absolutely. He played well for many years afterwards, but this catches him pretty much at the top of his game, when he is a mature artist, and in a very reflective kind of mood.

HORWITZ: When you think of masters of the jazz ballad, Ben Webster is one of the first names to come to mind. What are some of the classic ballads that he plays on this CD?

SPELLMAN: I would recommend to people, in particular, to listen to "Time After Time." It is such a tender interpretation that will just break your heart.