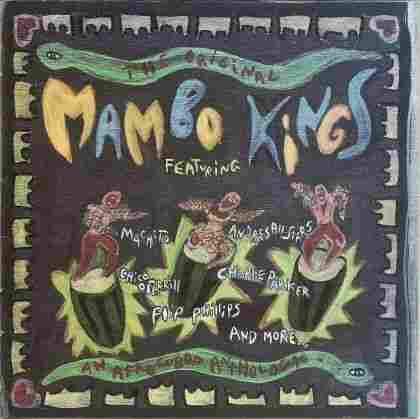 A.B. SPELLMAN, National Endowment for the Arts: A lot of people say bebop wasn't for dancing, but that music makes it clear that some bebop was for dancing. I'm A.B. Spellman, and, Murray Horwitz, tell us what that music is and why it's going into the NPR Basic Jazz Record Library.

MURRAY HORWITZ, American Film Institute: Because A.B., you can't sit still to it, that's why! This is a CD called The Original Mambo Kings: An Introduction to Afro-Cubop, 1948-1954, and it is just that.

SPELLMAN: I know that's one of the greatest: Charlie Parker.

HORWITZ: You got it! Machito, Maurio Bauza, Jose Mangual, Ubaldo Nieto, Bebo Valdés, who is the father of Chucho Valdés, the pianist. And there is Chico O'Farrill, so I guess he's a little bit of both. But the mix of musicians gives a whole range of textures to this music.

SPELLMAN: You can tell the musicians are excited by this music, and you can only imagine what it must have sounded like to hear it in a ballroom.

HORWITZ: Right — although some of this was concert music. There's Chico O'Farrill's famous "Afro-Cuban Jazz Suite." It's everything an extended jazz composition should be and it's got Charlie Parker and Mario Bauza and Machito and Buddy Rich. It's wonderful.

SPELLMAN: Basic jazz indeed. Basic Afro-Cubop for your Basic Jazz Record Library. The CD is called The Original Mambo Kings and it's on the Verve label. You'll find it, along with our other selections on the Web. For NPR Jazz, I'm A.B. Spellman.