Accessibility links
Billy Taylor: 'Solo' Dr. Billy Taylor is perhaps best known as one of the founders of public radio. He also is a pianist and composer who has produced more than fifteen albums. Solo was his first solo piano recording. Album highlights include "All Bit of Bedlam" and "All the Things You Are." 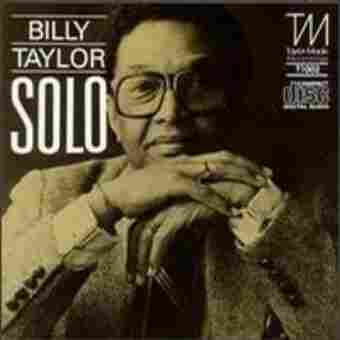 Billy Taylor on the Web

A.B. SPELLMAN, National Endowment for the Arts: The sound of that piano raises certain issues, believe it or not. I'm A.B. Spellman and Murray Horwitz, I think you'd better clear up a few things if we're going to add Dr. Billy Taylor into the NPR Basic Jazz Record Library.

SPELLMAN: Well, we may have some ethical concerns?

HORWITZ: Oh, I got you. Alright. Full disclosure. This is an NPR station and Dr. Billy Taylor is one of the founders of NPR, of public radio, actually. Every time you introduce Dr. Taylor, you've got to say, "He's so many things — pianist, composer, educator, arts activist, radio and TV personality."

SPELLMAN: Yeah, but you know, I think that's what recommends this CD. All of those things are kind of stripped away, and you can really see into his musical soul.

HORWITZ: Well, you know, Billy Taylor, the composer is much in evidence on this CD, which is simply titled Solo. But, you're right. It's just a man playing the piano.

SPELLMAN: And, you don't really think about Billy Taylor as a solo pianist.

HORWITZ: Right. You almost always think of him as the leader of a trio, but I love the playing on this album. He plays for almost an hour and a quarter solid, and it's all him— no bass solos, no drum breaks, no place to run, no place to hide. And the depth of his imagination is astonishing, even when he repeats a device like those "lighting-fast right-hand" runs he does. He doesn't repeat an idea. He uses it to find new values in the tune.

SPELLMAN: Well, I hate to agree with you Murray, but I have to say that you're right about this one.

HORWITZ: Thank you so very much.

SPELLMAN: The CD really does give you a good idea of Billy Taylor, the composer. All together, a very satisfying jazz piano recital. The CD is called Solo, and it's on Dr. Billy Taylor's own label, Taylor Made Recordings. For more selections in our NPR Basic Jazz Record Library, and for a great deal more on Billy Taylor and his music, please visit our Web site.