Accessibility links
Sonny Rollins: 'Saxophone Colossus' A jazz prodigy before he turned 20, Sonny Rollins ranks with John Coltrane and Coleman Hawkins as one of the great tenor saxophonists. In what is often termed his breakthrough album, 1956's Saxophone Colossus contains diverse musical elements, including a calypso, ballad, and Kurt Weill classic. 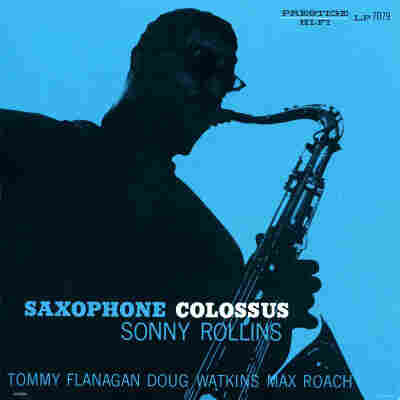 Sonny Rollins on the Web

MURRAY HORWITZ, American Film Institute: Sonny Rollins was a jazz prodigy who had recorded with Bud Powell and Art Blakey before he was even 20 years old. But in 1956, in his mid-20s, he recorded this album, Saxophone Colossus. And a lot of critics have called this his breakthrough record. A.B. Spellman, are they right?

A.B. SPELLMAN, National Endowment for the Arts: Oh, I definitely think this is the record in which Sonny Rollins came out as a master. It is in perfect balance with a calypso, ballad, straight-ahead hard bop number, Kurt Weill classic, and a blues. Here's "St. Thomas," the calypso in which Sonny Rollins declared his West Indian roots.

SPELLMAN: Rollins is joined here with three men you call "musicians' musicians." The subtle and sensitive master Tommy Flanagan is the pianist; Doug Watkins is the bassist; and the sublime Max Roach is the drummer. Together they made a masterpiece in which the melodic exploration is equal to the harmonic analysis that was typical of hard bop.

Rollins' tone had matured and become more rounded, and at times, he seems to stimulate the great Max Roach rhythmically as much as he is stimulated by him. And his always formidable musical intelligence is constantly evident.

HORWITZ: You know, I've always thought that if there's one masterpiece in this overall masterpiece, it's the one that Sonny Rollins made up in the studio: "Blue 7."

SPELLMAN: Well, I got your back on that one, Murray. "Blue 7" is important for more than one reason. The long-playing format that took over in the '50s permitted extended development, and "Blue 7" was one of the first truly great long explorations by a small group. It is truly a masterpiece of improvised composition.

HORWITZ: The CD is Saxophone Colossus by Sonny Rollins. It's on the Prestige label. For NPR Jazz, I'm Murray Horwitz.