Accessibility links
Max Roach: 'Clifford Brown and Max Roach' Max Roach was one of the founders of the jazz "be-bop" style. He also revolutionized jazz drumming by shifting the focus of the beat from the bass drum to the ride cymbal. In 1954, he formed a quintet in Los Angeles with trumpeter Clifford Brown, resulting in several classic recordings. 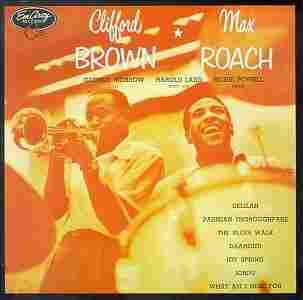 MURRAY HORWITZ, American Film Institute: If that sounds to you anything like a thoroughfare in Paris, it's because that's a tune called "Parisian Thoroughfare." And you heard a little bit of George Gershwin's "An American in Paris" in there. A.B. Spellman, tell me about it.

A.B. SPELLMAN, National Endowment for the Arts: "Parisian Thoroughfare" was written by the great pianist Bud Powell, who is the older brother of the pianist on this date, Richie Powell. Richie Powell was a very talented young man who happened to die along with the great Clifford Brown in a tragic accident in June 1956.

Now, Clifford Brown is one of the very great jazz trumpeters, though he only had about three years of notoriety. And in those three years, fortunately, he did a lot of recording, so we've got a good sampling of him. It's idle to speculate on what he might have done, but what he did do changed trumpet playing drastically in his time.

HORWITZ: You know, in a truly astonishing scene in the Tony Award-winning play by Warren Light (called Side Men), there's a group of musicians on stage listening to a Clifford Brown solo and just shaking their heads and wondering, "What it is about his sound, what did he do?"

SPELLMAN: Well, first of all Clifford Brown was an immensely musical trumpet player. He get's the bravura quality of the instrument, but he never compromises the musical quality of the solos. There is a great deal of melody in his improvisations. No matter how fast he's going, you can always hear him making up melodies as he goes along, and I think that's to a very great degree lost.

SPELLMAN: This particular solo is one that jazz trumpet players go to school on.

HORWITZ: Hmm. So they try to learn to play it note by note.

SPELLMAN: Well, I don't know if they do it note by note. They just break it down, tear it to pieces, and listen to see how he does it. There are times when he's playing threes against fours. That is to say, he plays sort of a waltz time against a march time. And it's very very effective and complicated music, but it comes across as if there's no effort to it at all.

SPELLMAN: Max also has the same kind of musical quality to his playing. He's almost a melodist. If you could play melodies on the drums, Max would do that.

HORWITZ: One of my favorite melodies in all of jazz is a Clifford Brown melody, "Joy Spring," which is on this record.

SPELLMAN: Yeah, "Joy Spring" was written by Clifford Brown for his wife, Larue Anderson. There's a nice story about that that I'm going to squeeze in here. Larue Anderson was a classical music student who was writing her thesis, "Classics versus Jazz," in which she wanted to prove that jazz was inferior. Max Roach introduced her to Clifford Brown, who took her aside and said, "Honey, the whole world is not built around tonic/dominant." And he convinced her otherwise. And then she became, of course, a jazz devotee.

SPELLMAN: And Mrs. Clifford Brown. So he called her his "Joy Spring." And that's where this comes from.

HORWITZ: Now the record we're talking about is called Clifford Brown and Max Roach. It was originally released as an LP in 1954 and you can get the CD on the Verve label. And if you're a bargain hunter, there's a CD called Compact Jazz: Clifford Brown, which is part of the Verve Compact Jazz series. It has most of the tunes from the other CD as well as Clifford Brown's famous arrangement of Cole Porter's "I Get a Kick Out of You." For NPR Jazz, I'm Murray Horwitz.