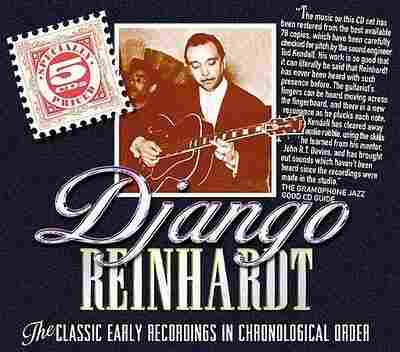 MURRAY HORWITZ, American Film Institute: Well, at the moment that record was being made, the Nazis were ascendant in Germany. The spectre of war loomed over Europe and somehow they found that rhythm. A.B. Spellman, tell us about that music.

A.B. SPELLMAN, National Endowment for the Arts: This is guitarist Django Reinhardt. Entirely self-taught, he was burned in a fire at the age of eighteen in his caravan, and he lost the use of two of the fingers on his left hand, and yet worked his way through that disability, and found harmonies that no one had ever played before. And these harmonies became very influential in the development of the guitar.

HORWITZ: Tell me about that instrumentation. It's an extraordinary group.

SPELLMAN: It is. You have three guitars. One of which belonged to Django's brother. You have Stephane Grappelli on violin. He brought a hard swing, Grappelli. He was sort of the counter of Reinhardt, who was mercurial, unpredictable, untrained, and unlettered. And you have a bass. There are no drums, and there is no piano.

HORWITZ: And no horn.

SPELLMAN: And no horn.

SPELLMAN: Well, he was a great improviser. Typical of the swing era, you have a lot of theme and embellishment playing. But there are little passages that are almost thrown away. You listen to them, and go, "Wow, what was that?" And, their music is just full of these little gems, just flying by.

HORWITZ:...these gorgeous snatches of melodies that he played.

SPELLMAN: Yes he is, because he brings so much of his gypsy heritage into jazz. So that we are bending the notes — it's quite consistent gypsy flamenco guitaring. Django has a way of playing that can sometimes be almost painful to listen to, because the emotions are so raw. This is an unusual quality to have in a musician who played as many little clusters of notes as Django did, because it kind of reaches out and it grabs you into these elaborate sort of phrases that he always throws around.