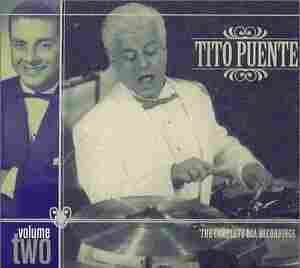 Tito Puente on the Web

MURRAY HORWITZ, American Film Institute: Hi, I'm Murray Horwitz, and that is the music of the young Tito Puente, a percussionist who swung hard from his birth to his death. It's from a set called Tito Puente, The Complete RCA Recordings, two volumes of eleven CDs that's this week's entry into the NPR Basic Jazz Record Library. A.B. Spellman, who could possibly not want this set of Tito Puente?

A.B. SPELLMAN, National Endowment for the Arts: Well, maybe Murray, dead people and Osama bin Laden might not want it. And, I'm not so sure about the dead people. It would do them a lot of good. Tito Puente was a percussionist who is said to have come out of his diapers swinging. He was an immensely popular and prolific musician who was capable of both great fun and great profundity. A gifted and versatile composer and arranger.

HORWITZ: You know, somebody said that Tito Puente had a conception of the whole orchestra as a percussion instrument, and that he composed from his feet up. But, that was some good, tight, section writing.

SPELLMAN: It was, Murray, and it's just one point on this set where you hear the influence of the great Chico O'Farrill on Tito's writing. Still, the Latin musician Jerry Gonzalez is quoted in the notes as saying that "while Machito's band was like Ellington's, Tito Puente's was more a riff band like Basie's." And, that's true mostly. Tito liked to make people dance.

HORWITZ: You know, some of the greatest Latin jazz musicians are included in this set. There are names here like Johnny Pacheco, Vincentico Valdes, Ray Barretto, Candido, and Mongo Santamaria.

SPELLMAN: Especially, the major percussionists came to work with the great timbalero and vibist. Even though Puente was not a Cuban, he had been initiated into the Santeria religion, as had many of the major Cuban percussionists. Here, in "Hot Timbales," Tito leads some powerful Santeria-inspired polyrhythmic jamming.

SPELLMAN: It's a massively swinging addition to the NPR Basic Jazz Record Library. For information about this and other selections, swing on by our Web site.

HORWITZ: The Basic Jazz Record Library is funded by the Wallace Reader's Digest Funds, and by our member stations. For NPR Jazz, I'm Murray Horwitz.