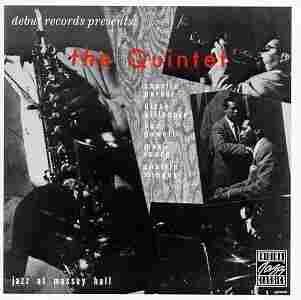 A.B. SPELLMAN, National Endowment for the Arts: Absolutely it must be a part of everybody's library because not only is it Charlie Parker and Dizzy Gillespie, but it's also Bud Powell, Max Roach and Charlie Mingus. Mingus and Max Roach incidentally recorded this concert, which may account for some of the sound problems in it, but nonetheless it is a fabulous, fabulous set.

HORWITZ: And if we had to describe this music, we would have to use that term that's often hard to define, "bebop." This is vintage bebop jazz.

SPELLMAN: Yes, it's mature bebop. These are men who have made their sound ten, fifteen years earlier. They have been in it for that long. Their careers are well-established. Their reputations are well-established. And they are now relaxed and blowing in a, more or less of a jam session. I do not believe that any of this was rehearsed.

HORWITZ: And the "now" to which you refer is actually an evening in Toronto, Ontario, at Massey hall in 1953. On my copy — when I had this LP as a college student — says "The greatest jazz concert ever."

SPELLMAN: Well, I don't know what the greatest jazz concert ever might be, but this is certainly a jazz concert which was historic. These musicians had not played together, the five of them, in some time. In fact I don't believe the five of them had ever recorded together. This brought them all, the giants of bebop, together in a concert that The New Jazz Society of Toronto sponsored.

HORWITZ: You know, melody is a big part of this. A lot of times people unfamiliar with jazz will say "What are all those notes they're playing, what are they doing?" And, in the case of these men, they are all, including drummer Max Roach when he is soloing, they're making up melodies. They're playing tunes and they're making them up as they go along, and there are some wonderful, beautiful modern melodies in what they're playing on this record.

SPELLMAN: Yeah, their improvisation was, even though it was chordal. But their method was to make melodies out of melodies. On "This Hot House," Dizzy Gillespie will make a quotation and then he will build a melody out of that quotation, a whole new melody from it, and that's fundamental to this group. Now even though the swing musicians thought they were unmelodic, when you got more familiar with the music, you could hear how very melodic they all were.

HORWITZ: Well, if you want to make sure that you will always have in your jazz record library the opportunity to be in Massey Hall in Toronto in 1953, you'll need this CD. It's called The Quintet, Jazz at Massey Hall. It's on the Original Jazz Classics label from Debut Records, distributed by Fantasy. For us, it's a part of the Basic Jazz Record Library. For NPR Jazz, I'm Murray Horwitz.