Accessibility links
Lee Morgan: 'The Sidewinder' Lee Morgan may have single-handedly saved Blue Note Records from bankruptcy. In 1963, he recorded The Sidewinder for the struggling label, producing a lucrative pop chart hit with the funky title track. By the 1970s, the album was a jazz phenomenon. 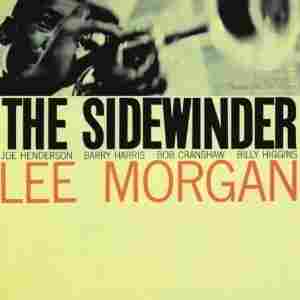 The cover of The Sidewinder hide caption

A.B. SPELLMAN, National Endowment for the Arts: Murray, I'd buy that record, and in fact, I did — a couple of times! And I wasn't by myself either. It's a tune called "The Sidewinder" from a CD by the same name, and it's by the trumpeter Lee Morgan with friends. It was actually a hit on the pop charts back in 1964, if you can believe that. But Murray, I don't suppose that why it's in the NPR Basic Jazz Record Library.

HORWITZ, American Film Institute: Well, A.B., it's great that "The Sidewinder" was a hit, and it's not really all that surprising to me. It's got this irresistible rhythm, and that's true for not only for the title tune, but for everything on this album.

SPELLMAN: Ooh, that's a great rhythm section with Bob Cranshaw, the bassist; Billy Higgins, the drummer; and Barry Harris at the piano.

HORWITZ: You bet. And it's really a great ensemble triumph with the tenor saxophonist Joe Henderson in there too. It's hard-driving and never boring. It never gets into that tired, kind of... you know A.B.... sometimes even well played jazz can fall into kind of a rut, just a kind of ching-ching-a-ching rhythm and repeated horn phrases and familiar harmonies. But these musicians are always challenging one another, always developing new ideas. That makes it sound as fresh today as it did 40 years ago.

HORWITZ: You know, A.B., I truly believe in the music speaking for itself, but we're living in a time right now when doing even the most routine activity seems to take on a new significance. It's like we have to rethink everything. Well, this music was recorded on December 21, 1963, barely a month after the assassination of John F. Kennedy. Yet there's this undaunted quality about it. It's uncompromisingly progressive. It's always driving and moving forward. And then, to achieve the kind of beauty and elegance that they do — and that Lee Morgan does especially well...

SPELLMAN: It's all the more remarkable in achievement.

HORWITZ: You got it.

SPELLMAN: The Sidewinder by Lee Morgan on the Blue Note label. It should be in your NPR Basic Jazz Record Library. For information about this and other selections in the library, check out our Web site.

HORWITZ: The NPR Basic Jazz Record Library is made possible with help from the Wallace Reader's Digest Fund.