Accessibility links
James Moody: 'Moody's Mood for Love' Proficient on both alto and tenor saxophone, James Moody was also a brilliant jazz flutist. He toured Europe in the 1940s with Dizzy Gillespie, Miles Davis, and Max Roach. This album is known for its popular title track, which is a version of "I'm in the mood for love." 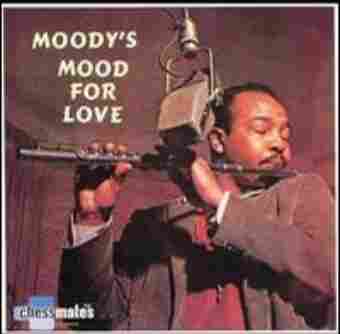 The cover of Moody's Mood for Love hide caption

James Moody on the Web

MURRAY HORWITZ, American Film Institute: He's going straight to the NPR Basic Jazz Record Library, A.B. That's James Moody's "Mood for Love," his famous version of "I'm in the Mood for Love" sung by Eddie Jefferson. And the name of the CD is Moody's Mood for Love.

You know, A.B., James Moody, even today, is underrated. He's always been a kind of jazz musician's jazz musician, and when this record was made in 1956, he was already a man with a big impact on the music as a composer, inventive saxophone soloist, thinker, and as one of the first important jazz flutists.

SPELLMAN: It really is an irresistible sound.

HORWITZ: Just delightful, isn't it? And that's one of the great things about James Moody on tenor saxophone and flute, as you'll hear on this CD, or on any instrument. He always makes the sound so attractive. And then, there's the clarity of his ideas.

Most of the time, what a jazz soloist is trying to do is the same thing any other composer tries to do: take a little piece of material — a phrase, a little melody, a rhythmic pattern — and develop it, restate it, recast it, make it bigger or smaller in ways that are expressive. And Moody is wonderfully clear and easy to follow, without being simplistic or playing down to us.

SPELLMAN: Murray, what about that vocal, though? It was a hit.

HORWITZ: Yeah, well, but not this vocal. Here's the story. In 1949, Moody recorded "I'm in the Mood for Love" on alto sax, and three years later, Eddie Jefferson wrote lyrics to Moody's solo. A singer named King Pleasure recorded it, and yes, it became a big hit, but Moody wasn't on that record. So in 1956, he called Eddie Jefferson and with mostly his regular band recorded this version and it's what gives the album its title.