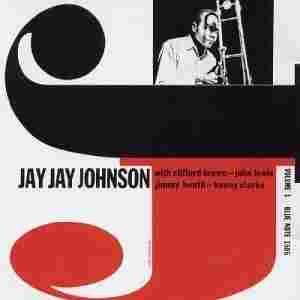 MURRAY HORWITZ, American Film Institute: Hello, I'm Murray Horwitz. A.B. Spellman and I don't usually get involved in useless arguments about who is the greatest this or that, but today's artist wouldn't generate too much controversy if we nominated him for the greatest of all jazz trombonists. He's J.J. Johnson, and we're putting his two-volume Blue Note set The Eminent J.J. Johnson in our NPR Basic Jazz Record Library.

A.B. SPELLMAN, National Endowment for the Arts: Have you ever noticed, Murray, how people with a lot of technique get accused of being cold?

SPELLMAN: The violinist Josha Heifitz and the pianist Vladimir Horowitz heard that a lot in classical music, and J.J. Johnson, Art Tatum, Wynton Marsalis have had to put up with it in jazz. But that excerpt from the 1953 set shows you a sweet tone with a romantic disposition. This one from Volume 2, cut a year later, shows you the technique, and the joined staccato phrasing that changed the way the trombone is played. But I dare anybody to say that it doesn't swing.

HORWITZ: J.J. Johnson was recording a lot of tunes in 1953 and 1954, so there are mostly standards on these sets.

SPELLMAN: That's true, Murray, but the brilliant John Lewis did contribute one very thoughtful composition called, "Sketch." I'm going to pull a section that I like out of it, because of the odd, rhythmic effect that Lewis put under Clifford Brown's muted trumpet.

HORWITZ: Ummph! Not a bad note on these two CDs and a lot of great ones, and on a very difficult instrument, the trombone. The set is called The Eminent J.J. Johnson. It's on the Blue Note label, and it's in the NPR Basic Jazz Record Library.

HORWITZ: The NPR Basic Jazz Record Library is made possible by the Lila-Wallace Reader's Digest Fund, and by our member stations.