Accessibility links
James P. Johnson: 'The Original James P. Johnson, 1942-1945 Piano Solos' James P. Johnson was sometimes called the "perfecter" of stride piano, the difficult piano form where the left hand "strides" up and down between bass notes and chords, while the right hand plays the melody. This album captures his agility with the technique. 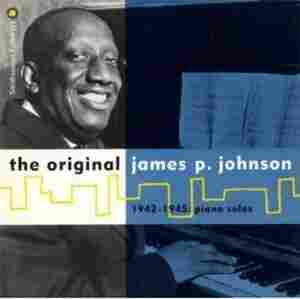 MURRAY HORWITZ, American Film Institute: Well, James P. Johnson might well have been the inventor of stride piano, A.B. But even if he wasn't, he was certainly the "perfector" of it. Not to get too technical, but stride piano was so-named because the left hand "strides" up and down between bass notes and chords, sort of in the middle range of the piano, while the right hand does these syncopated melodic figures. It's a very complex, very difficult kind of music to play. It's really tough. If it were swimming, it would be the butterfly stroke.

HORWITZ: The stride piano A.B., is such an athletic endeavor that you get the idea that it's a sort of circus trick-like a dog that stands on his head or something. But in the hands of James P. Johnson, it's a beautifully artistic, expressive tool, and you can hear that in a lot of these selections, such as this very elegaic "Blues for Jimmy."

SPELLMAN: Still, even in stride piano the blues comes through as fundamental, does it not?

HORWITZ: Yes it really does and Johnson played a lot more blues than most stride pianists like Fats Waller or Willie the Lion Smith. One of his greatest compositions I think is a beautifully moody piece called "Snowy Morning Blues."