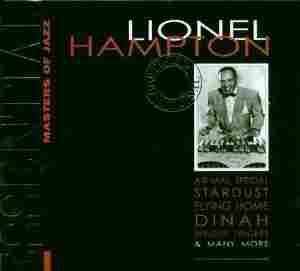 A.B. SPELLMAN, National Endowment for the Arts: The beautiful sound of Lionel Hampton playing "Midnight Sun." Murray Horwitz, has there ever been a bigger romantic in music than Lionel Hampton?

MURRAY HORWITZ, American Film Institute: No, I really don't think so, A.B. In fact, when Wynton Marsalis interviewed Lionel Hampton some years ago for NPR's Making the Music series, he asked Mr. Hampton to play "Midnight Sun." And when he finished, he said "What are you trying to achieve with that music, Mr. Hampton?" Lionel Hampton said: "A love feeling."

SPELLMAN: Well he most certainly did, and on any ballad he ever played.

HORWITZ: He is a great balladeer and there are some terrific ballads on this disc. I love what he does with "Star Dust." It's a great example of how Lionel Hampton develops a solo. He takes a musical idea and works with it. It's witty, it's swinging, and it's poignant, the whole way.

HORWITZ: Whew! I'm telling you! You know, a lot of times they use sports metaphors and other metaphors in jazz, and if you think of Lionel Hampton as a fighter, he's got this terrific killer instinct. He goes right for a knockout every time.

SPELLMAN: Now Lionel Hampton actually sort of "made" the vibes, didn't he? He did not invent the vibes, of course, but he made it as a jazz solo instrument.

HORWITZ: He's the first person to have ever recorded a solo on the vibraphone, or vibraharp — it depends which manufacturer made the instrument. It was in October of 1930, it was with the Les Hite Orchestra, and he recorded on Eubie Blake's and Andy Razaf's "Memories of You."

SPELLMAN: Now Hampton always kept a very strong band with him at all times, did he not?

HORWITZ: A.B., Lionel Hampton is one of those musicians who's always been able to attract good young players, and in fact a good number of stars. On this CD you'll hear people who at the time of the recording were very big stars — Harry James, Benny Goodman, Chu Berry. But in addition, there are people he helped introduce: the tenor saxophonist Dexter Gordon. On this disc you hear Benny Carter, you hear Charles Mingus, Illinois Jacquet, Charlie Christian, Big Sid Catlett, and Charlie Shavers. There's just an extraordinary number of first rate musicians on a lot of these cuts.

HORWITZ: I think it must have something to do with the incredible drive and propulsion that Lionel Hampton gets out of the vibes. It's called "mallet percussion," I mean you do hit it. You strike it. And as a result, there's kind of a striking force that keeps driving his playing onward. And he got his band somehow to do the same thing. You'll hear it in pieces like "Flying Home," which is his great signature tune with the famous solo by Illinois Jacquet on tenor sax.

SPELLMAN: So, we're recommending for your Basic Jazz Record Library, Lionel Hampton on the Essential Masters of Jazz series. It's on a British label called Proper Records. For NPR Jazz, I'm A.B. Spellman.

Lionel Hampton: His Life and Legacy