Accessibility links
Lester Young: 'The Complete Aladdin Recordings' Some critics claim that Lester Young never sounded the same after his stint in the military in the '40s, but The Complete Aladdin Recordings proves otherwise. This classic two-album set showcases Young's unique ability to float over bar lines with a light tone, rather than the forceful approach that was dominant during his time. 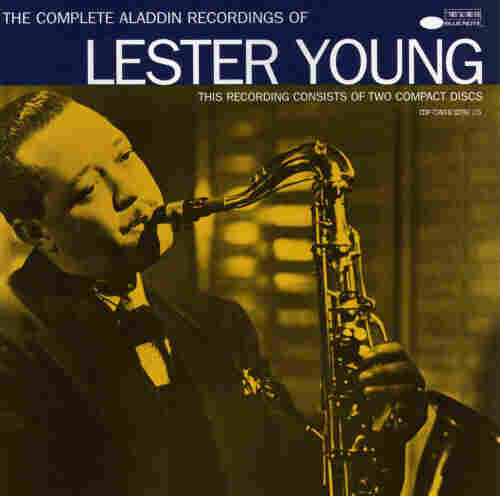 MURRAY HORWITZ, American Film Institute: Doesn't sound so idiotic to me! I mean you get a lot of valuable things at the Five and Ten Cents Store, and that sounds like a pretty good nickel history of jazz.

You're right. Lester Young the tenor saxophonist really gave jazz a voice in a way that it hadn't had before. He added a whole new dimension. He was to me, A.B., everything a great jazz player should be. And more than that, he was everything a player should be distilled down to its essence.

It's a very deceptively simple style. I mean, just listen to it and it sounds so laid back and relaxed and low key. And that's why it jumps up and bites you. Because as low key as it is, it's capable of having as profound an effect on you as anything you'll hear anywhere in music.

SPELLMAN: Like all great jazz stylists, Lester Young swings all the time, doesn't he?

HORWITZ: All the time, every measure. He came up with the Count Basie Orchestra. There was no other harder swinging ensemble in the universe, and he always kept that with him. It's that propulsive, forward-looking rhythm that always keeps you on the edge of your seat. Even if he's playing a ballad, you can hear him swinging all the time.

SPELLMAN: It seems to me that I've never heard Lester Young play and not care about what he was playing.

HORWITZ: What a great way of saying it, A.B. He had an emotional range that went from incredibly ebullient joy to profound sadness and everything in between. And what's extraordinary about Lester Young is he was able to go from one extreme to the other, in just a note, in just a fraction of a second, and carry you with him. And you end up almost crying and laughing at the same time.

SPELLMAN: Many of the soloists at the time were characterized as either being "hot" or "sweet." But Lester seems to be both. There's a beauty in his style that I think is stonger than sweet, but warmer than hot.

HORWITZ: That's true, it's really true. And that's why we have it in the Basic Jazz Record Library. It's music that can really make a difference in your life for the range and the intensity of its expressiveness. It all adds up to the sheer beauty of Lester Young which somehow never gets old and never gets dusty or faded. It's always as bright and vibrant as if he had recorded these things yesterday.

SPELLMAN: Here we're recommending the The Complete Aladdin Recordings of Lester Young. They're on the Blue Note record label, and it's a two-CD set. For NPR Jazz, I'm A.B. Spellman.