Accessibility links
Charlie Parker: 'Confirmation: Best of the Verve Years' John Lewis, the artistic director of the Modern Jazz Quartet, once said that Charlie Parker was the "only jazz artist whose every single solo was perfect." Confirmation: Best of the Verve Years captures "Bird" at the height of the bebop era when he was still in his twenties. 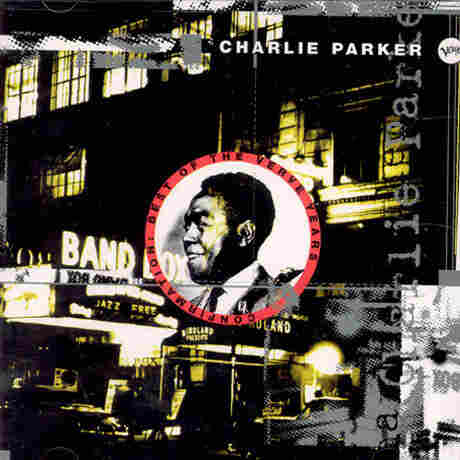 MURRAY HORWTIZ, American Film Institute: The saxophone in that recording is the instrumental voice of Charlie Parker, one of the two most important soloists in all of jazz history, along with Louis Armstrong. A.B. Spellman, why this record, Confirmation: The Best of the Verve Years?

A.B. SPELLMAN, National Endowment for the Arts: Because it catches Charlie Parker in bebop's height. It catches Charlie Parker at a time when the basic kinks had been worked out of bebop, but it's still very, very fresh. Bird is still in his twenties, and he's working with other musicians, for the most part, who are still in their twenties. And they're all very much alive.

HORWITZ: So Bird — Charlie Parker — is playing a style of music called bebop. What do we mean when we say bebop?

SPELLMAN: We're talking about the beginning of modernism in jazz. We're talking about music that sort of left the dance floor. Some people could still bop to it, but it was not dancing music, it was music you would sit down and listen to. And it was music that got into more theoretical kinds of improvisation — chord change improvisation as opposed to the sort of theme and variations, the melodic embellishment playing that characterized swing.

HORWITZ: Tell us about some of those people you're talking about — the young players. There's some extraordinary musicians on these recordings.

SPELLMAN: Yes, there's some real Hall of Famers here. You have Kenny Clarke, who was the modernist innovator of the drums, and Max Roach who was his acolyte. There's Dizzy Gillespie, Miles Davis, Thelonious Monk, and a host of others.

HORWITZ: But throughout all the recordings on this CD, what one really hears is the magical saxophone of Charlie Parker.

SPELLMAN: Charlie Parker is I think perhaps the most articulate saxophonist ever. By articulate, I mean that he seems to be saying exactly what he means all the time. And what he has to say is deep indeed.

HORWITZ: The composer and pianist John Lewis — the artistic director of the Modern Jazz Quartet — said one time that Charlie Parker was the only artist he knew of in jazz whose every single solo was perfect. How do we get a sense of that from this CD?

SPELLMAN: I think Murray that that's one of the reasons that we did select this particular recording, because it does include the Charlie Parker with string sets. And that gives you arrangements that are not so great, but they do provide a backdrop for Charlie Parker so that his solos will stand out.

HORWITZ: What were the roots of this style of his and the fact that he could play like nobody before or since?

SPELLMAN: Charlie Parker was a Kansas City musician, and Kansas City was noted first of all for swing. That is where his origins were and Charlie Parker indeed does have impeccable swing all the time, because of his great sense of rhythm.

But also the blues is very strong in Kansas City. He is a musician who is immersed in the blues. It is as natural for him as eating breakfast.

HORWITZ: The name of this two-CD set is Charlie Parker, Confirmation: The Best of the Verve Years. Not surprisingly it's on the Verve label. For NPR Jazz, I'm Murray Horwitz.