Accessibility links
Air Quality Concerns Threaten Natural Gas's Image Some studies show that new gas production could cause air pollution in portions of Colorado, Texas and Louisiana. Experts say although the amount of pollution is significantly less than that caused by coal-fired plants, natural gas companies will need to control pollution if the industry wants to grow. 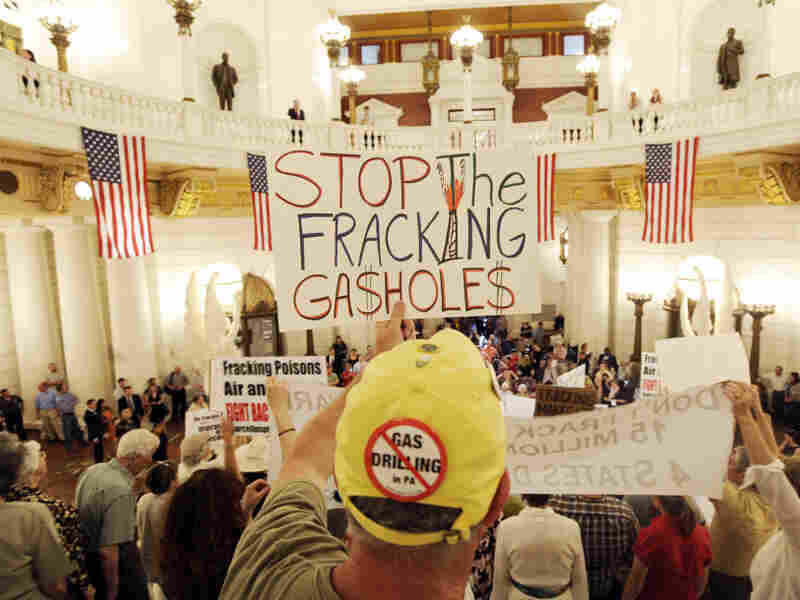 An environmental clean water protester participates in a rally at the Pennsylvania state capitol in Harrisburg against the drilling of the Marcellus Shale natural gas formation. Bradley C. Bower/AP hide caption 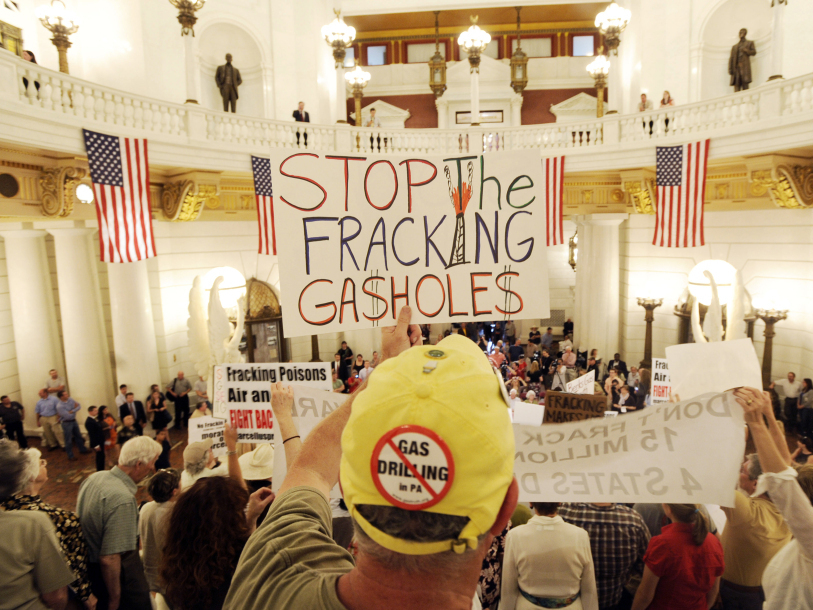 An environmental clean water protester participates in a rally at the Pennsylvania state capitol in Harrisburg against the drilling of the Marcellus Shale natural gas formation.

Massive stores of natural gas that lie underneath big portions of the United States offer a cleaner source of electricity to a country that relies heavily on coal, but producing all that gas also can pump lots of pollution into the air.

Gas production already has caused unhealthy air in Wyoming's Sublette County and Utah's Uintah Basin. And experts project that booming shale gas developments like Haynesville, stretching through Texas and Louisiana, and Marcellus, which lies beneath several Mid-Atlantic states, will start contributing to unhealthy levels of ozone or smog in coming years.

"This isn't just next to where the development is actually happening — the poor person living downwind of the compressor — this is ozone levels in Philadelphia and [Washington] D.C. and New York City and places like that," says Carnegie Mellon University professor Allen Robinson.

Industry officials argue that the benefits of natural gas for air quality far outweigh any negatives, but experts caution that much cleaner production practices are needed to prevent the industry from becoming an air quality villain.

In the hilly countryside of the southwest corner of Pennsylvania, Kristen Judy and her mother, Pam, are getting an early whiff of the air pollution problem that could be on the way from the Marcellus gas industry.

"It just hits you in the face and about knocks you over," says Kristen Judy.

"It smells like some kind of petroleum but you can't pinpoint it," Pam Judy adds.

They're talking about fumes from a gas compressor station that went in three years ago just 700 feet from their house.

Infrared video showing natural gas air pollution emissions at an Energy Corporation of America compressor station in Greene County, Pa., which is located about 700 feet from the Judys' home. The emissions aren't visible with the naked eye.

Wisps of exhaust from the compressor station head toward the Judys' place.

White exhaust rises from a building where engines compress the gas for a pipeline. Wavy transparent plumes seep from a big tank that holds liquids extracted from the gas.

Across the road, the same company runs another compressor station. A quarter-mile away, a different company is drilling a new well and burning the gas in a huge flare that lights up the night sky at the Judys' house.

"This property belonged to my great-grandparents. I waited years to get a piece of this property. Truly, within three years of moving here it's been destroyed," Pam says.

First Pam, her husband and two grown kids started getting headaches, and then fatigue set in. They've also had dizziness, nausea and nosebleeds.

Their report says levels were low and don't pose any short-term health risks. But their study doesn't address cumulative effects or cancer risks.

"They know the chemicals are here, but yet they say the levels aren't high enough. That was a snippet in time. To me any level is too high," says Pam, who has been fighting to get the company that owns the plants to clean them up.

Energy Corporation of America runs the two compressor stations near the Judys' house. A top company executive said he has two valid permits. He refused to be interviewed.

In an email, a spokeswoman for the Pennsylvania Department of Environmental Protection said officials recently met with the company to discuss pollution controls. She refused to give details of those discussions. 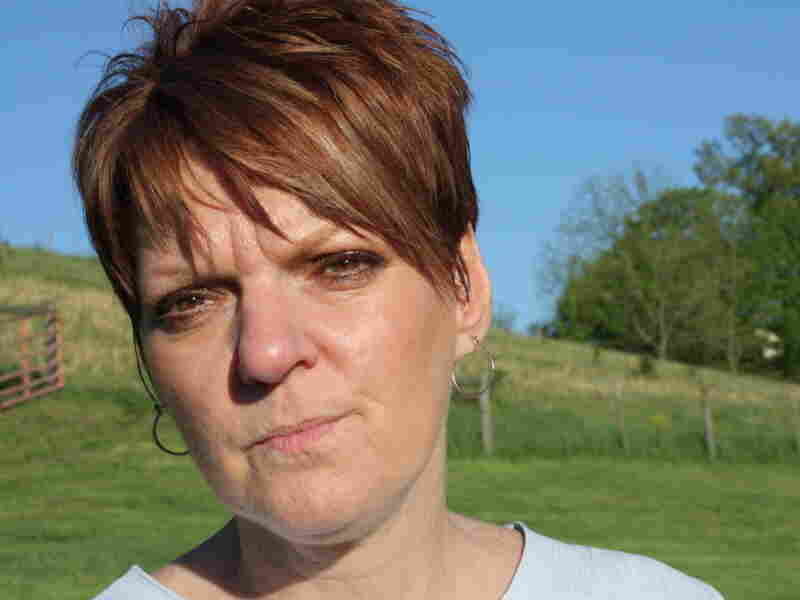 Pam Judy stands in the yard of her home in southwest Pennsylvania. Members of her family say they have been affected by unhealthy air quality, which might be connected to natural gas fumes from a compressor 700 feet from their house. Elizabeth Shogren/NPR hide caption 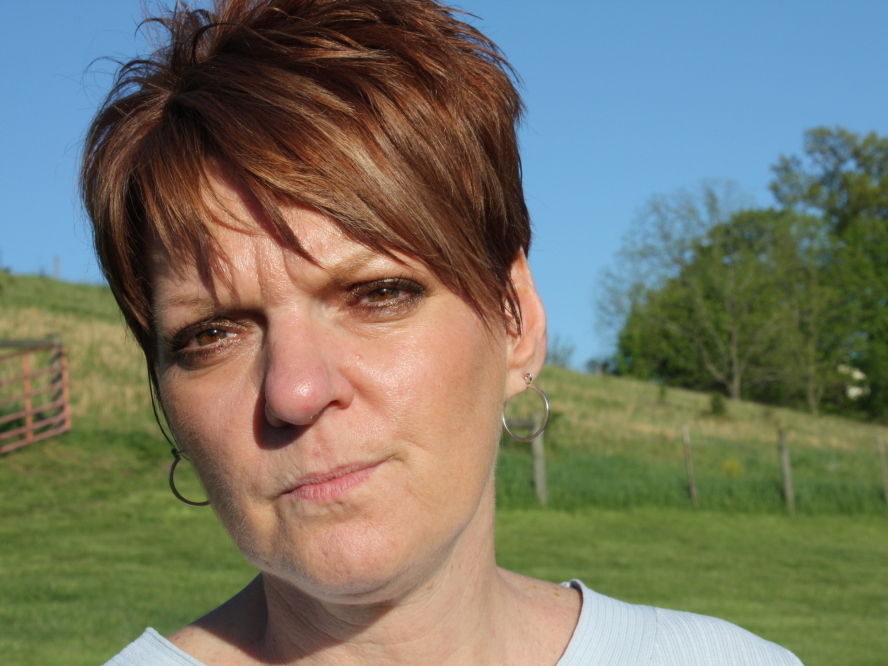 Pam Judy stands in the yard of her home in southwest Pennsylvania. Members of her family say they have been affected by unhealthy air quality, which might be connected to natural gas fumes from a compressor 700 feet from their house.

Robinson, an engineering professor who focuses on air pollution, agrees with Pam Judy that the limited monitoring the state did may not capture the true risks to local people.

"I think these really sort of short snapshots that people have been doing provide a potentially very misleading view," he says.

Much more monitoring would be needed to get an accurate picture, he says, but resources are limited.

The air pollution impacts of the Marcellus shale formation are not just local, he says.

Lots more polluting equipment will be on the way if the industry ramps up as expected and spreads to New York and other states.

Robinson says the nitrogen oxides and volatile organic compounds from all those sources could contribute to regional ozone or smog problems near the development around Washington, D.C., New York City and Philadelphia. Robinson and his graduate students are working up an analysis of these impacts. Early drafts of their work predict significant effects by 2020, he says.

That's particularly troubling since ozone levels are already unhealthy in many areas downwind from the Marcellus. Ozone is linked to lots of health problems from asthma attacks to heart failure to premature deaths.

But Robinson only has to look out his office window to see that natural gas can improve air quality, too.

For 100 years, the central heating plant next to his university burned coal and sent lots of noxious exhaust into downtown Pittsburgh. Just recently it switched to natural gas, and the air quality got a lot better.

"If we use that natural gas to displace older coal-fired power plants without emissions controls, like the one we're looking at right here, then there are going to be some benefits as well from [the] traditional air pollution perspective. And so it's kind of a complicated calculus," he says.

The industry won't be able to grow in the way it needs to grow unless it uses the cleanest technologies. It will run into a legal brick wall.

Still, Robinson worries that in the rush to produce the gas the country isn't giving enough attention to the health risks.

"They're lots of examples of this through human history where we go, 'Hum, maybe we didn't really want to do that,'" Robinson says.

Robinson points to mounting evidence of cumulative damage to air quality from natural gas production elsewhere in the country.

Wyoming's Sublette County is home to a booming gas development — and not much else besides antelopes and sage grouse. For 13 days this winter, ozone levels there were unhealthy.

Utah's Uintah Basin also started having spikes of unhealthy air. Some studies show that new gas production could be on the way to causing air pollution problems in portions of Colorado, Texas and Louisiana as well.

Klaber acknowledges that now that Marcellus is growing so large, it does create some air pollution.

"But certainly not at a point where the air emissions impacts could possibly trump the benefits to this country's air quality that comes from using this source," she says. "You can't find a cleaner-burning fossil fuel. And it's very important that we keep our eye on the ball."

Utility lawyer John Hanger is also a booster for natural gas. He used to head Pennsylvania's Department of Environmental Protection. But he warns that the industry could hurt itself if it fails to control air pollution.

Hanger predicts that big cities downwind from Marcellus that already struggle with air quality will sue the gas companies if they don't control their pollution.

"The industry won't be able to grow in the way it needs to grow unless it uses the cleanest technologies," he says. "It will run into a legal brick wall."

Hanger says local, state and federal governments must require the cleanest practices. For instance those compressor stations near the Judys' could run on electricity.

A crackdown could be on the way. The federal Environmental Protection Agency plans to propose new rules designed to cut pollution from natural gas operations this summer.