Accessibility links
Great Lakes May Beat Atlantic To Offshore Wind States along the Atlantic Coast are vying to be first in the country to put wind turbines offshore. But an Ohio group aims to build the first offshore wind farm in America — in fresh water. 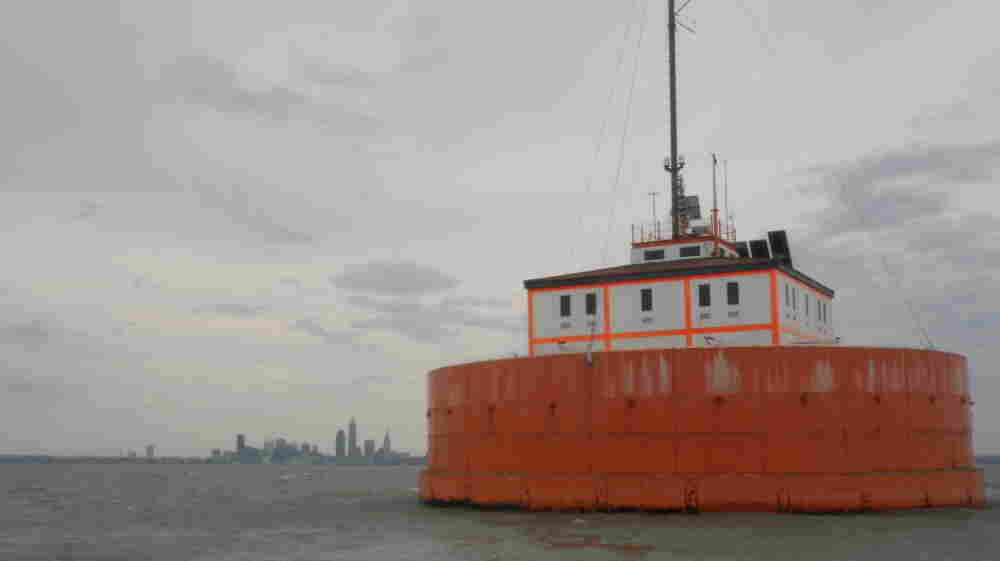 Investors hope to someday build lake-based turbines on Lake Erie. Right now the only structure on the water outside Cleveland is a century-old, ironclad water intake "crib," which is topped with instruments that monitor wind speeds and other meteorological data. Jeff St. Clair/WKSU hide caption

States along the Atlantic Coast are racing to be first in the country to put wind turbines offshore. But a group in Ohio says the first offshore wind farm in America isn't likely to be in the Atlantic but in the fresh waters of Lake Erie about 7 miles off the Cleveland coast. 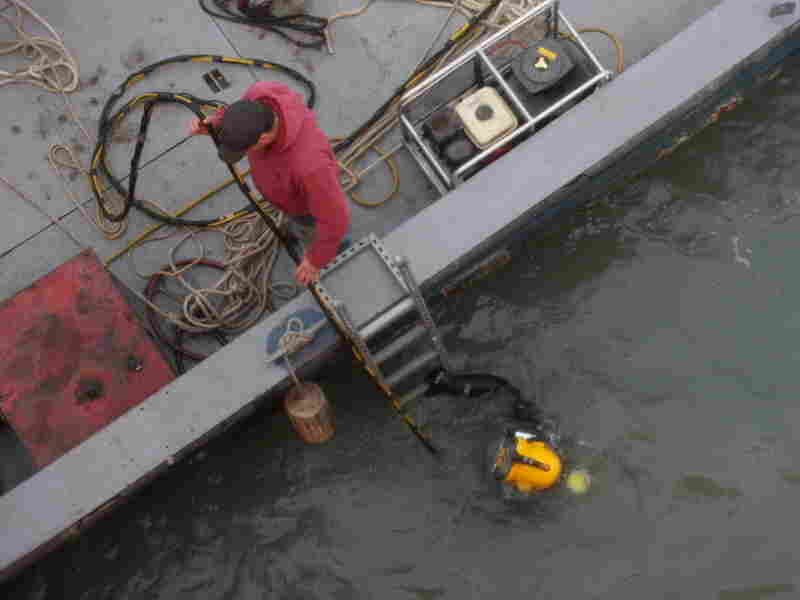 Chad Stephens helps diver Tom Warvell recover an ice sensor from the bottom of Lake Erie. The two are part of a company (specializing in underwater recovery) working with engineers studying how ice floes during the winter would affect the foundation of a lake-based wind turbine. Jeff St. Clair/WKSU hide caption 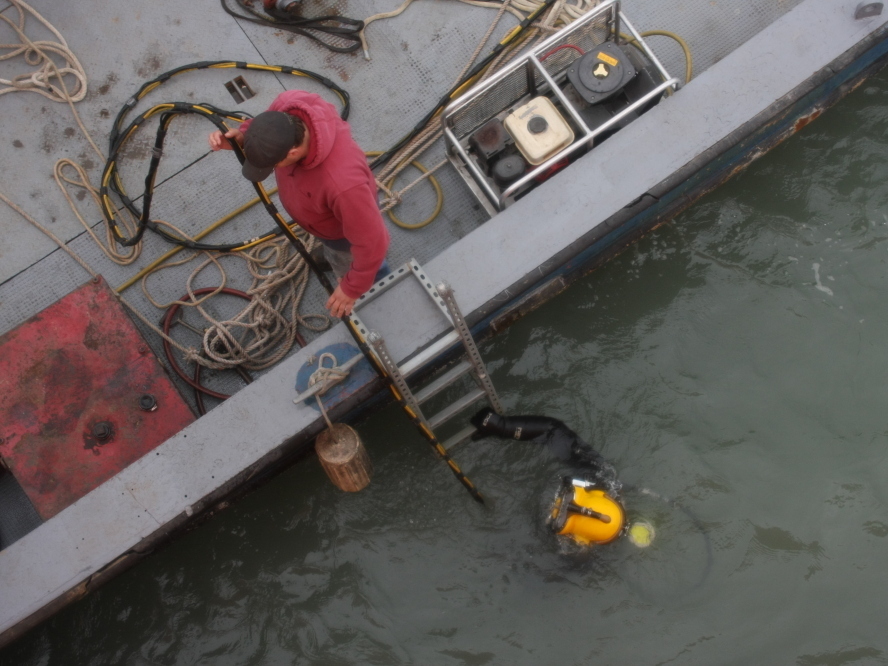 Chad Stephens helps diver Tom Warvell recover an ice sensor from the bottom of Lake Erie. The two are part of a company (specializing in underwater recovery) working with engineers studying how ice floes during the winter would affect the foundation of a lake-based wind turbine.

A dull gray salvage boat chugs out of the Port of Cleveland on a calm spring morning; it's part of the early stages of what some hope will become a major industry in Ohio. But today, the prospect of dozens of massive wind turbines sprouting from the lake floor seems remote.

Right now, there's only one structure on the water — a century-old, ironclad water intake "crib" that juts 30 feet out of the water. A helmeted diver tethered to a nearby boat sinks into the murky water. His job is to recover an ice sensor sitting 50 feet down on the lake bottom.

Meanwhile three engineers climb the metal steps to the crib's roof where storm-battered instruments are gathering wind data. One of them, Aaron Godwin, says the numbers demonstrate the lake's energy potential.

"Actually this would be a good example of a day where we would be generating some pretty decent power," Godwin says. "You'll see that the instruments are spinning faster as you go up in elevation; again, one of the reasons you come out here is because it's unobstructed; it's clean wind."

Promoters of clean wind say, in the next decade, hundreds of turbines in Lake Erie could produce 1,000 megawatts of power — enough for 200,000 homes.

The plan is to start next year with a five-turbine pilot project within sight of downtown Cleveland. Its $100 million cost would be raised from investors and loans.

"The Great Lakes will really be home to offshore wind long before we see it in the Atlantic," Wissemann says.

But first engineers need to solve a problem that most ocean wind farms don't have — massive floes of shifting ice each winter. 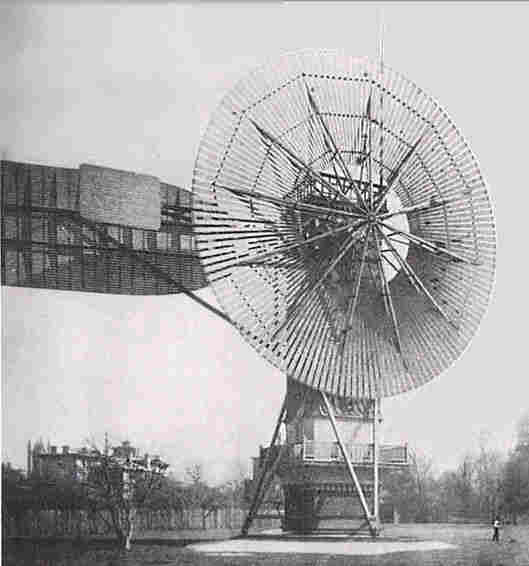 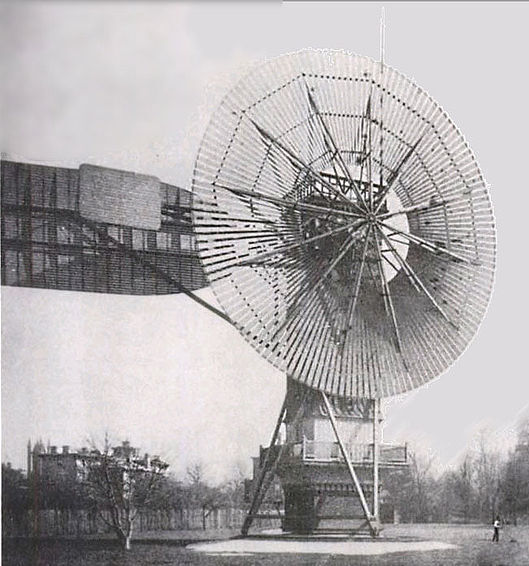 While engineers in Cleveland hope to build America's first offshore wind farm, windmills have a history in the state.

The machine's tower was 60 feet tall and its wheel 56 feet wide. It weighed 40 tons and at its peak, generated 12 kilowatts — enough to power 350 lamps, three motors and two arc lights.

Data from the ice sensor recovered from the lake bottom will help engineers like Dave Mattheisen design foundations that can withstand those icy pressures, without "over-engineering" them. Each turbine will cost more than $20 million — so much money that it could take decades to recoup the investment.

But Wissemann insists the high costs of the pilot project will be outweighed by the long-term benefits.

"What we're talking about here now is a project that maybe produces high-priced power, but the trade-off is to get jobs," he says.

Not everyone believes it's worth it.

Cleveland industrialist Dan Moore has stakes in a dozen businesses, including one that builds turbine blades. But he says the numbers Wissemann is throwing around just don't add up.

"The concept of building windmills in Lake Erie is nonsense. $100 million for 3.4 megawatts, it doesn't even come close to making sense," Moore says. "It's Alice in Wonderland." (Moore is referring to his projections of production for a pilot project to test the proposed wind farm.)

"The math doesn't work; you're off by a decimal point," he says.

Some other Great Lakes players are backing away from offshore wind turbine development because of environmental concerns. In Michigan, lawmakers and residents are concerned about disturbing the lake's natural beauty. Meanwhile in Canada, all of Ontario's offshore power projects have been put on hold.

But backers in Ohio say they've looked at the realities, and they're still optimistic. Lorry Wagner, head of the nonprofit Lake Erie Energy Development Corp., says he understands the challenges.

"We know we have to get [the cost] down to approximately half of what it is today and that's an immense challenge; we don't have any illusions about how difficult this is going to be," Wagner says.

The world's first freshwater wind farm went on line last year in Lake Vanern, Sweden. Engineers in Cleveland are hoping to benefit from lessons learned there. And they say the project's engineering problems are actually the easiest to solve — it's the political and economic challenges that are likely to remain the thorniest.