Accessibility links
'Nerd Do Well': Simon Pegg On 'Becoming A Big Kid' In his new memoir, pro-nerd Simon Pegg talks Star Wars, comedy and the zombie apocalypse. And he weighs in on the ongoing genre controversy — the "schism in the church of the undead" — slow zombies versus fast zombies? Definitely slow zombies, Pegg says. 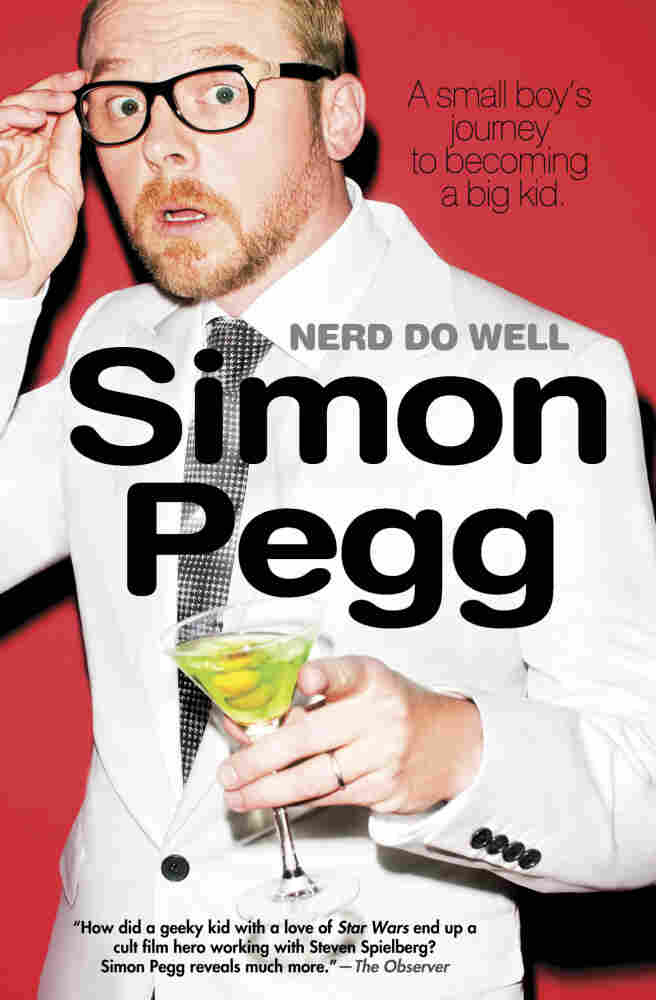 Growing up in Gloucester England in the 1980s, Simon Pegg idolized American action heroes. Obsessed with Star Wars, he was the kind of kid who put a picture of Carrie Fisher/Princess Leia on his bedroom wall. In short, a nerd, who would channel his boyhood passions into a career in comedy and professional nerdom.

Pegg is best known for what has become a cult classic zombie comedy Shaun of the Dead. He also co-wrote Hot Fuzz, the buddy cop film set in an England village where a missing swan is a call to action. He joins NPR's Renee Montagne to talk about his new memoir, Nerd Do Well: A Small Boy's Journey to Becoming a Big Kid.

Before he grew up into a "big kid," Pegg remembers he played Star Wars with his friends. Pegg identified with the "whiny" Luke Skywalker — even though he says Han Solo was obviously cooler. "Maybe my identification with [Skywalker] was that I was kind of a farm boy, miles from anything interesting and maybe [I] related to his desire to get involved with the fight against the evil empire."

Nerdy from a young age — and funny, too. Pegg still recalls the first joke he ever told — at age 6 — to an audience of his mother and grandmother. "I remember the intellectual process," Pegg says. He knew what he was about to say might be funny, but he pretended to play it cute, instead. "We were talking about my friend and I said, 'Oh his dad's a dentist.' And she said, 'Where does he practice?' And I said, 'No he's a real one.'" A simple joke, Pegg acknowledges, but he was young, and it hinted at what was to come. "I seemed predetermined to seeing things that way," he says.

His love for zombie movies came early, too — Pegg says he was influenced by George Romero, director of the cult classics Night of the Living Dead and Dawn of the Dead. "A sort of right-wing group banned a whole bunch of what they called 'video nasties,'" Pegg recalls. "The hunt for a copy of Dawn of the Dead was like the Holy Grail for teenagers in the '80s where I lived. Before I saw it, I knew all about it: I knew there was a guy who got the top of his head chopped off by a helicopter, I knew there was a moment when someone got their guts ripped out, and it was like: I gotta see this, this sounds great!" 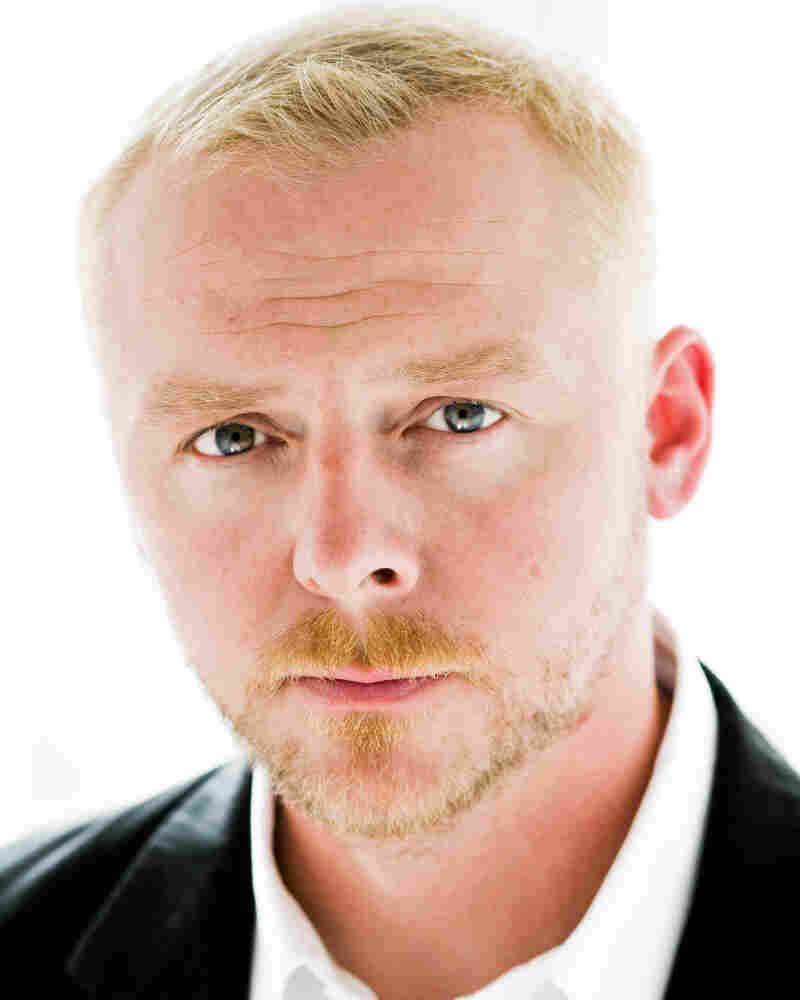 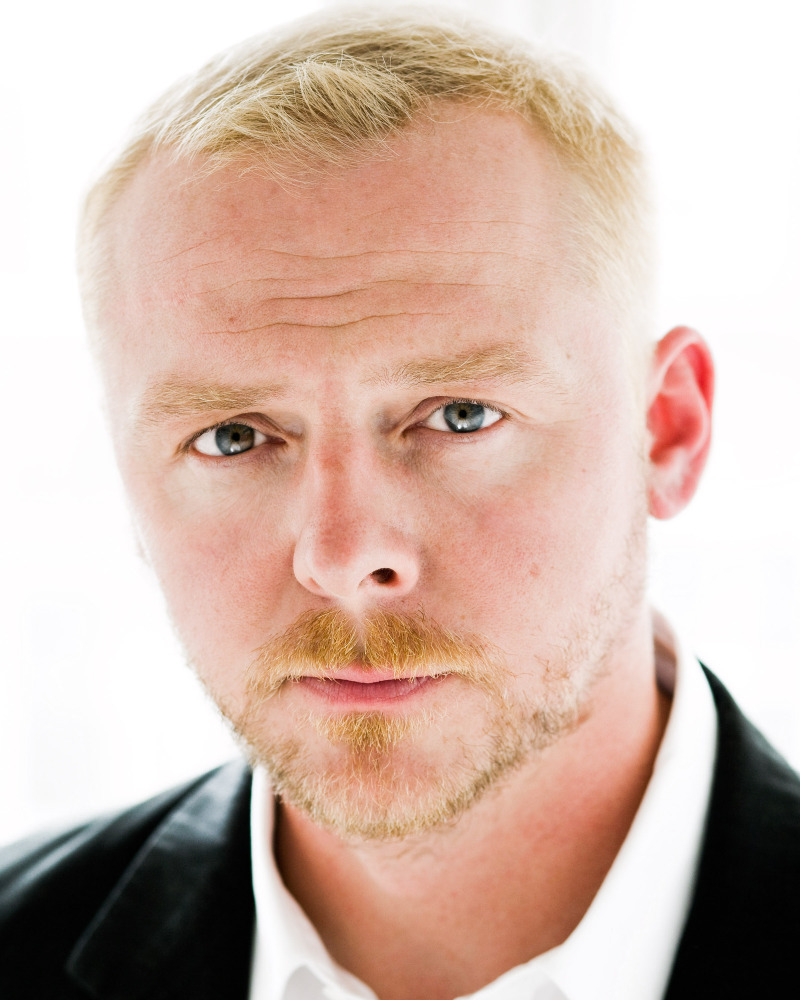 Simon Pegg is an actor, comedian, writer, director and producer. Nerd Do Well is his first book.

Pegg Plays 'Not My Job': He Answers Three Questions About Ice Hockey

Pegg had seen stills from Dawn of the Dead in his Encyclopedia of Horror — which made it all the more enticing. He couldn't wait to see the American mall "awash" with blood. "There was also something frightening about it as well," Pegg admits. "There was an idea that you could watch these films and be mentally scarred by them. You'd hear rumors about these kids that found a pirate video of Dawn of the Dead and they'd all gone mad and killed each other. These apocryphal stories ... would go around school."

One day, when Pegg was 12 years old, a friend came by with a coveted copy of Texas Chainsaw Massacre. "I was so frightened to watch it that I actually said no," Pegg says. "Looking back, I'm glad, because that film is so scary and brilliant but ... I wouldn't have slept for a week."

Fast forward two decades, and Pegg was well into his career writing his own zombie films. In Shaun of the Dead, which Pegg co-wrote, Ed is a young slob (that's one below a slacker, Pegg explains) who must grapple with family and relationship problems ... and the zombie apocalypse. "Even in the face of a zombie apocalypse your life only changes in so much," Pegg explains. "You find yourself in the middle of a zombie apocalypse, nothing else changes: you're still scared of spiders, you still like the same music, you still have the same little quarrels with people."

(At one point in the film, the characters realize that vinyl is an effective weapon against the zombies, so they start to throw records — but they have to choose carefully because Shaun doesn't want to lose his original pressing of Blue Monday or The Stone Roses' second album.)

As for the raging genre war over whether zombies should be slow or fast, Pegg falls solidly on the side of slow-moving zombies. "It is sort of a schism in the church of the undead," Pegg explains. "I personally don't like fast zombies because, A) it's fun to get annoyed about something so trivial and B) I think it removes their appeal."

In popular film history, zombies have become known as pathetic, tragic figures; Audiences can feel sorry for them, Pegg says. "They don't have any agenda. They just do what they do, which is eat flesh. And when they start running around screaming like Velociraptors, you just don't care about them anymore, you just think: go away, you noisy speed demon."

What I actually wanted to do was write fiction about a suave, handsome superhero and his robotic butler. The story of a tricked-out vigilante, with innumerable gadgets, a silver tongue and deadly fists; like Batman without the costume and a more pointed 'gay subtext.'

Sure, it's not particularly original but it's far more interesting than my life. I don't even have a robotic butler. Not any more.

The literary public would be far better served with heroic tales of daring, midnight infiltrations and hip-smashing sexual prowess. The man I met from the publishing company, however, thought it would be better to write something a little more personal, more real.

'Oh boring,' I screamed at him, clearing my desk in one decisive swipe. How could my own mundane personal experience possibly outstrip the adventures of a man with a bullwhip and forty throwing knives concealed in the lining of his snugfitting dinner jacket? 'Trust me,' said Ben, winning me over with a smile that reminded me of Indiana Jones and subsequently that I had subconsciously stolen the bullwhip thing from Raiders of the Lost Ark.

I liked Ben as soon as I met him. He was big, specky and friendly. Like a Guardian journalist who had turned into the Incredible Hulk while maintaining his smart, liberal sensibility, rather than succumbing to dumb monosyllabic grunts, like someone who writes for Nuts magazine. I knew we were going to get on after our first meeting, during which my dog Minnie honked up a disgusting heap of canine spew all over my office sofa. He laughed nervously and pretended not to be nauseated by the stink, for which I was immediately grateful. Minnie isn't a sickly dog, she chucks up with a corresponding frequency to myself (once every few months) and she doesn't even drink as much as I do. I appreciated Ben's tolerance of her gastric faux pas and thus trusted his judgment of my proposed book idea.

An autobiography then, I chin-scratched, weighing up mild naffness in the face of not writing anything at all. Ben offered an angle: an account of my journey from ordinary nerd to nerd participating in the world that made him nerdy in the first place. I liked this. The circularity appealed to me as a narrative device. I am often struck by the irony of my adult life in light of my childhood passions. Also, I secretly intended to ignore his suggestion and write about the superhero anyway. Resolving to humour him with the biographical stuff and sneak the real book in between the cracks. It might just work.

Much of what is written about me, usually during spurts of promotion, seems to dwell on the idea of an ordinary, guy-next door, non-Hollywood, unattractive loser, somehow succeeding in this fabled land of facile opportunity, despite being handicapped by having red hair (I don't) and severe physical deformity (my wife thinks I'm handsome). So many articles begin with a passage about why I should not have succeeded, due to my lack of 'Hollywood' good looks, as if that has anything to do with being an actor.

And herein lies my initial reluctance to pen something biographical as opposed to fantastic. I'm not entirely comfortable with the 'fame tax.' There seems to be a consensus these days, a received wisdom, unquestioned even by those who are victim to it, that all actors do what they do because they want to be famous. Not because they enjoy the process but because they crave the product — not even the product, the consequence of the product, which is fame — and by this compulsion are considered to be 'show-offs,' deserved of some kind of punitive comeback for their desire to be adored. It is as if some ancient rule setter folded his arms back when the concept of celebrity was emerging and said, 'OK, you can be famous, but by way of payment, you must surrender your private life and be willing to talk about it as if everyone is entitled to know.' I don't think that's particularly fair.

I hate it when I am asked about my family. I get all sweaty and agitated and subtly try to deflect the question towards my dog, whose private life I am willing to sacrifice because she doesn't read heat or watch E!. She doesn't consume any kind of media, be it entertainment or factual, although she did once watch the opening moments of John Carpenter's The Thing, mainly because it was on a really big TV and involves a husky dog running across a snowfield being chased by a helicopter. She wasn't particularly concerned with the narrative context — a seemingly innocent and ordinary dog is pursued across the tundra by desperate Norwegian scientists who, we later learn, rightly believe the hapless pooch to be a shape-shifting alien life form intent on assimilating the entire human race. To Minnie it was just a dog running around in the snow. If she thought anything it would have been, 'When did it snow? And where did that big window come from?' Of course she thought neither because dogs can't process abstract concepts, as much as we'd like to think they can. How could she think in such sophisticated terms? Her favourite pastime involves eating socks. See, there I go again. It's like a linguistic screen saver. Whenever my brain switches off I start talking about my dog. It happens all the time in interviews, as this extract from a recent interrogation demonstrates.

Journalist: So, you recently had a baby. What's it like being a father?

Me: My dog likes eating socks! 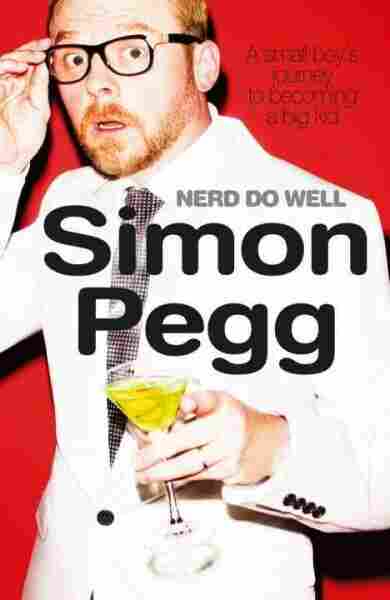