Accessibility links
Is Huntsman Wrong To Skip Iowa? Lady Liberty makes a nice backdrop for a presidential announcement. But can a little-known candidate capture the GOP nomination without introducing himself to the nation in the Iowa caucuses?

Is Huntsman Wrong To Skip Iowa?

Is Huntsman Wrong To Skip Iowa? 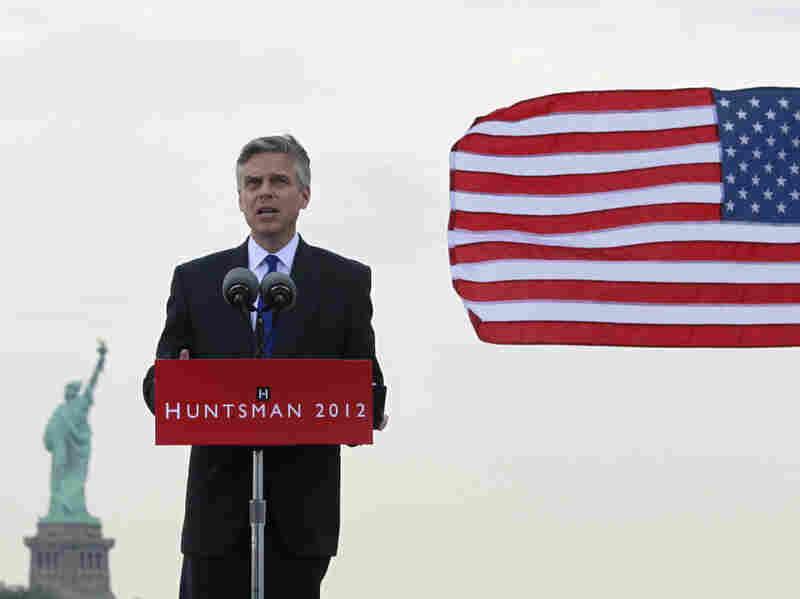 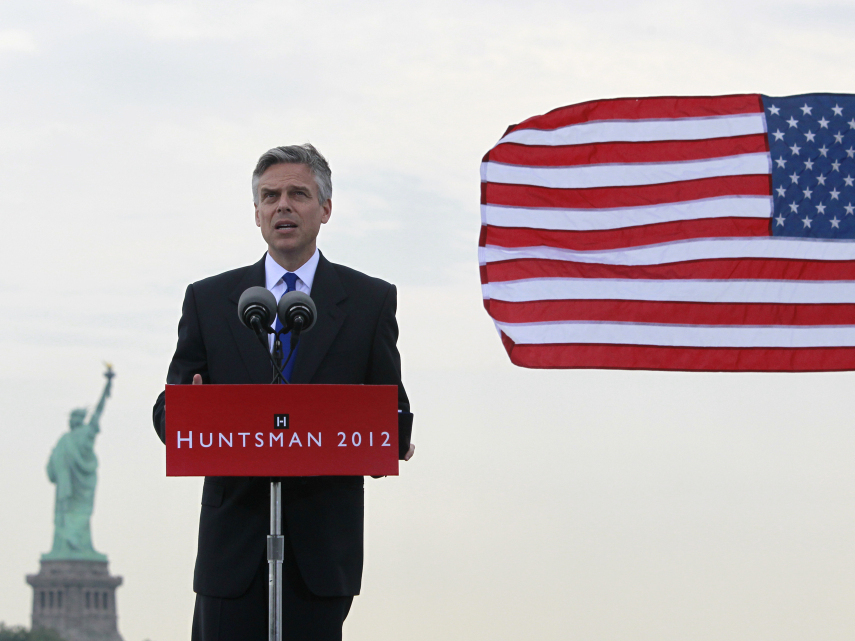 It was no accident that Jon Huntsman chose the Statue of Liberty as the backdrop to announce his bid for the Republican presidential nomination. Sure, the scene had echoes of Ronald Reagan, who used the same spot to launch his 1980 White House run. But it was also far from the cornfields of Iowa.

The former two-term Utah governor plans to keep his distance from those cornfields in his quest to go from a largely unknown politician to his party's pick to take on President Obama in 2012. Huntsman, 51, barely registers in presidential preference polls. That could be in part because he just returned from a two-year stint as the U.S. ambassador to China in the Obama administration.

But rather than using the living rooms of Iowa as a launching pad to introduce himself to the nation, Huntsman, the scion of a wealthy Mormon family, has said he will skip the Hawkeye State's first-in-the-nation presidential nominating contest.

"I'm not competing in Iowa for a reason," Huntsman said recently, asserting that his opposition to agricultural subsidies, including those for the corn-based ethanol fuel, would prove fatal to his efforts in Iowa.

That decision could be a practical nod to the political realities of the state, where former Arkansas Gov. Mike Huckabee, an ordained preacher and evangelical Christian, beat out former Massachusetts Gov. Mitt Romney in the state's 2008 presidential caucuses.

Or it could be a big and early opportunity lost for the married father of seven who may well have found a receptive Midwestern audience for his announcement-day promise of civility and leadership on the economy and taxes, with an eye to "local solutions" for the nation's problems.

Huntsman's campaign remains unpersuaded, noting the pro-ethanol-subsidy sentiments of successful caucus candidates of the recent past.

In the last campaign, the eventual Republican nominee finished fourth in the state's caucuses. A look at the breakdown of the GOP caucus vote in 2008:

Haus argues that this time around the economy trumps everything, even though Iowa has not been as hard hit as much of the rest of the country.

"What's driving the cycle in Iowa is the jobs outlook, the federal deficit and long-term debt," Haus says. "To the extent that Gov. Huntsman has this grand vision for America, and to take on his former boss on the economy," Haus says, "he really ought to come out here and test the message."

Experts on the state and its caucuses, including Iowa pollster J. Ann Selzer, have made the case that a more moderate candidate like Huntsman has running room in Iowa, where social conservative candidates including former Pennsylvania Sen. Rick Santorum and Minnesota Rep. Michele Bachmann may well divide votes from that wing of the party.

"The bottom line is Iowa is just wide open," says Brian Kennedy, an Iowa public affairs consultant who is working for the Romney campaign.

Romney, considered the early GOP front-runner nationally, has said he will compete in Iowa, though he is skipping the high-profile Republican Party presidential straw poll in August that's considered an early measure of strength in the state.

Huntsman's plan to avoid Iowa, and chart a nomination course through the primaries in New Hampshire, South Carolina and Florida — where he's establishing his campaign headquarters — mirrors that of Arizona Sen. John McCain in 2008.

But there are significant differences for Huntsman going in.

McCain had run before. He had long been a national figure with a heroic war story. He also capitalized on his appeal to New Hampshire independents who had admired him since his upstart 2000 presidential run — a dynamic that helped him win the state's primary, besting Romney.

Romney, also a Mormon, characterized his runner-up finishes in Iowa and in New Hampshire as two "silvers." Romney did eventually win in the Nevada caucuses, but he finished a distant fourth in the South Carolina primary and sealed his fate with a loss to McCain in Florida 11 days later.

Now it's Romney who has the front-runner's momentum. Early polls in New Hampshire, where he has a vacation home, show him with a comfortable lead but in a clearly changeable environment.

If you want to run for president and you don't come to Iowa, you do so at the peril of your own political campaign.

Huntsman, who did not participate in the two early GOP candidate debates, has tested the waters with a recent visit to the New England state and an emerging McCain-like strategy of targeting independents and moderate Republicans.

"We will run the most aggressive New Hampshire campaign in history," Huntsman spokesman Tim Miller says.

But Huntsman still has a lot of work to do introducing himself to voters. A recent Magellan Strategies poll showed that 42 percent of New Hampshire voters surveyed said they'd vote for Romney if the election were held today. Huntsman was named by 3 percent as their choice.

Huntsman's candidacy seems puzzling to much of the GOP congnoscenti.

At a time when the party has been moving right, and "who can beat Obama" has become a mantra, Huntsman has to assemble a message that explains his two years as Obama's man in China, his moderate view on social issues (including support for same-sex civil unions), and his work on health care reform in Utah.

Huntsman has also been battling a perception that he's something of an accidental candidate, initially more interested in a 2016 run but persuaded to jump into the unsettled cast of 2012 hopefuls.

Huntsman dismisses the notion that he's just laying the groundwork for a future run. "Jon Huntsman is completely focused on this election," says campaign spokesman Miller. "You don't go through a grueling presidential campaign unless you believe you can win."

Huntsman hopes to run on his record as Utah governor. His overwhelmingly Republican state received the highest rating for its management from the Pew Center on the States in 2008. And he's promoted stories of his fondness for motorcycles, rock 'n' roll music, and familiarity with China.

He speaks Mandarin, learned during his days as a Mormon missionary in Taiwan. (That experience could also be a liability: A recent Bloomberg Businessweek story raised questions about how and whether the Huntsman family business benefited during 2009 and 2010 when he served as ambassador.)

For their part, Democrats hope to paint Huntsman as a Romney clone who will be forced to abandon his once-moderate positions on issues like abortion and health care reform to appeal to more conservative primary voters.

Huntsman's campaign, in the lead-up to his announcement Tuesday, featured a quixotic online presence: a lone motocross rider, face obscured by a helmet, traversing the dramatic landscape of Utah with an overlay of music.

"The candidate for president who rides motocross to relax," said the online text.

In Iowa, as elsewhere, voters are waiting to see who will emerge from under that helmet.

"I have not followed him; I don't know what his issues are," says Darrell Kearney, finance director for Iowa's Polk County Republicans.

"If you want to run for president and you don't come to Iowa, you do so at the peril of your own political campaign."

Of course, if Huntsman succeeds, his strategy could chart a new course for future candidates — and help turn the Iowa caucuses into a quaint tradition rather than a crucial testing ground.