Accessibility links
Amid Sudan's Unrest, Ambassador Sees Chance For New Nation Ethnic killings and mass displacement of people are threatening to break the fragile peace agreement between the North and South in Sudan. Just three weeks before the South formally secedes from the North, violence in two border regions have raised fears about the outbreak of another bloody conflict in Sudan. Host Michel Martin speaks with Ambassador Princeton Lyman, U.S. Special Envoy to Sudan, about the recent outbreak of violence in the regions of Abyei and Kordofan and America's role in resolving the conflicts.

Ethnic killings and mass displacement of people are threatening to break the fragile peace agreement between the North and South in Sudan. Just three weeks before the South formally secedes from the North, violence in two border regions have raised fears about the outbreak of another bloody conflict in Sudan. Host Michel Martin speaks with Ambassador Princeton Lyman, U.S. Special Envoy to Sudan, about the recent outbreak of violence in the regions of Abyei and Kordofan and America's role in resolving the conflicts. 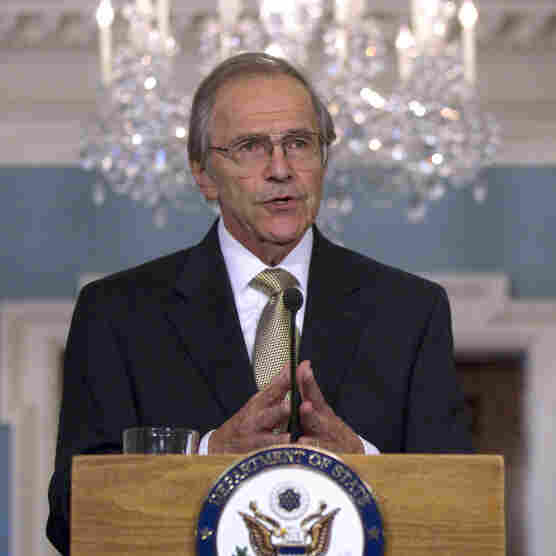 Ambassador Princeton Lyman at the announcement of his appointment as the new U.S. Special Envoy for Sudan, March 31, 2011, at the State Department in Washington. Evan Vucci/ASSOCIATED PRESS hide caption 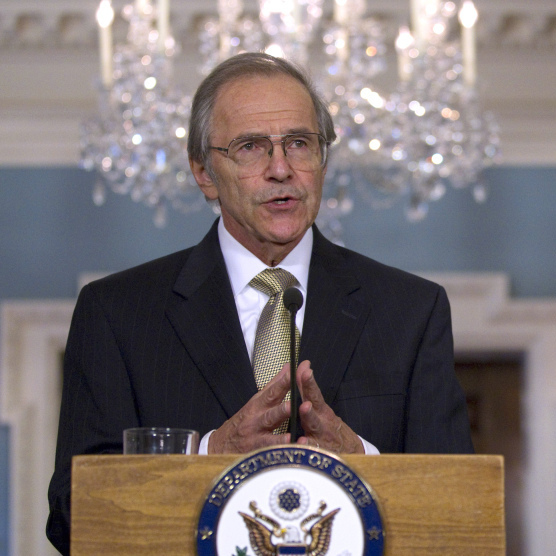 Ambassador Princeton Lyman at the announcement of his appointment as the new U.S. Special Envoy for Sudan, March 31, 2011, at the State Department in Washington.

Next to Ambassador Princeton Lyman, the U.S. special envoy to Sudan. Ambassador Lyman is here with us in our Washington, D.C. studios. He met last week with President Obama to talk about the conflict we've just been discussing. Ambassador, thank you so much for joining us.

PRINCETON LYMAN: It's my pleasure, Michel.

MARTIN: I wanted to get your perspective on the questions that I just asked reporter Jeffrey Gettleman. Do you feel that the negotiations are bearing fruit?

LYMAN: They're bearing fruit, but what happened in the last few weeks, and it's actually been building up for some months, is that the euphoria that we all felt after the referendum in January has declined. And there's a kind of a growing sourness of mood and bitterness and feeling things were going as well as each side wanted. And the tension built up particularly in the disputed area of Abyei.

And when the military took over there, and then the fighting started in Southern Kordofan, we found ourselves in a much, much worse situation than we had anticipated this close at the South's independence.

MARTIN: Last week, President Obama actually delivered an audio message addressing the situation. He delivered that via Voice of America. I'll just play a short clip of it. Here it is.

BARACK OBAMA: Today, I want to speak directly to Sudanese leaders. You must know that if you fulfill your obligations and choose peace, the United States will take the steps we have pledged towards normal relations. However, those who've flout their international obligations will face more pressure and isolation, and they will be held accountable for their actions.

MARTIN: Presumably the president talks to other leaders. You talk to these leaders all the time. What did you hope to accomplish with this public message that you could not accomplish with your face-to-face communications?

LYMAN: It's very important that people understand how closely the president follows Sudan. As you mentioned, we met and discussed the situation just last week. But the fact is we don't speak directly face-to-face with President Bashir because he is under indictment from the international criminal court.

So, it is a way to get a very high level and very public message. But it was also important to send the message to all Sudanese about the importance of moving through these very contentious issues and to completing the peace agreement.

MARTIN: How do you analyze or understand President al-Bashir's conduct? I mean, given that the eyes of the international community have been on him for quite some time as you just told us. He's been indicted by the International Criminal Court. What do you think he thinks he's doing?

LYMAN: I think in the last few months and then in particularly the last few weeks there was a feeling that they didn't get what they thought they would get by accepting the referendum and the succession of the South and a growing frustration and some argumentation within the government. And I think there was particular frustration within the Sudanese military when there were some attacks on those forces in Abyei in early May.

It was just the final straw for the military. And I think they insisted and others in (unintelligible) we have to strengthen our negotiating position on oil, on Abyei and all these places by demonstrating that we're the stronger party.

LYMAN: There is a tremendous amount of international focus on Sudan, and rightfully so. When you look at the map, the largest geographic country in Africa, it'll split into two. But it's sort of a link between the Middle East and Africa.

But, you know, it's the parties who have to make the ultimate decisions. They have to be the ones who finally come together. Compromise, make the arrangements. But between us all, I think we've had considerable influence on at least arresting the crisis in Abyei.

MARTIN: But what leverage actually exists? I mean, given all the pressure, given all the attention that has already existed over the years, President al-Bashir is still engaging in this course of action. I mean, according to the reports, there already have been atrocities. We don't necessarily know the scale, but that's already taking place. So, what leverage is there?

LYMAN: Well, the leverage is really in terms of what Sudan needs. And I'm talking about the government of Khartoum. What Sudan needs for its own welfare and stability and its population is to come out of isolation, have debt relief, get access to the World Bank and all of those things.

And it can't do that with the kind of behavior we've been seeing recently. But moreover, without bringing peaceful settlements, both with the South and Darfur. That's the most important leverage, but often it doesn't register as much with people who are angry or feeling that they've got the power regardless, et cetera.

But that's the ultimate leverage. And it's also the pressure from their neighbors, from Ethiopia and others saying we can't afford another crisis on the continent in our midst. You've got to solve this.

MARTIN: And, finally, if I may ask, as I mentioned earlier that there are a number of people in the United States, particularly in the faith community who remain engaged with this conflict and they're very concerned about the region. But what about those who are not? I mean, we see that there's increasing restiveness, if I can put it that way, among political leaders, particularly in the Congress, about the level of U.S. commitments overseas.

I'd like to ask, what is your message to those who feel that it's time, really, for the U.S. to pull out of a number of these conflicts and to focus the energies of the American government on domestic concerns?

LYMAN: Well, I can understand their concern very much, and we have invested a great deal in peacekeeping and peacemaking in Sudan. But the cost to us if it goes sour will be very great. The United States won't turn its back on a huge humanitarian disaster. So we'd end up spending billions of dollars just to keep people alive. And that's not the best alternative.

We also have a chance to create a new nation in Southern Sudan that can be a source of both good governance and good neighborliness and economic development in the region. I think this could end up to be one of those efforts in which we take great pride.

MARTIN: Ambassador Princeton Lyman is the U.S. special envoy to Sudan. He was kind enough to join us in our studios in Washington, D.C. Ambassador, thank you so much for joining us.

LYMAN: It's my pleasure, Michel. Thank you.