Accessibility links
To Some, Coming Out Isn't Just A One-Time Thing As part of gay pride month, Tell Me More's guests and friends who are lesbian, gay, bisexual or transgender are sharing stories of coming out to those closest to them. In today's essay, journalist Mary Buckheit says that coming out is a slow process — it doesn't happen just once.

As part of LGBT Pride month, Tell Me More's guests and friends who are lesbian, gay, bisexual or transgender are sharing their stories of coming out to those closest to them: family, friends and even co-workers.

Most people think of a person's coming out as one momentous day, or one unnerving phone call home, or one blurted sentence, even. But the truth is you come out a thousand times. 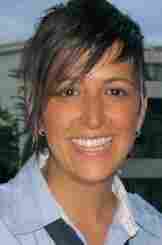 Mary Buckheit is a long-time contributor to ESPN. hide caption

First I told my childhood best friend over Christmas break my sophomore year in college. We were sitting in a quiet Connecticut pub on a Tuesday night 10 years ago. She was telling me her colorful college escapades with handsome swimmers, and a skinny football player and two nice boys from Bergen County.

I didn't want her to stop talking. I didn't want it to be my turn. When the inevitable lull in the conversation came, and the focus shifted to my side of the table, I tilted my wine glass back for one last swallow of courage and said, "You know what? What would you say if I told you I've actually been seeing someone?"

I was certain she had no idea that I had a girlfriend. How could she? She had no idea I was gay. At least I thought. Until she dropped her chin, looked me in the eyes and remarked, "I'd probably say, 'How long have you been seeing her?'"

Sometimes we don't give people enough credit. Like my grandmother. When discussing lady friends with the 90-year-old Italian, she explained her very pragmatic rationale for approval. "Oh, I like lesbians. They cut my lawn real nice," she said, "way better than that other guy I used to pay."

Sometimes people surprise you. And sometimes you surprise people.

When my mom found a note to a girlfriend in the wash, she alerted my sisters. My lesbian sister was certain Mom's panic was erroneous — just a result of having a gay son and one gay daughter, already. Surely mom was just being a little skittish. But mom was right.

Indian Journalist Comes Out To Her Mother

Indian Journalist Comes Out To Her Mother

I came out to much of my extended family, friends and the rest of the free world in a story I wrote as a columnist for ESPN.com. A basketball player had said he wouldn't want a gay teammate because he hates gay people. I had to take a stand. My story prompted some 500-plus emails from strangers, most warmly detailing support for me and their gay loved ones.

I never did come out to my dad before he passed away suddenly when I was 22 years old. I adored my father. I lived for his approval. I often wonder if I would have ever told him. I just don't know how my father would have taken the news.

But I am able to rest easy knowing how Father Dan took the news. He was the priest who was tasked with hearing confessions the day I nervously knelt down in the Siena College chapel. "Bless me, Father, for I have sinned," I began, as usual. I started with a few minor transgressions: "I lied to a friend. I broke my teammates' earbuds. I cheated on a calculus exam. And I'm gay."

I started crying. Father Dan, who also happened to be my World History professor, put his hand on my shoulder. He asked me if I was telling him that because I thought it was a sin. And then he quoted a Bible verse. "Don't be afraid," he told me softly. "Indeed, the very hairs of your head are all numbered. Do you know what that means, Mary? God knows how many hairs are on your head! God knows everything about you. He created you. Don't be afraid."

Mary Buckheit is a journalist in San Diego.