Accessibility links
Obama's Awkward Dance On Gay Marriage When gay and lesbian organizers planned an Obama fundraiser in New York for this week, they didn't know it would coincide with a debate over legalizing same-sex marriage in the state. That puts the president, who opposes gay marriage, in a tricky position. 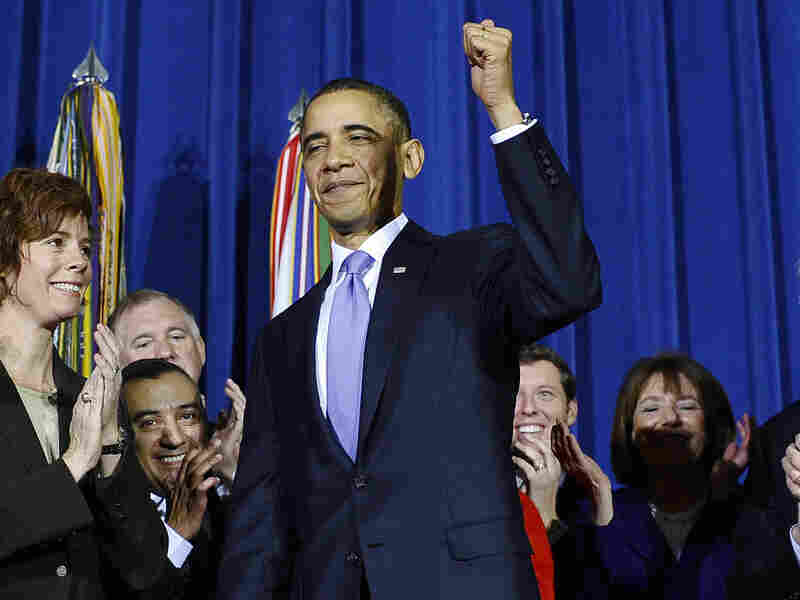 On Thursday, the president will visit midtown Manhattan for an event that's expected to raise hundreds of thousands of dollars for his campaign coffers. This is the first LGBT fundraiser by a sitting president running for re-election, and it could fall the same day as a vote to legalize same-sex marriage in New York's Republican-led state Senate. That makes this a potentially uncomfortable marriage of money, politics and social change.

"Justice Stares You Right in the Face"

The organizers of Thursday's event had no idea it would coincide with a potentially historic moment in New York, says gay activist David Mixner. "I certainly didn't, and I find it highly amusing," he says.

Amusing because, as Mixner puts it, "You lay out all these plans and try to be as political as you can on this issue, but in the end justice always stares you right in the face."

Mixner, who has been a longtime supporter of Obama, will attend the fundraiser on Thursday. He says the marriage issue will be impossible for the president to overlook. "Dick Cheney's for marriage, Laura Bush is for marriage, [former RNC Chairman] Ken Mehlman's for marriage," Mixner says, "so get with it."

When Obama last weighed in on this issue in December, he said that while he does not support marriage for same-sex couples, his feelings are "constantly evolving."

"At this point what I've said is that my baseline is a strong civil union that provides them the protections and the legal rights that married couples have," said Obama.

It's a little awkward for the White House, because during the 1996 Illinois state Senate campaign, candidate Barack Obama responded to a questionnaire with a letter saying, "I favor legalizing same-sex marriages, and would fight efforts to prohibit such marriages."

"How much of a civil rights hero you are is determined by the times you live in."

In an interview last Friday at a conference of progressive bloggers, White House communications director Dan Pfeiffer backpedaled. "That questionnaire was actually filled out by someone else, not the president," Pfeiffer said.

Then on Monday, White House spokesman Jay Carney said Pfeiffer was wrong. "Dan was referring to another questionnaire," said Carney in the White House briefing.

In other words, Obama did state in 1996 that he supports gay marriage — a very progressive position for the time. But at least publicly, the president no longer holds that view.

Now the president is headed to New York, where a Republican-led state Senate could pass a gay-marriage bill any day. It sets up a potentially difficult situation for the president, who is asking same-sex couples at the fundraiser to pay as much as $35,800 for the evening.

A History of Support

As the White House is quick to point out, Obama has taken steps to advance gay rights in other areas. Many consider his high-water mark to be the signing ceremony to repeal "don't ask, don't tell."

"You've been asked to carry the added burden of secrecy and isolation, and all the while you've put your lives on the line for the freedoms and privileges of citizenship that are not fully granted to you," he told a tearful audience before signing the bill.

Obama's supporters say he has done more for gay rights than any president in U.S. history. But John Aravosis, who edits the liberal website Americablog, argues that history is the wrong yardstick.

"The point is, how much of a civil rights hero you are is determined by the times you live in," says Aravosis.

"If you defended the rights of African-Americans to swim in your pool in the 1950s, you'd be a huge visionary and we'd give you a huge attaboy for that," Aravosis says. By 1970, the same views would hardly be noteworthy even though they would be ahead of every previous generation.

Indeed, today many national polls show that more than half of Americans support same-sex marriage. That puts Obama among a minority of Americans on the issue, and a small minority of Democrats.

Still, no one expects this difference of opinion to sour the mood at Thursday's fundraiser. The singer Audra McDonald is performing. The actor Neil Patrick Harris is the emcee. As activist Mixner says, this is a gala. "Do not expect this to be a serious evening of policy."