Accessibility links
Schools Blend Computers With Classroom Learning In an era of budget cuts, some schools are trying blended learning — where students in a class are divided into groups and then they split time between computer lessons and instruction with a teacher. The blended approach helps keep the feel of a small class without the cost of additional staff. 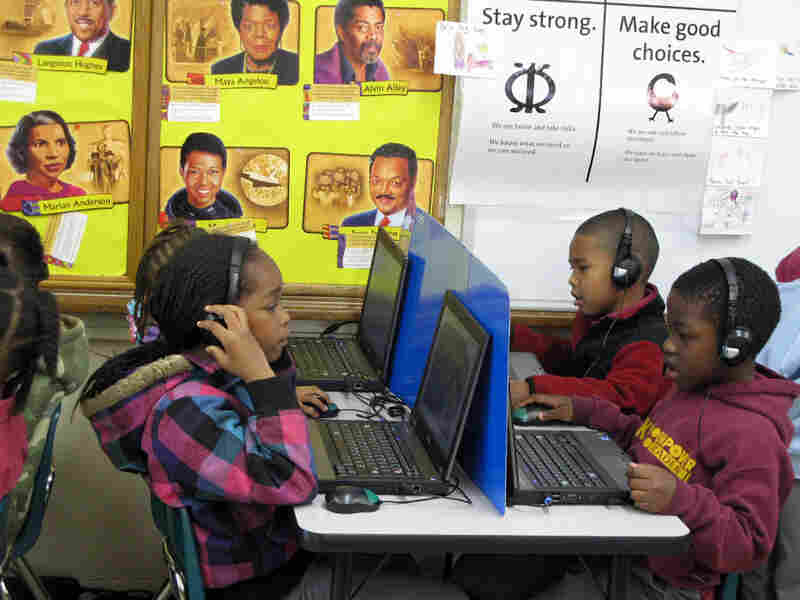 Kindergartners at KIPP Empower Academy in South Los Angeles work on laptops while in another corner of the room, a group of students do an activity with a teacher. Larry Abramson/NPR hide caption 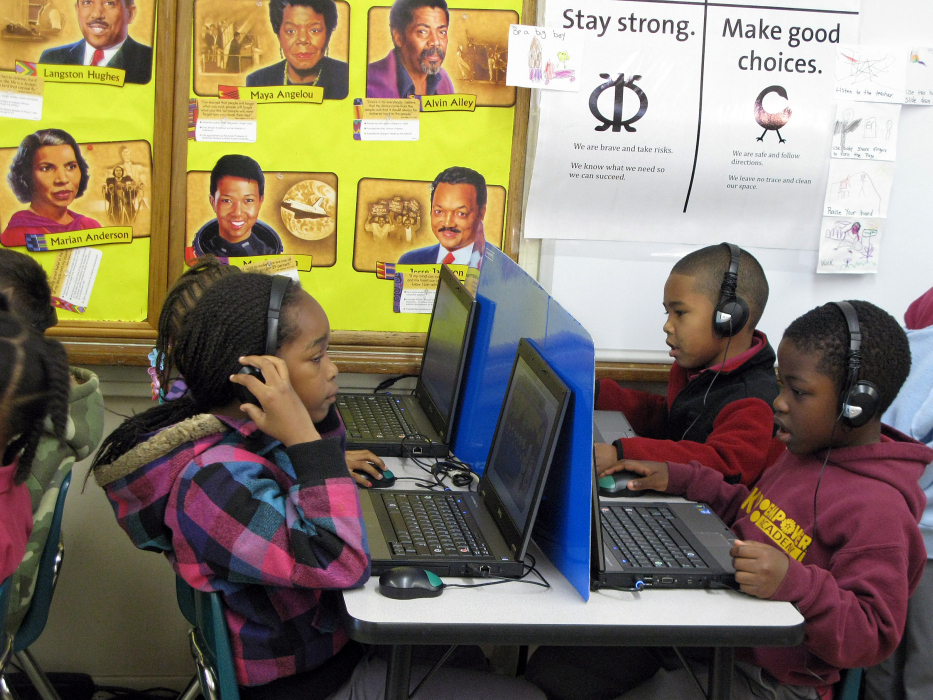 Kindergartners at KIPP Empower Academy in South Los Angeles work on laptops while in another corner of the room, a group of students do an activity with a teacher.

Part 1 of a two-part report

Many school districts are reluctantly cutting staff and dropping courses in a desperate effort to respond to tighter budgets. But some educators are looking at ways to save money and improve instruction at the same time.

The answer for some schools: blended learning, which is part computer lesson, part classroom instruction.

KIPP Empower Academy in South Los Angeles has had to make virtue out of dire necessity. Just as this nationwide network of charter schools was opening up a new kindergarten here, the amount of state money began to dry up. Principal Mike Kerr says he saw only one way out: raising class size.

"We had to cut out one whole classroom. So went from five classes of 20 to four classes of 28," Kerr says.

To prevent an erosion of quality instruction in the face of bigger classes, Kerr says he turned to computers.

In a kindergarten class, for example, some students work on a small-group vocabulary lesson while other students work on a lesson on computers in another corner of the room. After some time, the two groups swap places. The idea is to keep the feel of a small class without the cost of additional staff.

When the kids are on the computers, they get help from Elizabeth Flottman, the school technology consultant. She says the kids stay on task, even when she has to leave the room.

"I can walk out of this classroom and work with the children in the other classroom for five or 10 minutes, and I feel like most of the time I can come back into the classroom and they are all engaged," Flottman says. (There are always two adults in the room with the kids.)

It is not easy for very young kids to learn how to work independently like this. Teacher M.J. Mathis says KIPP students practice these things in the program's special summer school.

"The biggest challenge for us is teaching them how to sit at the computer, how to use the mouse, how to enter their password," Mathis says. KIPP spends a lot of time rehearsing these skills early in the year.

In Northern California, Rocketship Education has its own flavor of blended learning. Rocketship has three charters around San Jose. At Mateo Sheedy Elementary, kids rotate through classes they way high schoolers do. They go to the English teacher for English instruction, and they also spend 100 minutes each day in Rocketship's computer lab.

Kids log in and start work on math or reading lessons appropriate for their grade level. The reading lessons follow the pattern of most digital learning: Kids read stories and are rewarded for the right answers.

A loud blast of music is the cue for kids to leave the computer lab so the next group can come in. With up to 100 kids in the lab at one time, it gets pretty noisy, especially when lunch is going on in another corner of the room.

Rocketship admits that the setup isn't ideal, but strong improvement at all three schools seems to show that something is working here. Despite high poverty rates, Rocketship's Mateo Sheedy school got higher test scores in math and reading than several affluent elementary schools in Silicon Valley.

John Danner, the founder of Rocketship, says the computer lab is a place to practice fundamentals and work on exercises that shouldn't be taking up valuable class time.

"So if you can move the basic skills to the learning lab with tutors and technology, really, there aren't a lot of teachers who would say, 'Gee, I really miss teaching that basic skill.' They'd much rather teach kids how to think," Danner says.

At Rocketship, the computer lab is staffed by volunteers and members of the community. Danner says that allows him to plow more money into other areas of instruction.

One of the upsides of having all your students online is that teachers get tons of data in the form of reports on their students' computer work. Teachers get regular printouts showing them how long kids have spent working on an exercise and where they are having problems.

There's a weak spot in this endeavor. Even enthusiasts admit that software offerings for young students are still lacking. Leaders of the blended learning movement say it's hard work finding programs they are happy with and that they can correlate to California's learning standards. They are hoping that as their efforts spread, that will spark software developers to meet the demand.