Accessibility links
Volatile Food Prices Grab G-20's Full Attention A meeting of agriculture ministers comes as some experts are predicting another rise in grain prices like that of 2008, which sparked panic and deadly riots. A relief organization estimates rising staple prices have pushed 44 million into poverty in recent years.

Agriculture is topping the G-20 agenda for the first time as agriculture ministers from the world's largest economies gather in Paris beginning Wednesday. 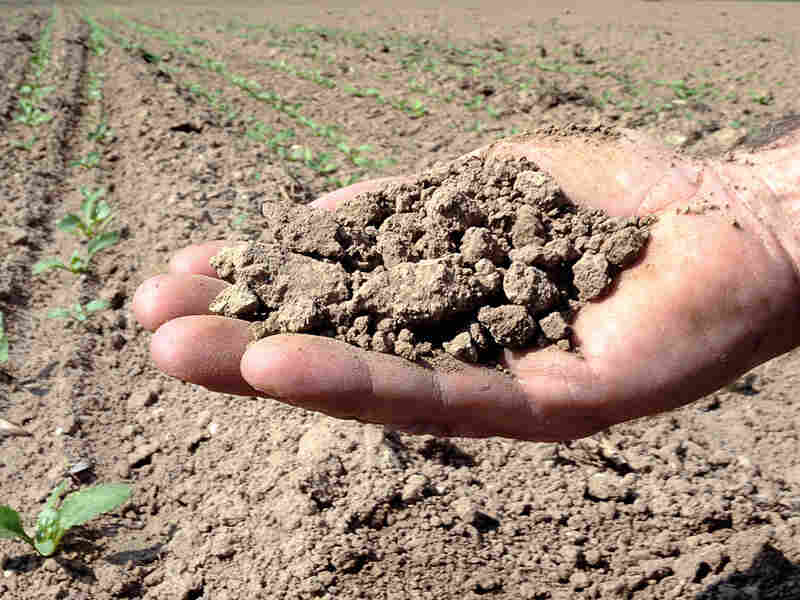 Earth from a beet field in northern France hit by drought — the country's worst in 50 years. Crop shortages in Europe and the U.S. have led some experts to predict a rise in grain prices like those that sparked riots in 2008. Philippe Huguen/AFP/Getty Images hide caption 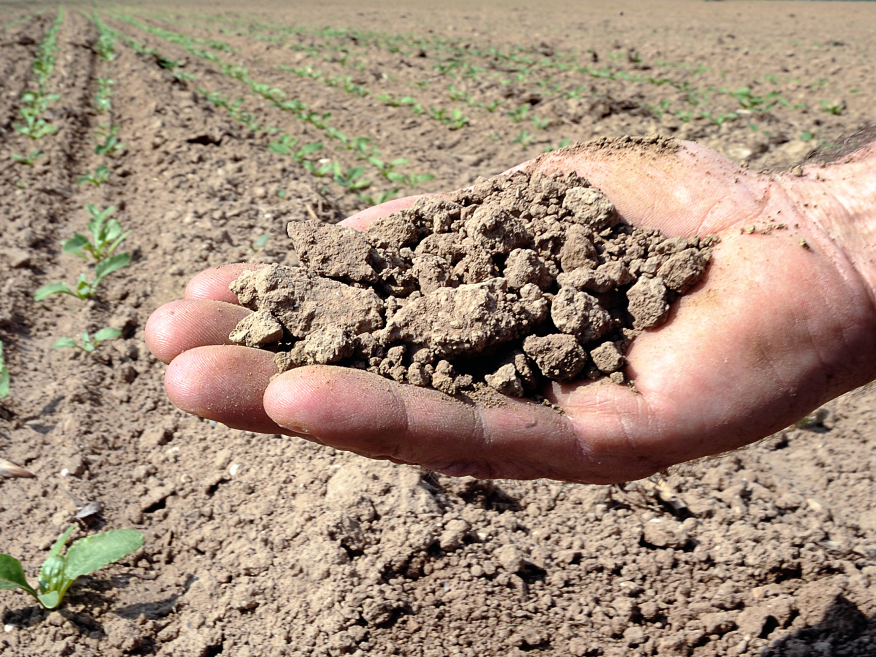 Earth from a beet field in northern France hit by drought — the country's worst in 50 years. Crop shortages in Europe and the U.S. have led some experts to predict a rise in grain prices like those that sparked riots in 2008.

Ever since a dramatic spike in world food prices in 2008 sparked panic and deadly riots in countries across three continents, agriculture and food security have become issues of global, political importance.

And crop shortages this year have some experts already predicting another rise in grain prices like that of 2008.

Jean Louis Champy grows wheat on the rolling plains of northern France, in a fertile stretch of land known as the breadbasket of the European Union.

But this year's drought — the worst in 50 years — has likely cut his harvest by a third. Champy and his dog wade into a field of wheat that is toasted golden brown.

"Here, we have half the usual number of heads on the wheat, and the stalks are much shorter then they should be," Champy says. "This wheat should be green and still growing, but it is already at full maturity and ready to be harvested. And it's only June."

Champy is not alone. Fires and drought have stunted wheat crops elsewhere in Europe, and this year's U.S. corn crop has also been hit by drought.

David Nabarro, a food security expert with the United Nations, says that for decades governments thought they didn't have to worry about agriculture, because prices stayed even or dropped. But 2008 changed all that.

"Food became an issue that was of central political importance to presidents [and] heads of governments," Nabarro says. "In addition, we found that food production systems were getting intertwined with environmental issues and climate change. So food and agriculture has now become a big political issue."

We found that food production systems were getting intertwined with environmental issues and climate change. So food and agriculture has now become a big political issue."

David Nabarro, a food security expert with the U.N.

Nabarro says decision-makers must find ways to ensure sustainable agricultural growth to feed a planet of 9 billion people by 2050. Production must be increased, but market distortions must also be addressed. Countries need to work together, Nabarro says. The food crisis in 2008 was worsened when some countries panicked and began blocking their exports.

President Nicolas Sarkozy of France, which is hosting the G-20 this year, has made fighting food price volatility a central plank of the G-20 agenda. In particular, Sarkozy has called for controlling excessive commodity market speculation that exacerbates food price swings.

Last week, ahead of the agriculture ministers' meeting, farmers from 120 nations gathered in Paris, calling their meeting the G-120. Wheat farmer Robert Carlson, head of the North Dakota Farmers Union, was there; he says it is now vital for farmers to understand the global situation and not just what's happening in their own country.

"What we have become interested in, in the United States, is this question of are we really in a new era now when, instead of dealing all the time with how to get rid of surpluses, the challenge is going to be to grow enough food for the world?" he asks. "Are we really there?"

Recent reports by the U.N. and food relief organizations predict that global food prices could double in the next two decades, affecting the world's poorest people. Relief organization Oxfam estimates that in the last few years, rising staples prices have pushed 44 million people into poverty.

Farmer Djibo Bagna from Niger says his continent is in peril.

"Those who bear the brunt of shortages and hunger are not countries in the G-20, but mostly African farmers," Bagna says. "So it's important that our leaders be able to participate in world meetings on agriculture."

These farmers say they hope G-20 agriculture ministers will be able to agree on at least a broad action plan to curb price and market volatility in the agricultural sector.

But given the different agricultural interests of the G-20 nations, that is doubtful, say food security analysts. Still, they say the fact that the world has come together to talk about it is a huge step.

Mozambique's Struggles Fueled By The Price Of Bread June 7, 2011
Food: The Hidden Driver Of Global Politics May 17, 2011