Accessibility links
Political Transformation Of Egypt Moves Slowly Parliamentary elections are set to be held in Egypt in September. But pro-democracy activists are calling for more time. Otherwise, they warn, better-organized forces will gain power. 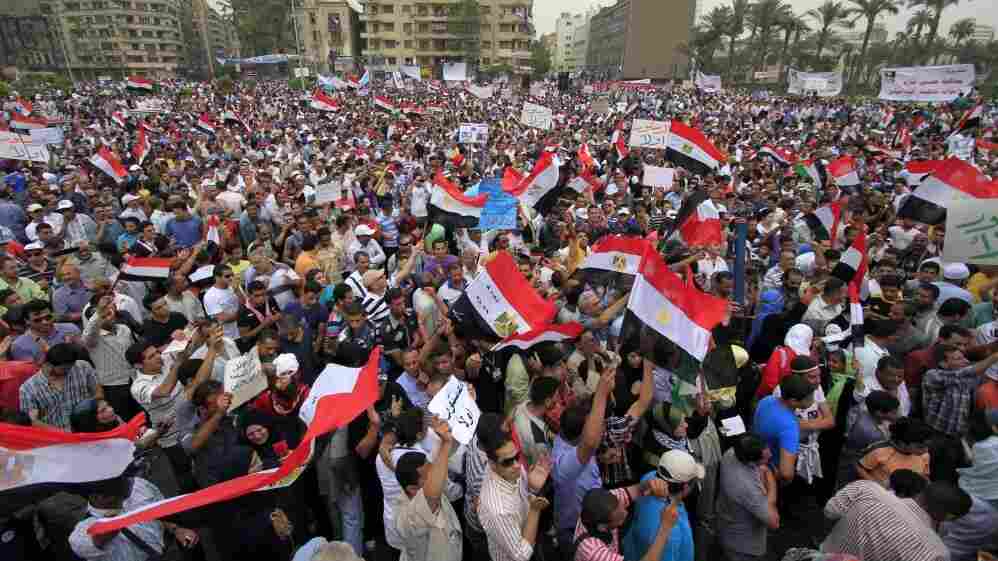 Egyptian protesters wave national flags as they attend a rally in Tahrir Square in Cairo on May 27. Khalil Hamra/AP hide caption

Four months after Egyptian President Hosni Mubarak was ousted, the military remains firmly in charge. But the question of who will ultimately control the country remains wide open.

The army will clearly remain a powerful influence. Memories remain strong of the 1952 revolution against the monarchy — when army officers pledged a transition to democracy but gradually consolidated their hold on power.

For all the changes still occurring within Egypt's government, the country is expected to remain an ally of the United States. Just maybe not as reliable as it once was.

Analysts do not predict any major rift when it comes to the major areas of cooperation between the two countries, including strong ties between the militaries and continuing peace with Israel. But no one expects Egypt to be as compliant as it was under deposed President Hosni Mubarak.

Egypt will instead take steps that will occasionally anger the U.S., such as its recent decision to open its border with Gaza. "Frankly, you can't get away with what Mubarak was getting away with," says Joshua Stracher, a Kent State political scientist.

But the U.S., for its part, is frustrating some Egyptians. President Obama last month unveiled a $2 billion aid package for Egypt and Tunisia that was considered modest in the Middle East. Congress doesn't appear likely to approve anything more, however.

That leads some analysts to suggest that the U.S. is missing a bet by not doing more. Egypt remains central to the nation's strategy for the region.

"You have a very broad sense in the Middle East that Egypt is the most strategic thing in play and that the U.S. isn't doing enough to nudge it in the right way," says Jon Alterman, senior fellow at the Center for Strategic and International Studies.

But today's military has made it clear that it doesn't, ultimately, want to be in charge. "They don't want to govern during what is going to be a turbulent period economically," says Shibley Telhami, a Middle East scholar at the University of Maryland.

If the military is wary of bearing full responsibility for running the country over the long term, so is the Muslim Brotherhood. The Islamist group led the opposition against Mubarak in the years leading up to this past winter's upheaval and remains perhaps the best-organized political force in the country.

Opening Up A Power Vacuum

Still, the Muslim Brotherhood is aware that the prospect of its coming to power creates anxiety for many Egyptians and the international community. The group has pledged to limit its reach for now and says it won't put up a candidate for president, nor contest a majority of parliamentary seats.

"They envision having a significant number of seats in Parliament, which would allow them to be a kingmaker," Telhami says. "Ideally, they'd like to be the kingmakers without being accountable."

The military and the Muslim Brotherhood appear to have come to some tacit understanding about the roles each will play in the political process in the coming months. But who, then, will fill the vacuum?

No one resembling a front-running candidate has emerged in the nascent presidential contest. Meanwhile, the organizers of the pro-democracy demonstrations that brought Mubarak down are pleading for more time to get their political operations in shape.

"I am surprised, and I think many Egyptians are, that we haven't seen a more rapid consolidation of the opposition into an actual political movement, or string of political movements," says Jon Alterman, director of the Middle East program at the Center for Strategic and International Studies. 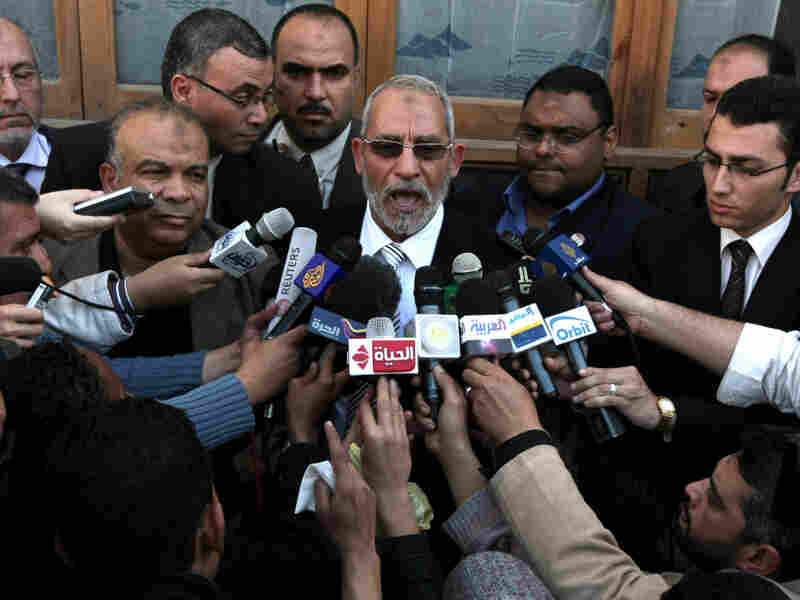 Mohammed Badie, the head of Egypt's Muslim Brotherhood, speaks to the press in Cairo on March 19. Democracy activists argue that the timetable for elections is too rapid and will give the advantage to the Muslim Brotherhood and elements of Mubarak's old party. Mahmud Hams/AFP/Getty Images hide caption

The popular referendum approved in March calls for parliamentary elections to be held in September. Parliament will then appoint an assembly to rewrite the Constitution and pave the way for presidential elections.

Democracy activists argue that timetable is too rapid. Early elections, they contend, would give the advantage to the Muslim Brotherhood and elements of Mubarak's old party. They want more time to get ready.

About three dozen youth and political groups are supporting a "Constitution First" platform, seeking to change the sequence of how the country's laws are revised. They received a boost on Sunday when Prime Minister Essam Sharaf said he would support delaying parliamentary elections beyond September to give the "political landscape" more time to jell.

Some Power Through Protest

The youth and political groups are collecting signatures in support of such a delay and are calling for a massive rally in Cairo's Tahrir Square on July 8 in support of their cause.

Protests in the now-legendary square have remained a regular feature of the post-Mubarak era. Protesters have won important concessions from the Supreme Council of the Armed Forces, the military junta running the country, such as subjecting Mubarak and his sons to criminal investigation.

"It's been kind of remarkable what the protesters have been able to accomplish," says Jason Brownlee, a government professor at the University of Texas. "Every time they go out and do a protest in Tahrir, they seem to get a concession."

But protests won't forever remain the primary means of political expression. Once elections are held, the new government will have to deal with public demands.

Telhami, the Maryland professor, is optimistic that holding elections will "transform" Egypt's political environment. "The people who organized the uprisings in the first place are not going to let an elected government get away with going backward."

Not all observers of the situation in Egypt are so sanguine. The Muslim Brotherhood, while shying away from seizing political power in the near term, will want to play a large role in setting the policy agenda.

And the military will continue to have its influence as well. It may continue to play a role akin to that of the military in Turkey in recent decades, which has occasionally stepped in and overthrown civilian governments that pursued a course that the military opposed.

Some worry that the types of liberalizing changes allowed by SCAF have been cosmetic, at best, such as renaming the old state security agency.

"The security apparatus is essentially unchanged and the military's always been the core of the regime, anyway," says Joshua Stacher, a political scientist at Kent State University.

"This leads me to believe we're in a situation where we're seeing the reconstruction of authoritarian institutions," he says. "All this doesn't really bode well for the kind of changes that people aspired to on Feb. 11, when Mubarak left."

A previous version of this story incorrectly said that Hosni Mubarak had left office five months ago. It was actually four months ago.